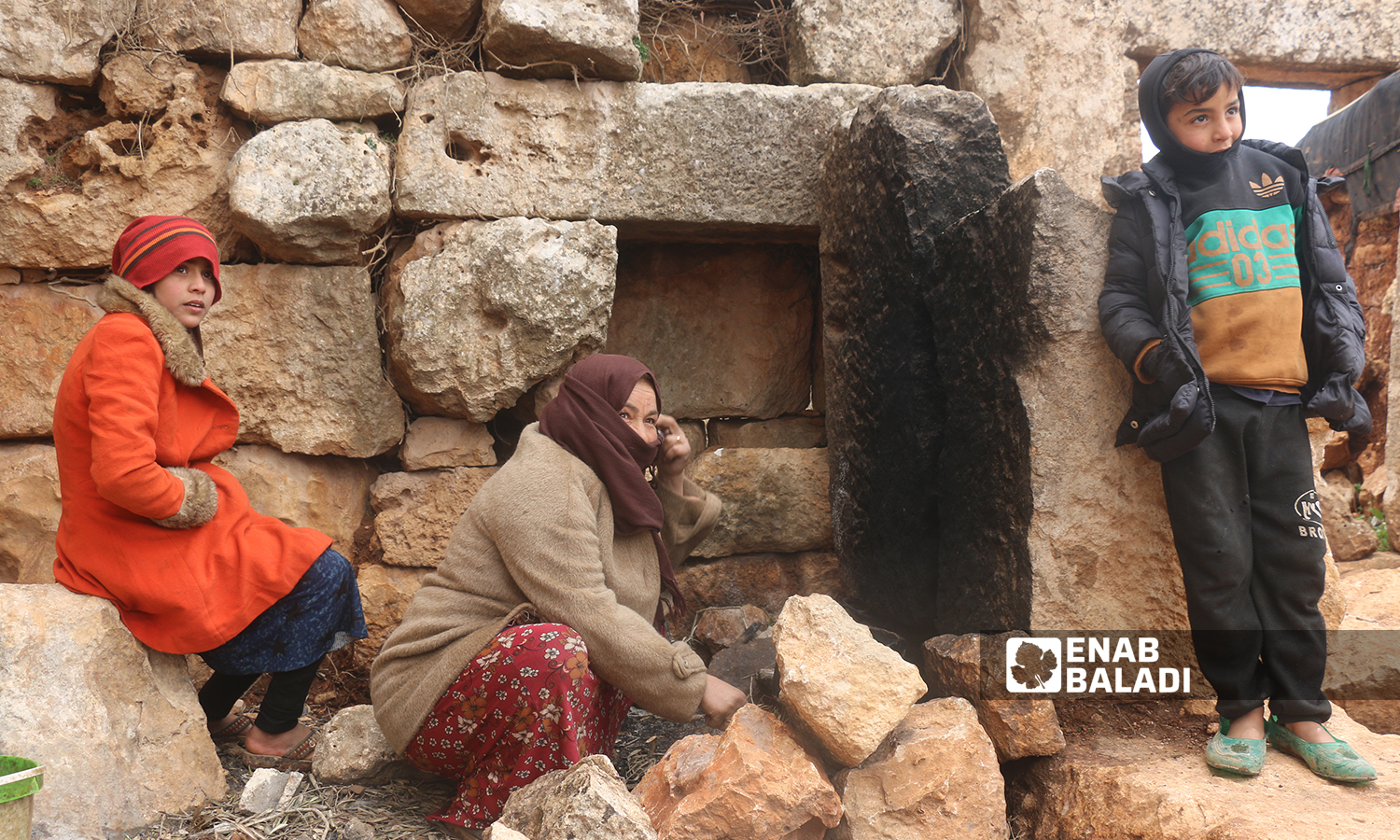 The 45-year-old Eida al-Hassan squats next to a high relic wall dating back to the Byzantine era, along with her children. She lights a fire to make lunch, defying alone low temperatures and life hardships since her husband passed away seven years ago.

Al-Hassan set up her tent three months ago in the archaeological site of Sarjableh at the Deir Hassan area in the northern countryside of Idlib.

Talking to Enab Baladi, al-Hassan said she culled this place to live in because it was free, as she is not obligated to pay rent like what she used to do for an agricultural land near the town of al-Dana.

She used to rent a house, but when she was unable to pay, the landlord evicted her in December 2021. The stranded woman was in the open, with no shelter for her and her children.

Being reliant mainly on monthly humanitarian aid to provide her families’ needs, al-Hassan is terrified of snakes and scorpions during summer in her current residence. In addition, she is terrified of the potential falling of stones from the high ancient walls due to the absence of antiquities restoration.

The tent, in which Eida and her children reside, is also filled with holes that allow the entry of snakes, insects, and even rainwater during the current winter season.

Idlib is one of the richest Syrian governorates in terms of ancient antiquities and remains; it owns alone a third of Syria’s antiquities that date back to different eras and civilizations since the fifth millennium BC. These antiquities belong to the various Aramaic, Greek, Roman, Assyrian, Byzantine, and Islamic eras, some of which are included on the World Heritage List.

In a previous investigation titled “Idlib’s Antiquities: Tragic and Forgotten,” Enab Baladi interviewed the director of the Idlib Museum, Aymen al-Nabou, regarding the momentousness of the antiquities in Idlib and the destruction that has befallen it.

The archaeological zones and human heritage sites were subjects to numerous violations during the past years of conflict, including air force raids and barrel bombs from which the museums of “Maarat al-Numan” and “Idlib,” as well as the archaeological sites of forgotten cities, were not spared, al-Nabou added.

An official at the Syrian Salvation Government’s Ministry of Development and Humanitarian Affairs told Enab Baladi that the competent authorities of the government operating in the region are seeking to come up with the appropriate solutions for residents of the camps in the archaeological sites.

According to Mohammed Abdulsalam Ghazal, the Director of the Public Relations Department in the Ministry, tents are considered temporary housing within random displacement camps because of the constant bombardment.

He stressed that there were future plans to address the problem, as the Development and Humanitarian Affairs Ministry sought to organize the camps “by transferring inhabitants to organized and serviced camps. “We have also moved many of them according to certain specific priorities,” he added.

The Syrian Antiquities Act also stipulates that municipalities may not grant construction and restoration permits in the vicinity of archaeological sites and historical buildings only with the approval of the archaeological authorities to ensure that modern buildings were built in the style they deem appropriate for the archaeological character.

The legislator has also restricted the competent ministries, departments, and committees to the need to obtain the authorities’ approval when designing town and village planning, organizing projects, and implementing co-property cancellations, which reveals a genuine concern about safeguarding monuments and archaeological sites from encroachment, even if they were carried out by public authorities.

Many violations have affected the Idlib ruins during the long years of armed conflict. The history-rich region was heavily bombarded by Syrian regime forces and the Russian air force, which have pursued a scorched-earth policy in many of its areas.

In addition to the battles, the random IDPs camps that are being built in several areas of Idlib play a negative role in ruining some of the archaeological sites, in which the displaced have found a place to live rather than paying amounts that exceed their financial capacity as rent for land of individual ownership.