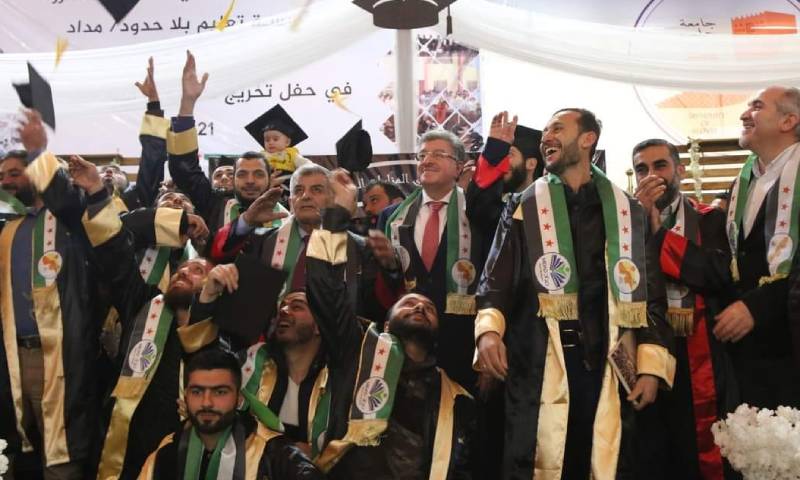 In Aleppo’s northern and eastern countryside, as elsewhere, litigations over financial and social problems are quite common and are addressed by the judiciary within the usual working mechanism of lawyers.

However, since the region is run by the de facto authority of the Syrian Interim Government (SIG), real concerns started to rise among locals in regard to the future of law practice in the northern and eastern countryside of Aleppo governorate.

Such concerns are justifiable as all law practices are linked to official government institutions and their administrative decisions, legislations, and judicial rulings.

Under Syria’s overall instability, any military or political change in the region might negate the legitimacy of the SIG and its institutions for the benefit of the new political or military power, destabilizing the legal grounds on which law practice is based.

Such a scenario raises questions about the point of studying law in the region’s universities and the future of law graduates in the labor market.

Mohammad Haji Bakkour, 24, joined the law faculty of Aleppo Free University to fulfill his childhood dream of becoming a lawyer.

Bakkour, who graduated in 2021, told Enab Baladi, “Law study ensures a promising career and a broad range of professional roles. It has helped me understand life right. I have no fears for the future or about any change to the region because the nature of our study prepared us to take up various works.”

Bakkour, originally from al-Atareb city, intends to join the Free Bar Association in the region and start working as a lawyer in court halls.

“We studied Syrian, French, and Egyptian laws at the university, and our educational materials are somehow similar to those taught in other faculties in Syria,” Bakkour said.

Aleppo Free University has over 13 faculties and four technical institutes in Aleppo, Idlib, Homs countryside, Damascus countryside, and Daraa and is unrecognized by the regime’s government.

In late 2017, the Syrian Salvation Government (SSG) took control of Idlib governorate and parts of Aleppo’s western countryside. As a result, Free Aleppo University’s faculties and headquarters in the al-Dana town in northern Idlib were closed in 2018, forcing the SIG to move its headquarters to Aleppo countryside.

Thirty-year-old Ahmad al-Harah, a law graduate in 2020, shared with Enab Baladi his fears in regard to low employment opportunities in the liberated areas and the possibility of a change in legal references, under which he and other lawyers practice their work.

“We have studied international public law, international humanitarian law, and Islamic jurisprudence. We also studied all types of Syrian civil, commercial, and penal laws and some Arab established laws. The educational methodology and plan were good, but is this enough in practical life?”

Al-Harah, whose study was interrupted due to displacement circumstances and military hostilities against the northern Syrian region, does not feel confident about the feasibility of the teaching plan in the law faculty from which he graduated and whether it would allow him to work as a lawyer in all Syria, which became divided to many territories run by different political and military trends.

Al-Harah, currently a trainee lawyer at one of the region’s law offices, said, “Even though our legal role might be affected with changing political and military situations and that we might not be able to implement certain rulings in the future, it is necessary to have lawyers in the region to defend people’s rights, represent them legally, and help them by providing professional legal advice and counseling.”

The adoption of Syrian laws

Lawyers intervene within the competence of their work in all court proceedings and take measures to ensure the rights of their clients. They make efforts to enforce judicial decisions and make necessary arrangements to comply with duties and obligations outlined in the law.

However, lawyers are bound by their own jurisdiction and cannot practice their roles unless they were citizens in the country where they wish to practice law or within the principle of reciprocity.

The principle of reciprocity is applied among different states by allowing foreign lawyers to practice their legal roles on their lands; nevertheless, this issue is more complicated in northern Syria’s territories.

Moreover, the regime government does not recognize the de facto authorities operating in northern Syria, nor does it acknowledge any decision by them, including judicial decisions or administrative and executive decisions relevant to the acquisition and recognition of the right of persons to practice law. This, in turn, threatens the future of lawyers’ work in the event of any political change in the region.

Under the Eighth United Nations Congress on the Prevention of Crime and the Treatment of Offenders, held in 1990, every person has the right to “call upon the assistance of a lawyer of their choice to protect and establish their rights and defend them in all stages of criminal proceedings.”

“Governments shall ensure that lawyers are able to perform all of their professional functions without intimidation, hindrance, harassment, or improper interference.”

The Free Aleppo University takes into account the issue of its recognition as a higher education institution in Syria, particularly for its Faculty of Law and all disciplines that require licensing by administrative decisions issued by official institutions.

The judicial authority in the SIG-held areas was formed through reliance solely on jurists for judicial work.

It was agreed to adopt the Syrian laws of the 1950 Constitution to run people’s affairs and resolve litigation under international legal regulations and rules besides the Syrian law.

Accordingly, “A law graduate of Aleppo Free University can join the Free Bar Association,” according to al-Sheikh, who added that the recognition of law students’ certificates remains subject to political change.

The need to qualify lawyers

According to al-Sheikh, the training and qualification of lawyers are necessary for the current phase in the SIG’s areas to manage people’s affairs, regardless of the issue of formal recognition of college graduates’ certificates.

The production of new generations of lawyers is part of a chain that includes judicial bodies in the northern region and administrative and security institutions that need legal professionals to prevent violations.

In a previous talk to Enab Baladi, Syrian judge and legal researcher Abdulrazaq al-Hussain said that courts in the territories of the Salvation and the Interim governments were founded as a response to the “exigencies” of the absent regime institutions, including the judiciary; the people’s need for a body to oversee and lay judgments regarding their renewed cases and disputes; and the people’s wish to achieve some sort of social, economic, and financial stability, as well as build community peace.

These needs and goals “are largely dependent on these courts’ ability to respond to the people’s needs and resolve their problems, which remains a difficult thing to achieve,” al-Hussain added.