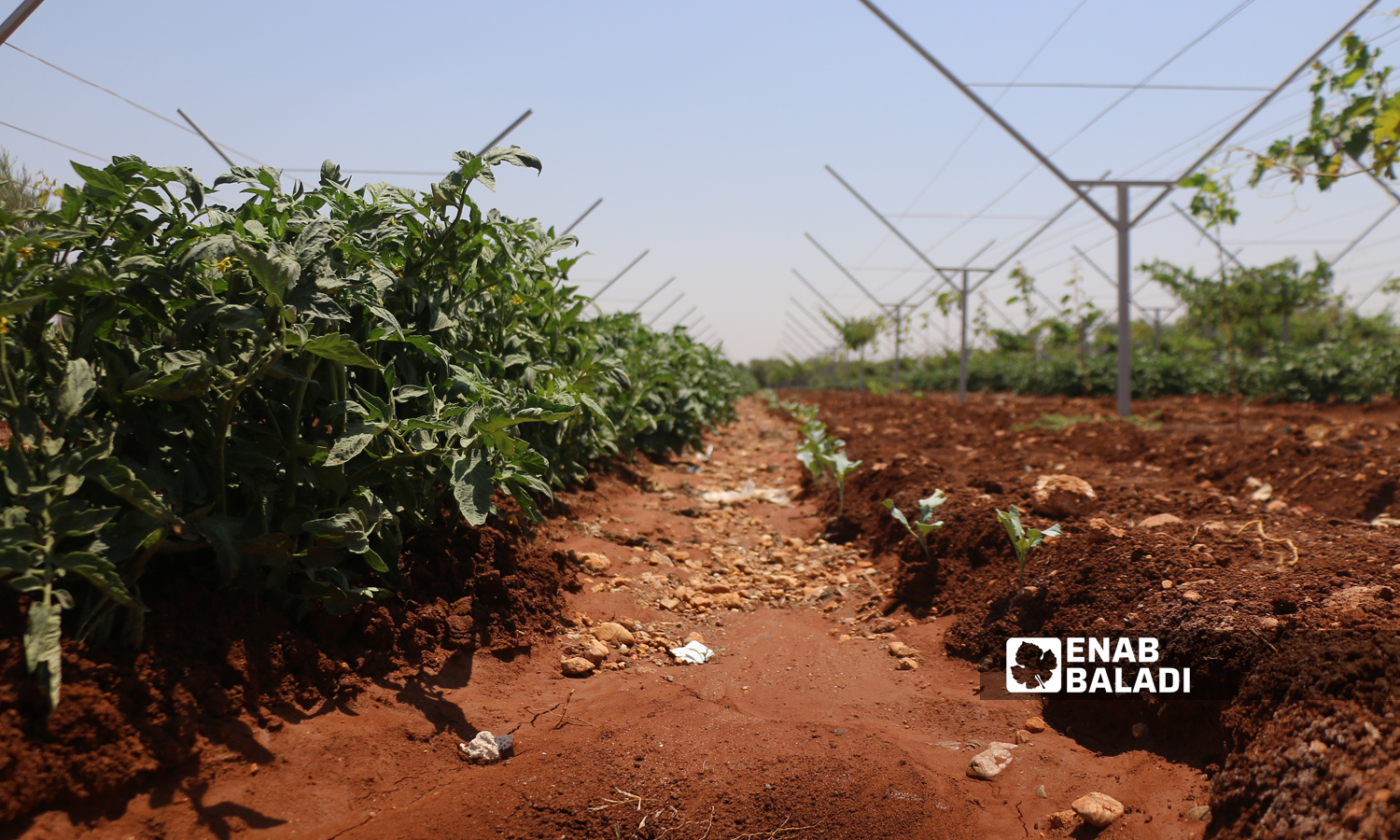 Ahmad Jijoe, a farmer in the city of Suran, north of Aleppo, had no choice but to pull nearly 15,000 summer vegetable plants because he did not have enough water to keep them alive.

Like Jijoe, many farmers from the same area had to remove dying vegetable plants grown in summer owing to the very low levels of groundwater and rainfall, causing them considerable financial losses, as observed by Enab Baladi.

Jijoe told Enab Baladi that this loss in summer crops would affect both farmers and people of northern Syria because prices of vegetables would go up again.

This upsurge in summer vegetable prices has accompanied people’s increasing demand for summer vegetables and fruit. This is because people at this time of the year stock up on different kinds of locally grown crops, mostly eggplants, tomatoes, peppers, and cucumbers, for winter food storage, according to farmer Jijoe.

Winter food storage has become a financial burden for most Syrian families, in light of the low level of income and the rising prices of all food staples, mainly vegetables.

The Syrian government has also reduced its subsidies on the agriculture sector in the region.

Farmers, or the agricultural sector in general, face many obstacles— rising prices of fuel, agricultural fertilizers, pesticides, improved seeds and saplings— to meet the consumers’ needs in the area, according to Jijoe.

An increase in fuel prices is experienced in Aleppo countryside because the Turkish-backed Syrian National Army(SNA)has closed the Aoun al-Sadat crossing, linking its areas of control and the areas controlled by the Syrian Democratic Forces (SDF). This consequently prevents the entry of fuel supplies to northern Syria at a low price.

Several areas in the countryside of Aleppo are experiencing drought as the heavy use of groundwater has dried up many wells. All these portend greater future problems related to water scarcity for Syrians.

Bassam Hamsho, a geological engineer and a resident of Suran, attributed the water scarcity in the countryside of Aleppo, which caused the loss of crops, to the impermeable underground rocks in the area. These rocks, in fact, prevent rainwater from feeding the aquifer.

Over the last two years, a reduction in rainfall amounts has been observed in Aleppo countryside, according to Hamsho. Less than 20 percent of the average annual rainfall occurred during this year, which led to the drying up of a large number of wells in the region.

The city of al-Bab, east of Aleppo, was hit hard by a suffocating water crisis last June, which prompted the city’s residents and activists in the area to launch an “al-Bab is thirsty” campaign. The goal of the campaign was to shed light on the water crisis the city is suffering from.

The campaign participants called on the United Nations to assume its humanitarian responsibilities towards the population in northern Syria by pressuring the Syrian regime to re-pump water from the Ain al-Bayda station in the eastern countryside of Aleppo.

Since the Syrian regime retook control of the Ain al-Bayda water pumping station sited in the countryside of Manbij, east of Aleppo, in late 2016, the regime continues to prevent water supply to large areas in Aleppo countryside arbitrarily.