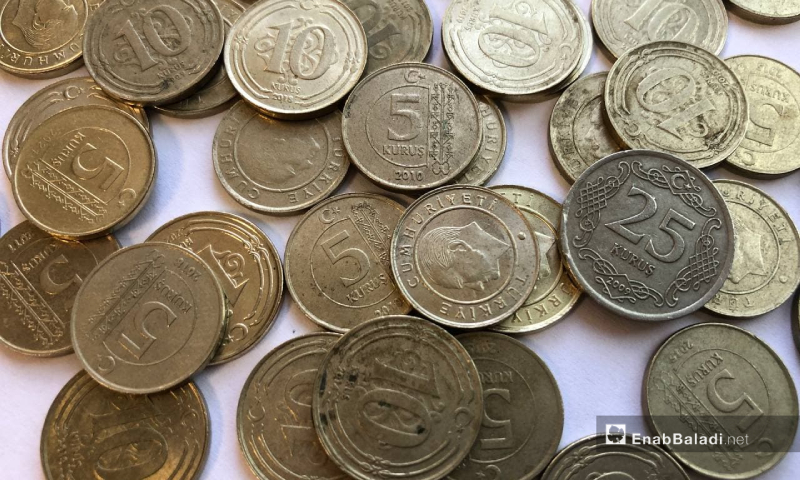 The non-use of Turkish kuruş coins (cents), including the 5, 10, 25, and 50 kuruş, is a primary cause negatively affecting northwestern Syria’s economy since the Syrian currency was replaced with the Turkish one in the region.

The low purchasing ability for some of the region’s residents and their lack of awareness of Kuruş value being new users of Turkish currency have divided opinions regarding the circulation of Turkish Kuruş in the northwestern Syrian region.

Al-Hoyan told Enab Baladi that the low use of Kuruş in the northwestern Syrian region causes commodities’ prices to increase 50 Kuruş or 1 Turkish lira at every price rise instead of just 5, 10, or 25 Kuruş.

While driving customers in his taxi, al-Hoyan does not give or demand Turkish Kuruş coins as part of delivery charges because they are rarely traded among people, as per his expression.

According to al-Hoyan, most of the region’s vendors avoid trading the 5, 10, or 25 Turkish Kuruş and use the 50 kuruş or 1 lira coins instead.

Al-Ahmed explained that the circulation of Turkish Kuruş would help the region’s residents spare some money.

The farmer added that goods exporters and merchants benefit the most from the lack of use of kuruş coins at the expense of consumers.

In a previous talk with Enab Baladi, merchants from northwestern Syrian regions said that since the Turkish currency was first introduced in their regions about a year ago, their commercial dealings felt more safe and flexible.

The use of the Turkish currency has also helped safeguard consumers’ money and achieve relative stability in prices, the merchants added.

On the other hand, some merchants expressed their dissatisfaction with the Turkish currency usage in northwestern Syria’s regions. They said that using the Turkish lira did not end the problem of rising prices; on the contrary, it caused further price increase due to its fluctuation against the US dollar. This, in turn, allowed merchants to manipulate prices of goods and products to an extent still less than what was happening when the Syrian pound was in use.

The embarrassment of dealing with Turkish kuruş coins

Mustafa Zaghloul, a restaurant owner in Idlib city, told Enab Baladi that dealing with the Turkish kuruş coins is both confusing and embarrassing and that he could not find a solution to this problem with his customers to this day.

Zaghloul added that most of his area’s residents do not want to deal with Kuruş coins, which puts merchants in front of two options, either to cancel the kuruş cost and sell products at lower prices or to transform the 5,10 and 25 kuruş coins to 50 kuruş or 1 Turkish lira, which customers prefer as they do not comprehend the logic of kuruş usage.

According to Zaghloul, the real problem is that the region’s residents are not convinced in the use of Turkish kuruş coins and do not know their value, adding that if they start circulating them more frequently, the markets would be in a far better situation.

(SSG), Mohammed Daboul, confirmed the availability of kuruş coins in northwestern Syria since the Turkish currency was first adopted there, noting that bringing additional quantities from Turkey is also not difficult.

The SSG’s official added that the amount of kuruş coins available at the region’s money exchange shops is “good,” explaining that the main reason behind their limited use is people’s ignorance of their financial worth. They underestimate them and think of them as the Syrian piastres. In addition, the region’s merchants are exploiting the situation by replacing subunit coins with the Turkish lira.

The Turkish kuruş utilization rate has improved since the beginning of the current year, nearly six months after the Turkish currency was first adopted in the region, Daboul said.

He added that the improvement is attributed to some merchants’ price competition and the increase of official oversight by Consumer Protection Teams on pricing goods with Turkish lira’s subdivisions.

A study prepared by Syrian economic researcher Khaled Turkawi in June 2020 entitled “Using the Turkish Lira in the Syrian North: Course, Causes and Impact” for the Jusoor Center for Studies predicted that the northwestern Syrian population would face difficulties using the Turkish currency, particularly in relation to denominations.

The study mentioned that the circulation of Turkish kuruş coins means that the region will need large quantities of coins. In addition, their use will make price equivalence between the Syrian and Turkish currencies very problematic to consumers.

The Syrian pound was substituted with the Turkish lira in northwestern Syria after reaching record low levels at 3500 against the US dollar in June 2020. Back then, many Syrians demanded the substitution to be temporary, pending a political solution in Syria.