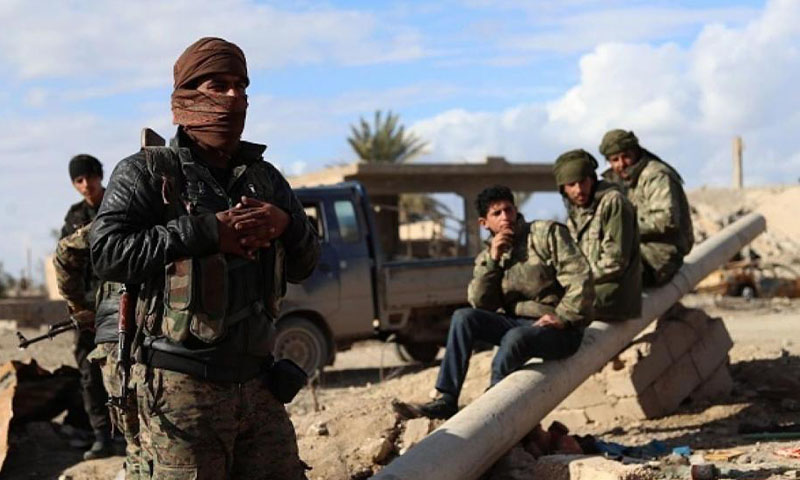 Forty-year-old Hamdan al-Abdul Aziz has tried in vain to unveil the identity of those who robbed him under gunpoint while he was using his car. He was unable to claim back his right or bring perpetrators accountable.

Al-Abdul Aziz, a foodstuff trader, became a victim of a robbery on a makeshift roadblock set by unidentified gunmen carrying individual weapons on the highway to the al-Baghouz town in the eastern countryside of Deir Ezzor. The robbers stole a sum of money from al-Abdul Aziz’s car and threatened him not to make any sound or show resistance.

The security rampant in Deir Ezzor in northeastern Syria coincided with many assault incidents on civilians by unknown people holding arms illegally and without control, threatening the region’s community security.

Weapons proliferation in Deir Ezzor is rampant and adversely affecting the already fragile security situation in the region, where the Syrian Democratic Forces (SDF) backed by the US-led International Coalition Forces (ICF) share military control with the Syrian regime supported by Iranian militias. The two forces’ areas of influence are separated by the Euphrates River.

The SDF controls the eastern countryside of Deir Ezzor, while the regime forces control the western Euphrates River.

According to al-Abdul Aziz, the SDF’s inaction towards the widespread use of unlicensed weapons in its areas is one reason worsening this phenomenon. SDF fighters were said to carry weapons even when they are in civilian clothes, thus contributing to the security chaos.

The impacts of arms proliferation are not only limited to money loss like what happened with al-Abdul Aziz, as many people are losing their loved ones due to this dangerous phenomenon.

Thirty-year-old Ali al-Jloud had one of his children killed during a wedding celebration in al-Basirah town in the eastern countryside of Deir Ezzor. His child was hit by a stray bullet, following an old custom in Syria, in which happy celebrations such as weddings are marked by firing shots as a symbol of festivity and a way of attributing value to ordinary events.

To al-Jloud, firing in celebrations has become more than just a custom and has increased considerably, putting lives at stake due to “ignorance of consequences.”

Barriers preventing stoppage of unlicensed use of weapons in SDF areas

An SDF commander stated to Enab Baladi on the condition of anonymity “Currently, it is not within the hands of the SDF to combat or limit the proliferation of arms for a number of reasons.”

According to him, the most important of these reasons is the Islamic State’s (IS) “active presence” in rural Deir Ezzor.

The SDF commander added that the SDF is also “affected by this chaos; however, the locals are using the region’s adverse security conditions as an excuse to carry or possess weapons.”

He accused the Syrian regime and Iran of trying to thwart any efforts by the SDF aiming to control the security of the areas under its control by “facilitating IS movement on the opposite bank of the Euphrates River that is controlled by the regime.”

In early June, dignitaries from Deir Ezzor’s eastern countryside’s clans demanded the Autonomous Administration of North and East Syria (AANES) affiliated forces, the Internal Security Forces (ISF), also known as Asayesh, to pass strict laws to curb the phenomenon of unauthorized arms-bearing among civilians, which has been threatening their community’s peace.

Syrian legislative decree No. 51 of 2001 promulgated the new small weapons permits law and revoked all permits for military rifles and shotguns and their ammunition without prior authorization. The decree also limited the number of weapons per licensed owner to a one-shot revolver and two hunting rifles.

The SDF launches military operations and security campaigns on a recurrent basis, claiming to search for those wanted for IS membership. In Its campaigns, the SDF seizes whatever weapons and ammunition it finds.

However, these security operations are falling short in eradicating the problem of arms proliferation, especially in the absence of a strict legal deterrence in the SDF areas to control the use of weapons by civilians in Deir Ezzor.