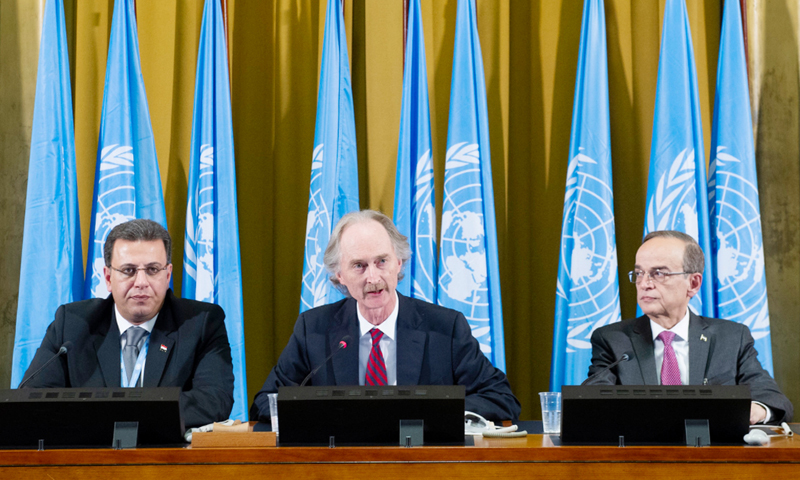 Preparations for a sixth round of the Syrian Constitutional Committee (SCC) meetings are underway, amid talks of an anticipated change in its course of action after lots of procrastination in previous sessions.

On 31 March, Russian Foreign Minister Sergey Lavrov announced an upcoming one-to-one meeting of the co-chairs of the SCC’s two key delegations, the Syrian regime and the opposition.

Lavrov hoped that the next session of the SCC’s talks would break new ground compared to previous rounds.

It is the co-chairs’ duty to meet

The co-chair of the Syrian opposition delegation, Hadi al-Bahra, stated to Enab Baladi that the upcoming meeting between the co-chairs of the SCC, which the UN Special Envoy for Syria Geir Pedersen welcomed, is part of their duties and is clearly stated in the SCC’s Terms of Reference and Core Rules of Procedure, agreed upon by all involved Syrian parties when the SCC was formed under the UN auspices.

This is not the first time a proposal is made to bring the SCC co-chairs together in an unmediated meeting, and the failure to hold such a meeting before hampered the committee’s work.

The party that was obstructing the meeting bears the responsibility for hindering the SCC works, al-Bahra said, in an indication to the regime’s delegation.

According to al-Bahra, “What is more important, [then the meeting], is all concerned parties’ willingness to overcome obstacles and accomplish tasks entrusted to the co-chairs of the SCC. They are requested to facilitate and propose working plans and agendas to address all issues, without making these issues dependent on each other.”

Ahmad Israwi, a representative of the National Coordination Committee of the SCC and the Secretary-General of the Arab Democratic Socialist Union Party in Syria, stated to Enab Baladi that the Syrian government’s delegation acceptance of a direct meeting between the co-chairs of the SSC is a “progress.”

Al-Bahra told Enab Baladi that it is necessary to agree on a productive approach before setting a date for the sixth round to ensure concrete results.

He added, “We have called for stepping up the pace of work and keeping it in progress to fulfill the SCC’s mission and to implement Security Council Resolution No. 2254 regarding the constitutional process. The fourth article of the UN resolution sets a timetable for the political transition in Syria through drafting a new constitution.”

The Russian Foreign Minister highlighted Moscow’s efforts to hold the sixth round of the SCC meetings before Ramadan, to start on 13 April.

While Israwi pointed out that no agreement has been reached so far on the sixth round’s exact date, which is contrary to the conditions set by the regime’s delegation to schedule the meeting before Ramadan.

Israwi added that Ramadan should not be used as an excuse to postpone the meeting’s date if the involved Syrian parties were serious about completing constitution drafting.

On 15 March, during a briefing to the United Nations Security Council, Pedersen said that a sixth session of the small drafting body of the Constitutional Committee needs to be carefully prepared, pointing out the committee’s inability to resolve the conflict in Syria alone.

The spokesman for the opposition-led Syrian Negotiation Commission (SNC), Yahya al-Aridi, told Enab Baladi in a previous talk that a sixth-round would be held only with international consensus to achieve positive results. He added, “There is a belief in opposition circles saying that if there are no advance guarantees of a certain kind, then the upcoming round is unnecessary.”

Pedersen welcomed the upcoming direct meeting between the co-chairs of the Syrian regime and opposition delegations, the Russian Foreign Minister announced.

Al-Bahra, on the other hand, said that Pedersen had made efforts to reach an agreement on the working methodology of the SCC and its negotiations to produce outputs consistent with its clearly defined mandate.

Al-Bahra added, “We put forward proposals for the SCC’s working methodology before and during the fifth round of its meetings. The UN Special Envoy also made a proposal that we accepted as representatives of the SNC; unfortunately, the SCC members did not reach a consensus.”

Pedersen continued his efforts to reach an agreement regarding the SCC’s working methodology after the end of the fifth session and is still working to achieve consensus between the SCC parties before the sixth round, al-Bahra said.

After five futile sessions, would the sixth be feasible?

The SSC Rules of Procedure states a rapid and sustained commitment to the committee’s agenda leading to concrete results. Clear-cut mechanisms should be put in place to ensure the completion of the SSC’s mandate as soon as possible, al-Bahra said.

He added, “It is our duty, and we cannot go further without some concrete achievements at every session of the committee’s meetings. The Syrian people suffer a grave tragedy and ongoing hardship, which requires greater efforts by all concerned parties. Any disruption to the committee’s work is unacceptable and is considered a crime against all Syrians.”

For his part, Israwi has not seen to date any “positive signs” that could be expected from the next round. He linked the success of the upcoming round’s outputs with “the SNC delegation and the Syrian regime’s delegation, which was uncooperative in previous rounds. The civil society delegation also has a role in the success of the sixth session, especially as its members’ views are divided between the two key delegations of the SCC.”

“Session five of the Constitutional Committee was a missed opportunity and a disappointment,” Pedersen said in a briefing to the Security Council on the fifth round of the SCC meetings, which ended on 29 January 2021. He noted that there is “no future work plan for Syria yet.”

“Work continued as in previous rounds, and the approach was not feasible. We cannot advance with the committee’s work without changing the work plan,” Pederson said.

Since the fifth round of the SCC’s talks failed to reach a joint statement, Pedersen made recommendations in his briefing, held on 9 of last February, on the importance of changing the approaches adopted by the Constitutional Committee, as well as bridging the rift manifested in international divisions hindering a resolution to the Syrian conflict.

On a visit to Damascus on 21 last February, Pedersen said that his discussions with Syrian regime officials in Damascus would focus on implementing Security Council Resolution 2254, noting that there were many issues he hoped to talk about, primarily the difficult living situations of the Syrian people.

In this visit, Pedersen did not talk about the Constitutional Committee, especially since he had previously alluded to the responsibility of the regime’s delegation for “disrupting” the fifth round meetings in Geneva.

The Syrian Constitutional Committee consists of three delegations (the opposition, the Syrian regime, and the civil society). Its key mission is to draft a new constitution for Syria under United Nations Resolution 2254, which provides for forming a transitional governing body and organizing free and fair elections.