The dangerous face of rights: Should civilians in Idlib be allowed bearing arms? 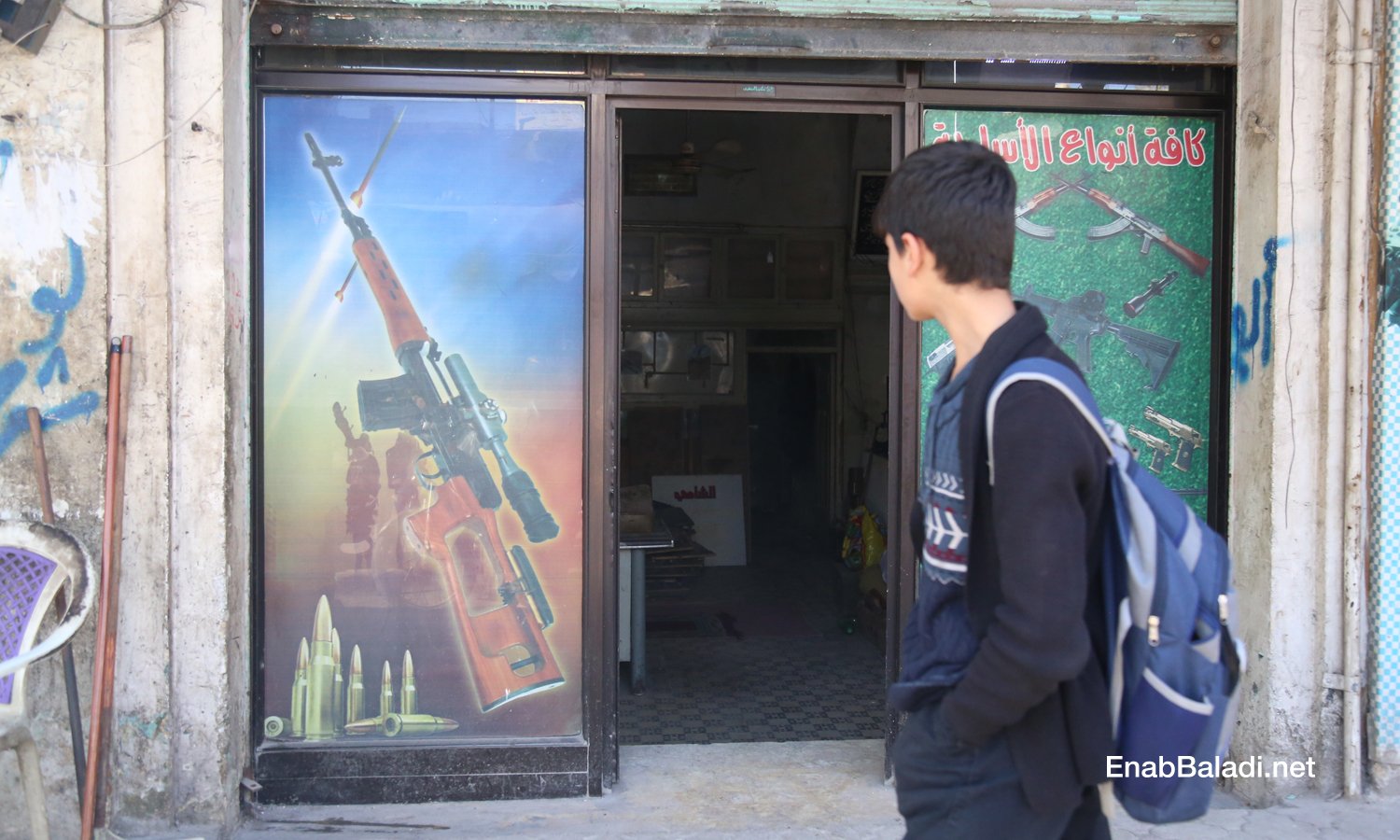 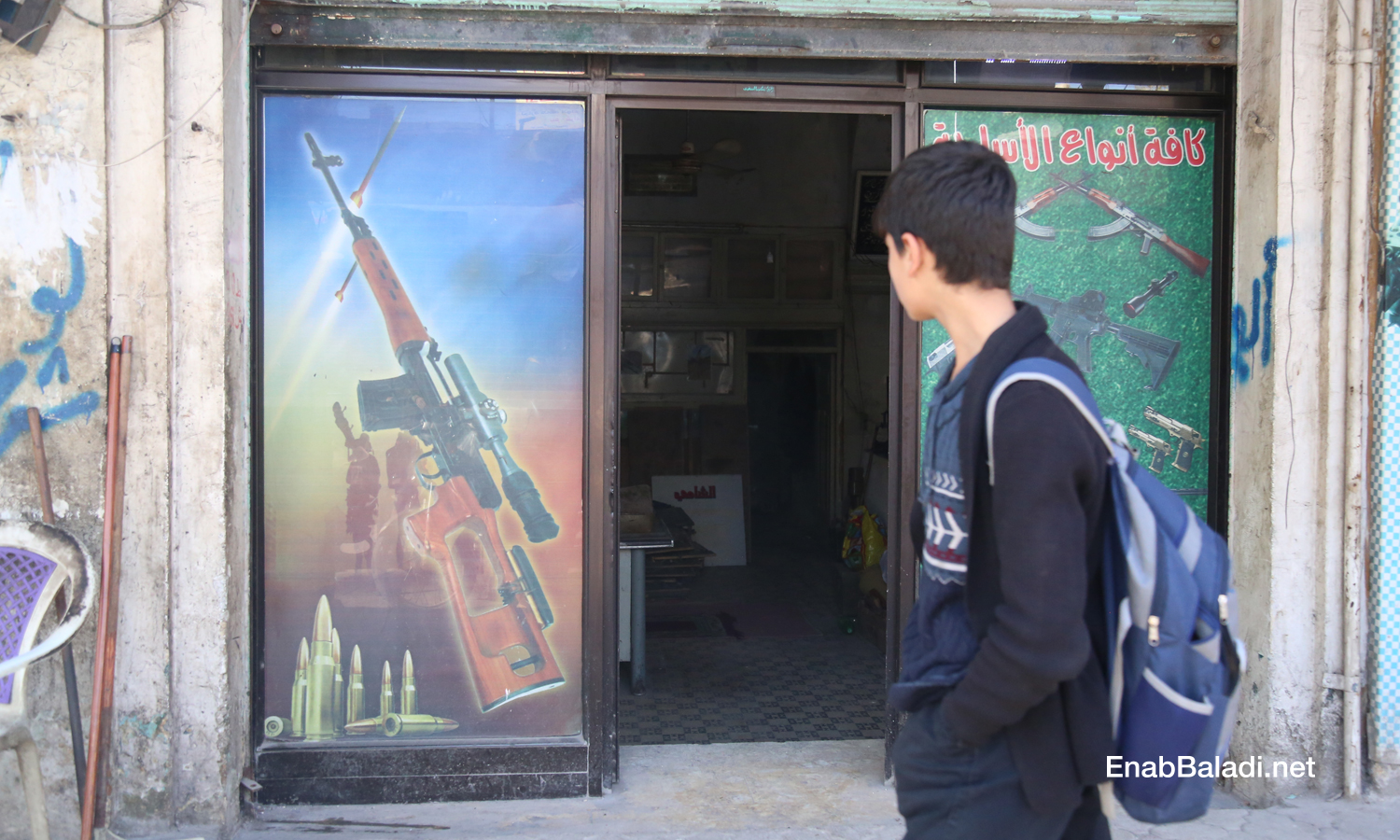 “Oh! I hope Amal dies before I do,” Ibtisam Ali Pasha said, referring to her five-year-old daughter, who was hit by a stray bullet.

Ibtisam recounted to Enab Baladi the terrifying incident that occurred two years ago and left her daughter unable to walk.

She said that less than a minute after hearing the sounds of gunshots coming from a near wedding party, a stray bullet hit my child Amal in the neck while playing in the backyard of our home.

Within seconds, Amal fell to the ground, motionless. The mother tried to get her daughter to stand up, but she could not.

The life of the whole family changed, as well as the mother’s plans for her eldest daughter’s future. The idea of leaving her without adequate care has become more frightening than death itself.

When I hear the sound of the stray bullets—a very “familiar” sound in the rebel-held province of Idlib, in northwestern Syria—“I rush to take my children home. At this moment, Amal starts to have a panic attack; she cries and beats herself up, saying, ‘mum, please, there is a horrifying wedding party’,” Ibtisam said.

The family did not resort to the courts or try to hold the shooters accountable.

Ibtisam believes that wandering through the courts’ corridors will only bring them suffering. She said that they live in an area controlled by a government that issued laws with little impact on the ground.

The de facto Salvation Government (SG) dominates the civil administration’s sector in Idlib, the last bastion of the opposition factions, which is in a direct war with the Syrian regime and its allied forces and controlled by Hayat Tahrir al-Sham (HTS).

The SG issues laws that can be penetrated when necessary.

Weapons can be seen in civilians’ hands because there is a war going on in the region, the interior minister of the Idlib-based SG, Ahmed Latouf, told Enab Baladi. He indicated that there are benefits and risks of weapons’ possession.

One of the risks of carrying a gun is that weapons can result in criminal offenses. However, the number of weapons that people keep is “insignificant”, according to Latouf.

As for the benefits of the personal use of weapons, he said that people carry weapons for safety concerns, “to protect ourselves, our family members, friends, and money.”

Latouf highlighted that seeing firearms in the hands of civilians is not new. Actually, it is common in many countries around the world, but only certain groups can carry weapons. As for the unacceptable use of a gun, such as indiscriminate firing in weddings and holiday celebrations, Latouf said that “this phenomenon was almost eliminated in the region,” thanks to the administrative procedures.

The SG-linked ministry of interior issued a circular on 12 May 2018, noting that celebratory gunfire is illegal and dangerous. Still, no one complied, and the decision was not effectively implemented. The shooting incidents are still widespread, mainly in the cities and towns of Idlib province.

Enab Baladi’s correspondents in Idlib province monitored two random shootings in the city of Sarmada on the Syrian-Turkish borders on 22 October 2020. The first took place in a wedding ceremony; the second occurred during a clash between unknown persons.

The sale of weapons “is not carried out randomly,” Abu Ahmed al-Hamwi, an arms shop owner in the city of Idlib, told Enab Baladi.

Abu Ahmed al-Hamwi, who declined to mention his real name, said that the firearms dealers maintain gun purchase and sale records. Besides, they refuse to sell weapons to children and teens. There are also surveillance cameras in the shops, where all gun purchases and sales can be seen and tracked at any time.

Al-Hamwi confirmed that individual weapons such as “Russian small arms, pistols and ammunition” are frequently requested. He believes that there should be no weapon shops in the civilian market; it is something “unacceptable.” Weapon shops should be allocated specific locations.

Al-Hamwi pointed out that the SG’s decision is “unfair” against the owners of gun shops. This decision affects the livelihoods of many, whether firearms shop owners and dealers or those who they support financially. He believes that the best solution is to prevent the presence of explosive materials in the market.

Enab Baladi surveyed the opinions of some residents in the city of Idlib about the possession of weapons by civilians.

Respondents to the survey unanimously agreed that the possession of weapons by some civilians has had only a few advantages, given the “recklessness” of some arms holders and the lack of awareness within the community.

Muawiyah Agha said that carrying weapons makes people feel safer; they need to use a gun for self-defense against criminals. Nevertheless, its spread among civilians causes many problems.

For example, “If a person quarrels with another, he immediately uses his weapon to threaten or kill the other guy.”

Agha believes that the solution is that there should be deterrent factors (ethical or religious or legal) that prevent crimes, community awareness, and control measures.

Besides, children should not be allowed to carry weapons. Agha called on local authorities and families to raise awareness about the dangers of weapon misuse. He stressed that the phenomenon ends when the regime is “overthrown” and the war ends.

For his part, Sadiq Shahoud, a resident of Idlib, said that the proliferation of weapons in the hands of civilians is “dangerous” and has been a source of serious concerns in recent years, especially in the camps. He said that the use of weapons by irresponsible people is hazardous.

There are no accurate statistics on the number of people affected by indiscriminate bullets fired by civilians or military factions. However, Enab Baladi monitored horrifying incidents in some videos published on social media. The videos showed fights in different areas of Idlib, which resulted in deaths and injuries of civilian people.

Civilian casualties occurred as a result of a quarrel in the al-Kuwaity camp in the northern countryside of Idlib, which included the use of a grenade.

Then, random bullets were fired in the city of Salqin as a result of a quarrel between residents of the towns of Maarat al-Numan and Salqin.

On 25 January, the SG, which controls the civil administration in Idlib, issued a decision to shut down all weapons shops in “the liberated areas” as well as a moratorium suspending such activities.

On the due date, granted by the SG for owners to close their arms stores, Al-Sham news agency, which is affiliated with the SG, published photos showing police’s deployment in different parts of Idlib to ensure that weapon shops are closed and the decision is implemented.

A gun store owner, who spoke on the condition of anonymity with Enab Baladi, said that “The government did not implement the decision to close the arms shops. In the upcoming days, the SG will likely reach a new understanding with gun shop owners, allowing them to keep their shops open only under certain conditions.”

On 27 August 2018, the SG imposed firearm licenses on shops that sell and store weapons after an ammunition depot exploded in Sarmada, killing 67 civilians.

The interior minister of the Idlib-based SG, Ahmed Latouf, said that the decision to close the weapons shops was made because the firearms shops are widely spread in populated areas. Thus, these shops have become a major source of insecurity and instability due to the explosions that may occur inside them.

Arms trade flourished in Idlib over the past years, particularly after it became under the control of the opposition factions in 2015, and because arms were highly sold on the black market.