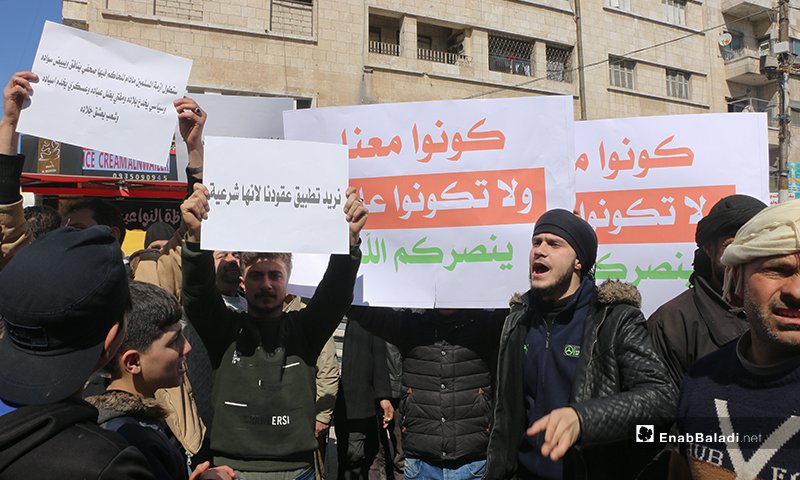 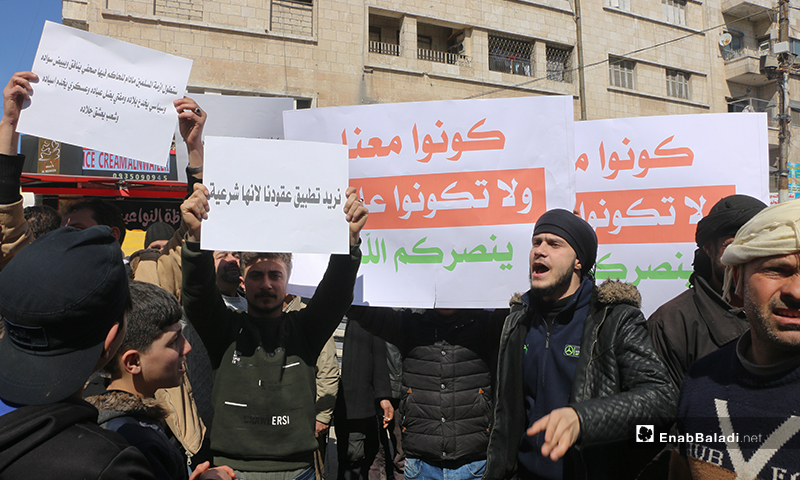 A protest was organized in Idlib city center on 6 March against a decision issued by the Syrian Salvation Government (SSG), the de facto authority in Idlib and part of Aleppo western countryside. The decision led to a rental increase for shops belonging to the Directorate of Islamic Endowments (Awqaf) of Idlib governorate, northwestern Syria.

The protesters raised signs demanding compliance with their original contract terms and not to override them because they are “legal.”

Amar Daboul, a tenant of a waqf shop and one of the protesters, told Enab Baladi that the original contract permits the Awqaf to raise shops’ rents between 10% and 35% every three years.

The shops’ tenants paid the Awqaf commercial leases assignment fees or financial donations, which transferred the shops’ ownership right to them, Daboul said.

Daboul has paid his shop’s leasehold assignment cost since 1990. He said that if the SSG wants to restore the shops’ ownership, it can simply do that, but only after returning the amount paid as an assignment fee (nine dunams of land and 8,000 US dollars, currently equivalent to 2.7 kilograms of gold).

Daboul’s shop is located on the northern side of al-Aqrai Mosque in Idlib city, in the center of the Bazaar Square. The Awqaf raised his shop’s rent from 20 USD per month to 100 USD.

Last February, the occupants were warned that the rents of their Awqaf-owned shops would be increased. They refused the decision, which they described as unfair as it fails to take into account the financial income earned. They also criticized the Rent Assessment Committee, according to previous interviews Enab Baladi conducted with tenants.

Last month, some commercial waqf renters told Enab Baladi that they had held a meeting and will bring the rental problem to the attention of the head of Idlib’s City Council, Khairuddin Issa, who in turn would report the issue to the Awqaf Ministry.

In case the ministry did not provide a mutually acceptable solution to both parties, the objecting tenants will go on strike and stop paying their rents. 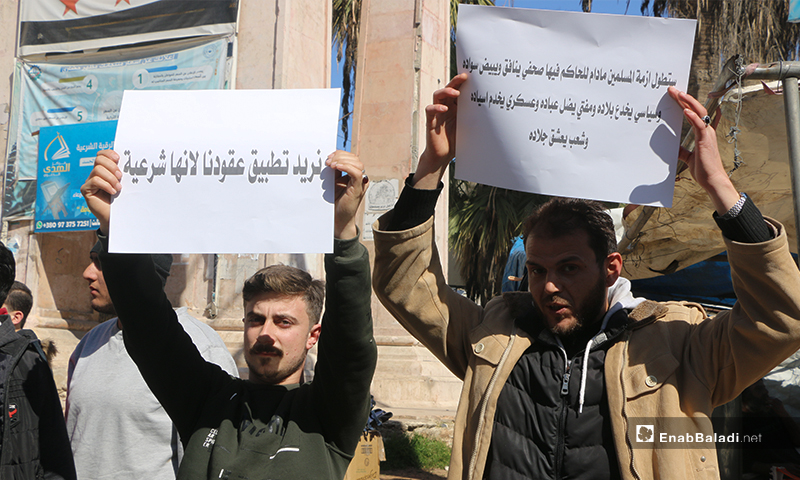 The Deputy Minister of Awqaf in the SSG and Director of Idlib’s Awqaf, Iyad al-Masri, stated previously to Enab Baladi that out of 390 real estates owned by Idlib Awqaf Directorate, the ministry raised the rents of only 70.

Al-Masri added that the rents were raised within the scope of comparable rents of properties with similar specifications. He noted that shop tenants whose rents were increased were originally paying low rents because they previously made financial donations to the regime’s government.

“These low rents are unfair. They are dedicated to waqf properties given by donors in the name of God for religious and charitable purposes. The same rents cover the wages of mosque preachers and imams,” al-Masri said.

Al-Masri noted the difference in rents between a shop located in the center of the market area, whose tenant pays only 40 USD monthly because it is a waqf property, and another shop of equivalent specifications whose rent is 350 USD.

The Awqaf doubled the cheap rents of shops other than the 70 ones whose rents were raised before, to 60 USD per year after they were around 30 USD, al-Masri said.

These shops’ cheap rents were raised far less than other rents because their buildings are old or located in side streets, al-Masri said.

Some shop tenants previously interviewed by Enab Baladi complained about the Awqaf Ministry’s committee’s rent assessment mechanism and the fact that they were not informed of the rental increase in advance. Rumors were circulated in early February that the rents would rise between 20 USD and 50 USD monthly, while other rents would reach 200 USD after the increase depending on the property’s location.

They said the problem is with the Assessment Committee determining the rental costs depending on the rents of other shops not owned by the Awqaf, whose owners pay 300 or 400 USD per month. The committee overlooks the fact that the same shop tenants are closing their businesses because of high rents and prices.

The committee did not consult the shop occupants before raising their rents; therefore, Marwan Kawasrah called on the Awqaf Ministry to send someone to his shop to assess its situation.

Responding to a question about the mechanism adopted by the Awqaf Ministry to evaluate the shops’ rents, the Director of Idlib’s Awqaf, al-Masri, said that the ministry estimates the rents of waqf properties on an annual or seasonal basis on reasonable standards whether they were commercial shops or agricultural lands.

“This measure is known to all shop tenants. At the beginning of each year, we evaluate the situation of the properties by a committee, including a real estate expert and a representative from the Awqaf Directorate,” al-Masri said.

The estimated rents are then announced publicly, with objectors being allowed to submit their objections to the Awqaf Ministry’s Appeals Committee.

The Appeals Committee heads to the real estate market with a real estate expert or two. It matches the estimated rents of waqf real estates with that of shops of similar specifications. Then, the committee files a report about to which extent the estimated prices were well decided. After the committee’s report, the rents’ final value is determined.

Waqf properties have a special status. They are not state-owned properties, and governments cannot dispose of them as they wish, nor are they owned by individuals. The majority of waqf properties are the private property of individuals who donated them to the Awqaf so that their revenues are dedicated to charity and to help those in need.