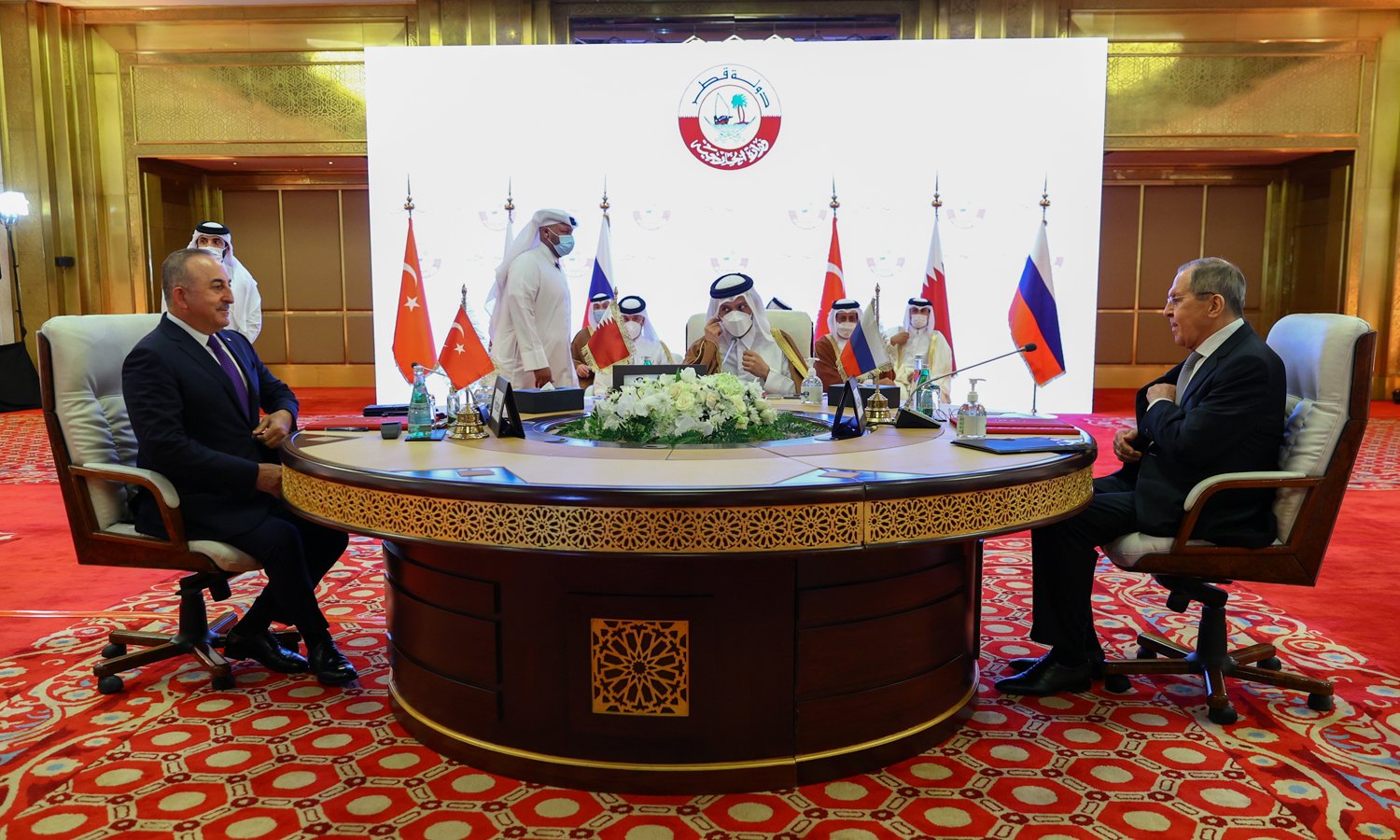 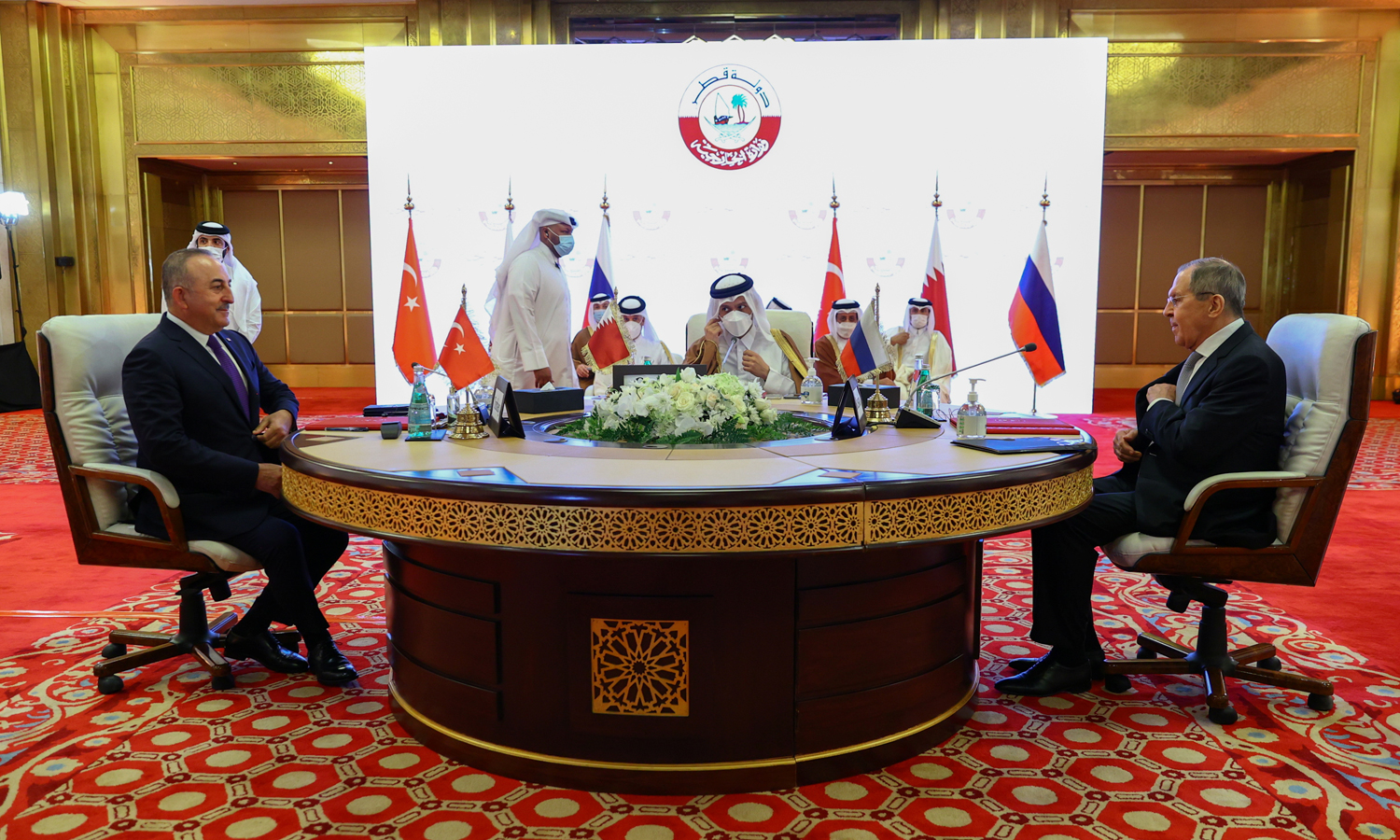 The Syria issue dominated the discussions of Russia’s Minister of Foreign Affairs Sergi Lavrov during his diplomatic visit to the Gulf region, which included the UAE, Saudi Arabia, and Qatar.

Lavrov’s last stop was the most prominent, as he concluded his tour in Qatar on 11 March. Lavrov held a meeting with Turkey’s Foreign Minister Mevlut Cavusoglu and Qatar’s Minister of Foreign Affairs Mohammed bin Abdulrahman al-Thani in Qatar’s capital, Doha. They discussed possible strategies to support the Syrian constitutional committee as well as the Syrian people in the humanitarian field.

Russia, Turkey, and Qatar announced that they would continue their talks in Turkey, and then in Moscow. It is worth mentioning that these recent talks were preceded by meetings between the three countries’ special envoys over the past months. They laid the groundwork for dialogue on the Syrian file.

The Qatari Foreign Minister referred to a meeting between the three special envoys of Qatar, Turkey, and Russia, in order to find ways to deliver humanitarian aid to the Syrian people, discuss a political settlement, and support each party in the political process and the constitutional committee.

Tehran’s absence from the meeting raised multiple questions about its future role in Syria and Moscow’s goals from Doha’s tripartite meeting. Some political analysts consider this meeting as a new process added to the Astana and Geneva diplomatic processes.

However, Lavrov denied that the tripartite meeting is an alternative to the Astana process, which includes Turkey, Russia, and Iran as guarantors of the Syrian regime and the opposition.

Will Russia use Arab money to achieve its goals? Where is Iran?

Maan Talaa, a researcher at the Omran Center for Strategic Studies, said that Iran is economically exhausted. That is why it will not serve Moscow in this path forward (i.e., economically), unlike the Arab countries.

“Therefore, the main goal of the Doha talks is to try to find ways for the Syrian regime to emerge from its economic crisis through the Arab gate”

Maan Talaa told Enab Baladi that Qatar was chosen as the starting point for “Russian-Qatari-Turkish” talks because it has balanced relations with Iran.

Qatar reassured Iran through diplomatic messages that it is “not in any way absent from this file.”

Also, Moscow needs a path forward in which the Iranians do not play a role, according to Maan Talaa. Iran’s military intervention led to a security knot, which formed a permanent point of contention between Russians and the US on the one hand, and between Russians and Israel on the other.

The foreign ministers of Saudi Arabia and Qatar did not mention the lifting of sanctions on Syria. However, the Emirati Foreign Minister, Abdullah bin Zayed, declared in the presence of his Russian counterpart that the “biggest challenge facing coordination and joint work with Syria today is the Caesar Act [the United States legislation that sanctions the Syrian government and its supporters].”

He added, “There must be areas that open the door to joint work with Syria for all of us.”

Bin Zayed said that “to keep the Caesar Act as it is today makes this path very difficult, not only for us as a nation, but also for the private sector.”

He said these sanctions are an issue that “should be part of the dialogue we address clearly with our friends in the US.”

The US State Department responded to the Emirati foreign minister’s statements regarding the effects of the US Caesar Act on Syrians’ lives; it stated that this law has nothing to do with the humanitarian crisis in Syria and blamed the regime of Syrian President Bashar Assad for that.

A US State Department spokesperson responded via Alhurra, a US-based public Arabic-language satellite TV channel, to Bin Zayed’s statement that “stability in Syria and the wider region can only be achieved through a political process that represents the will of all Syrians.” The US is committed to working with allies, partners, and the United Nations (UN) to ensure that the political solution is at hand.

“The severe humanitarian crisis in Syria is a direct result of the Assad regime’s obstruction of life-saving aid, systemic corruption, and economic mismanagement,” the US State Department spokesperson added.

Researcher Maan Talaa underscored that Russia needs to effectively play a political role, starting from the Geneva talks, up to the Vienna-1 and Vienna-2 conferences and resolution 2254.

Resolution 2254 redefined the Geneva Declaration based on the military data on the ground after the fall of the eastern neighborhoods of Aleppo at the end of 2016. Russia must thereby balance the interests of both Russia and Syria.

Russia can impose its political interests through Geneva talks, while Astana is a “security interaction path” that would reduce the Russian intervention’s political and military costs. Therefore, Astana is a platform from which Moscow needs to coordinate the scene inside Syria, especially in the eastern Euphrates region, with the other guarantors—Turkey or Iran.

Russia also needs Astana talks as long as there is a military area outside the Syrian regime’s control.

The third possible process formed in Doha is “economic interaction.”

The three processes play various roles with one ultimate purpose. They seek to prove the legitimacy of the head of the regime, Bashar al-Assad, to both the Syrian people and the international community. According to Maan Talaa, these tracks together are used to overcome post-conflict challenges, especially economic and political ones. The result is “Moscow’s success, as itself views it, in transporting a triumphant model of its interventions in the Middle East through Syria.”

The impetus to debates on Syria

At the end of September 2015, Russia launched a military intervention in Syria which tipped the military balance in favor of the Syrian regime. The regime furthered its advantage after it retook control over the city of Aleppo in December 2016 via the Astana process which began in January 2017.

The Russian Foreign Ministry’s efforts grew in harmony with the “zero solution” to restore the legitimacy of al-Assad.

Initially, the Russians tried to promote Syrian refugees’ return to their war-torn country, launching a program to facilitate their safe return. However, this program failed. The Caesar Act disrupted these attempts to restore al-Assad’s legitimacy in exchange for refugees’ return.

According to Maan Talaa, Russia also aims to take the pulse of most of the actors in this context and to find out if there are alternative propositions, as evidenced by Lavrov’s recent diplomatic visit. However, this “is nothing more than a tactic for achieving the main goal, which is to create this path in order to find a way out from the reality imposed by the Caesar law on Arab countries that were trying to return, in some way, to legalize or to re-establish diplomatic relations with the Syrian regime.”

In order to bring the Syrian regime out of its economic crisis via the Arab Gate, the Russian Foreign Ministry needs to use specific tactics and strategies. However, the existing Russian tactics and strategies “will not be of use, because the Russians still believe that al-Assad should remain in power. Therefore, they are doing their best to promote the al-Assad regime as the only legitimate authority in Syria.”

The Arab countries’ political decisions regarding the Syrian file are still linked with American policies. Arab countries still support the Syrian constitutional committee and adopt the Geneva statement and resolution 2254 as the basis for a political solution to address the Syrian crisis.

Arab countries are not ready until now to engage in any process without US consent, according to Maan Talaa.

Furthermore, he ruled out a possible change in the position of the Arab countries or a smooth transition in the near term by restoring momentum to these roles in the Syrian file;  Arab countries currently can only play secondary roles.

The final declaration of the Gulf Cooperation Council (GCC) Summit, issued on 5 January, confirmed the adoption of the principles of Geneva 1 and Security Council Resolution No. 2254 for the political solution process in Syria. The declaration also condemned the Iranian presence and intervention in Syria, calling for the exit of all Iranian forces and militias that it recruited in addition to Lebanon’s militant Hezbollah group, according to Asharq Al-Awsat newspaper.

The Gulf countries signed the al-Ula declaration—named after the Saudi city where the summit was held— ending the boycott between Saudi Arabia, Egypt, the UAE, and Bahrain on the one hand, and Qatar on the other hand. This came at the time when Joe Biden assumed office in Washington, bringing the White House back to the domain of Democrats.

The summit took place in the presence of the Emir of Qatar, Tamim bin Hamad, in a visit that was the first of its kind to Riyadh since Saudi Arabia, Egypt, Bahrain, and the UAE imposed a blockade on Qatar on 5 June 2017.

Comments by the UAE, Qatar, and Saudi Arabia during Lavrov’s visit

“Syria’s return to the Arab fold is essential and has nothing to do with who wants or who does not want it. It is a matter of public interest and the interests of Syria and the region.”

It is only possible to work on the return of Syria to its regional surroundings and to discuss the important roles in which Syria returns to the Arab League, despite the presence of “disturbances between the parties.”

“The Syrian settlement requires a comprehensive political solution and harmony between the Syrian regime and the opposition. Syria deserves a return to the Arab embrace.”

There are still reasons for suspending Syria’s membership in the Arab League, and “the Syrian issue is in the minds and hearts of the Qatari people.”

All opportunities for cooperation between countries must be exploited, and we will complement international efforts to reach a settlement for the Syrian crisis.