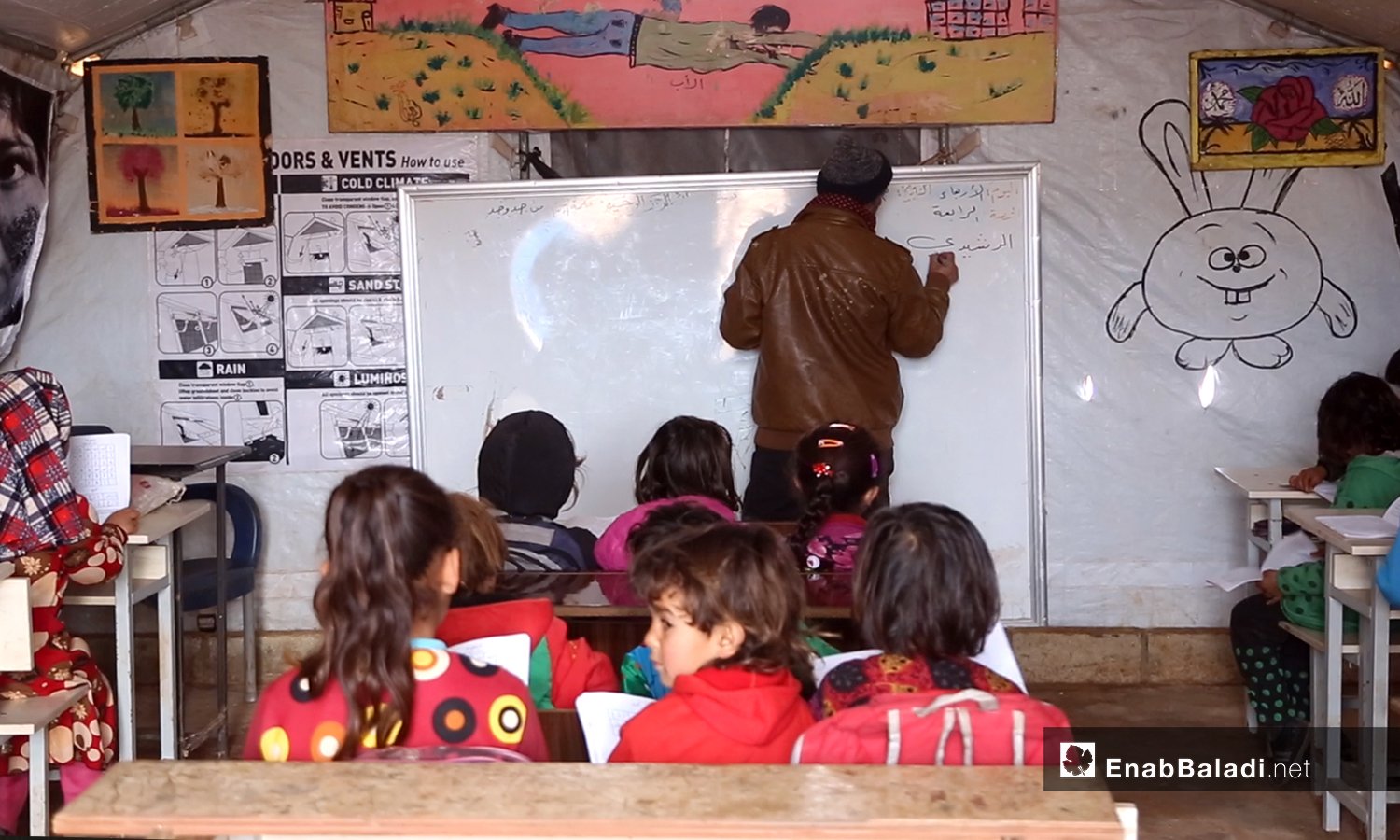 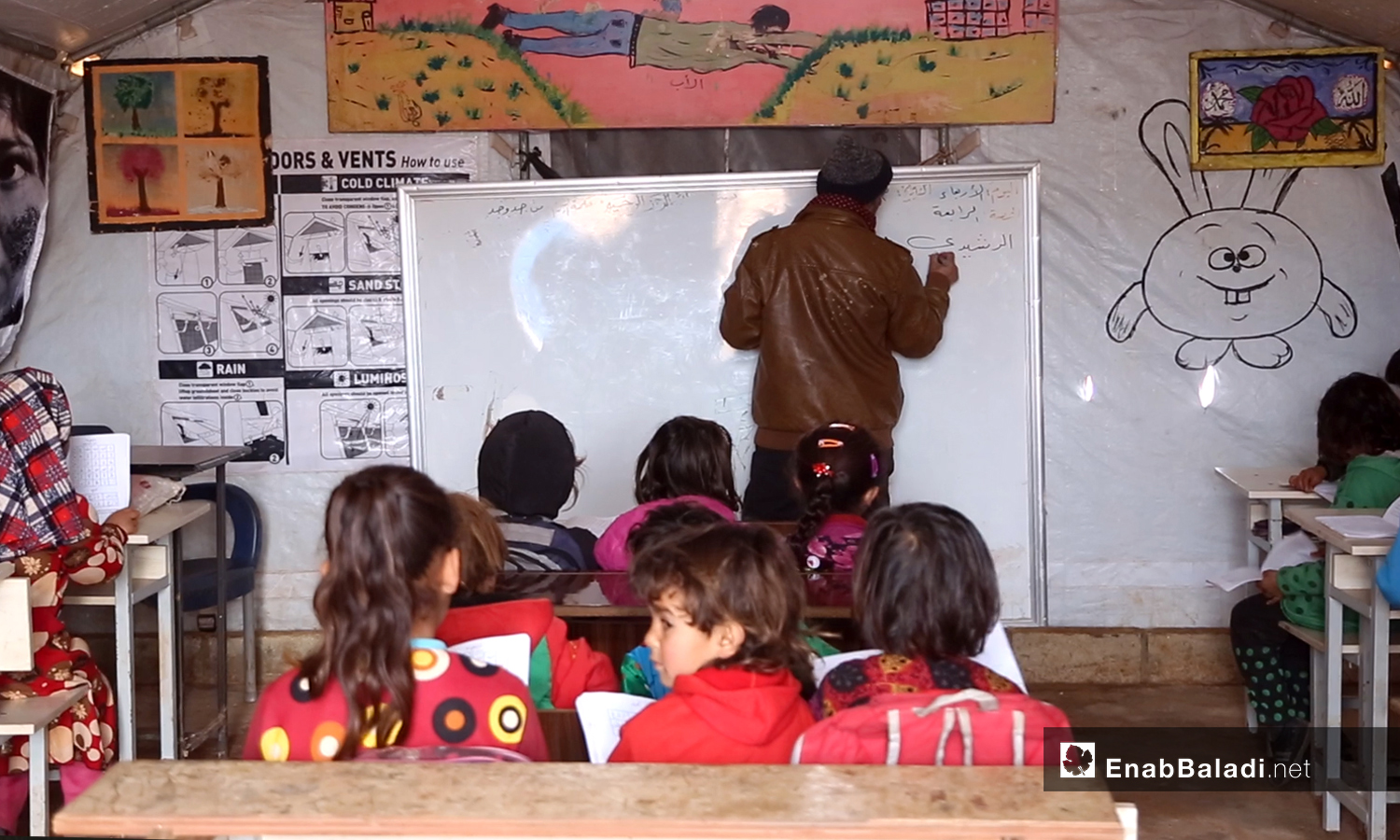 After finishing his hours as a volunteer teacher in one of Nahleh town’s schools in the southern countryside of Idlib, Saher al-Jazzar headed to his second job in maintaining Internet (Wi-Fi) towers on the outskirts of his town of Bzabour. The towers’ area was bombarded on 24 Februray, and the teacher lost his life.

The social studies teacher, al-Jazzar, was a father to two children who lived away from him in Lattakia governorate with their mother. He wished to remarry and had a second job besides teaching to cover marriage expenses because he was not paid for his teaching job for a whole year.

The Education Directorate in Idlib could offer nothing but condolences to the deceased teacher’s family. It failed to secure salaries and compensation fees for teachers, whose poor financial conditions left them with no choice but to resort to demanding, dangerous, and unusual occupations for certificate holders.

Since the beginning of 2020, the European Union (EU) suspended its funding to the Education Directorate in Idlib governorate and limited its support to the first cycle of basic education. The EU continued its financial support to the second cycle of basic education and high school level through the Manahel organization for education in Idlib, the Director of Basic Education Department of Idlib’s Education Directorate, Mahmoud al-Basha, told Enab Baladi.

Volunteering for the sanctity of teaching and education

The headmaster of Jeel al-Nasir school Hussein Hashem believes in the sanctity of his profession. Al-Nasir has been working in the field of education for 30 years now and started working voluntarily a year ago without being paid except when he received a grant of 200 US dollars that he awarded to top students in his school in 2020.

The fifty-year-old man relies on separate temporary jobs to provide for his family of eight members. He took jobs such as cutting and selling wood or harvesting in agricultural seasons. “The teaching profession is one of conscience and a lofty mission,” Hashem said. He believes that education will never fail in its mission as long as there are teachers thriving to deliver knowledge to new generations “at any cost.”

“Teachers with a steady income will enter the classroom differently from those preoccupied with how to secure bread and house rent for their families,” Hashem said. He also pointed out that had there been an entity responsible for monitoring organizations’ works and implementing projects whose revenues would be dedicated to teaching, education would have been better today.

The Director of the Basic Education Department in Idlib, Mahmoud al-Basha, highlighted the fact that the lack of funding is affecting the quality of education. He added that when teachers get paid for their work, they exert more serious efforts and seek further tasks to perform; however, “volunteer teachers cannot be expected to be at the same level”.

Al-Basha mentioned that there are 20,000 teachers in the region, including 5,500 volunteer teachers. More than 60 organizations support education in Idlib governorate, leading to disparities in teachers’ wages depending on the funding provided by supporting organizations, al-Basha said.

“The future of education is uncertain,” al-Basha said, noting that the relative stability established after signing the ceasefire agreement on the frontlines with the Syrian regime by Russia and Turkey a year ago—despite the ongoing breaches—creates a possibility for receiving a European, Turkish, or American support or from partner organizations that used to operate on Syrian territories.

The Education Directorate’s supervisor in Hama, Khaled al-Fares, told Enab Baladi that the lack of financial support had a “substantial negative impact” on the educational process. Teachers are being forced to abandon teaching and go after alternative jobs to fend for their families.

Hama’s Education Directorate has 18 schools distributed in northern Idlib regions. The teaching cadre includes 159 female and male teachers, 25 of whom receive salaries, in addition to 124 volunteer teachers enrolled since the beginning of 2021, al-Fares said.

According to al-Fares, the reason behind the lack of organizations’ funding for education in Idlib is that support has been diverted to other projects in fields such as health, maintaining infrastructure services, and relief works. The organizations’ financial support covers only 20% of the region’s educational needs.

Al-Fares thinks that the solution is through coordinating with the United Nations Children’s Fund (UNICEF) to support the region and the Syrian Salvation Government (SSG), the de facto authority in Idlib, to maintain education’s independence as some organizations try to control the education process and impose certain conditions on schools, which al-Fares refrained from naming.

The monthly salary required for teachers to afford a normal standard of living is estimated at 150 USD, al-Fares said, noting that the prospects for upgrading education remain low in the region without financial support.

Activists and some residents carried out community-based initiatives in a number of cities and towns in Idlib governorate to support teachers financially and secure their salaries, fearing that they would leave their jobs under financial pressure. The initiatives raised money from local residents and expatriates to support education funds in those areas.

Fadi al-Absi, a member of the Ariha Charity Emergency Committee, described the situation of education in Idlib as “a war”. He told Enab Baladi, “with knowledge, nations rise,” this common realization promoted the region’s residents to launch a campaign to support teachers.

Since the beginning of the school year, the committee managed the fundraising campaign so that teachers would not have to abandon teaching after being cut off from organizations’ support due to their region’s proximity to the contact lines with the Syrian regime.

Al-Absi said that the initiative was launched with the participation of some philanthropists from the city and some expatriates to support 180 teachers in more than 10 schools in Ariha city.

The fundraising campaign did not collect the desired amount but raised some money that was distributed as a one-time salary of 120 USD to each teacher. The campaign continues in the hope of raising enough money for the second semester, despite the committee member’s belief that community-based initiatives cannot solve teachers’ financial problems.

Students were also affected by the lack of financial support to teachers, as some parents forced their children out of school, claiming that their children were not receiving education anyway, while few parents resorted to private schooling, according to al-Absi.

Education is essential, and schools are indispensable, al-Absi added.

Al-Fares, on the other hand, described community-based initiatives to support teachers as “quite good,” such as those carried out in Kafr Takharim or Jisr al-Shughur. These initiatives contributed to enhancing the educational level but failed to secure teachers’ salaries and logistic costs that governments usually cover through allocating permanent budgets to solve the problem.

As for Jeel al-Nasir school’s headmaster, Hussein Hashem, he believes that community initiatives do not meet teachers’ aspirations and barely cover a small part of schools’ operational costs. Still, Hashem thinks that social solidarity funds, if supported by organizations and distributed fairly, can support all the liberated Syrian regions’ schools.