With the Syrian Constitutional Committee nearing failure, any hope left for the political process? 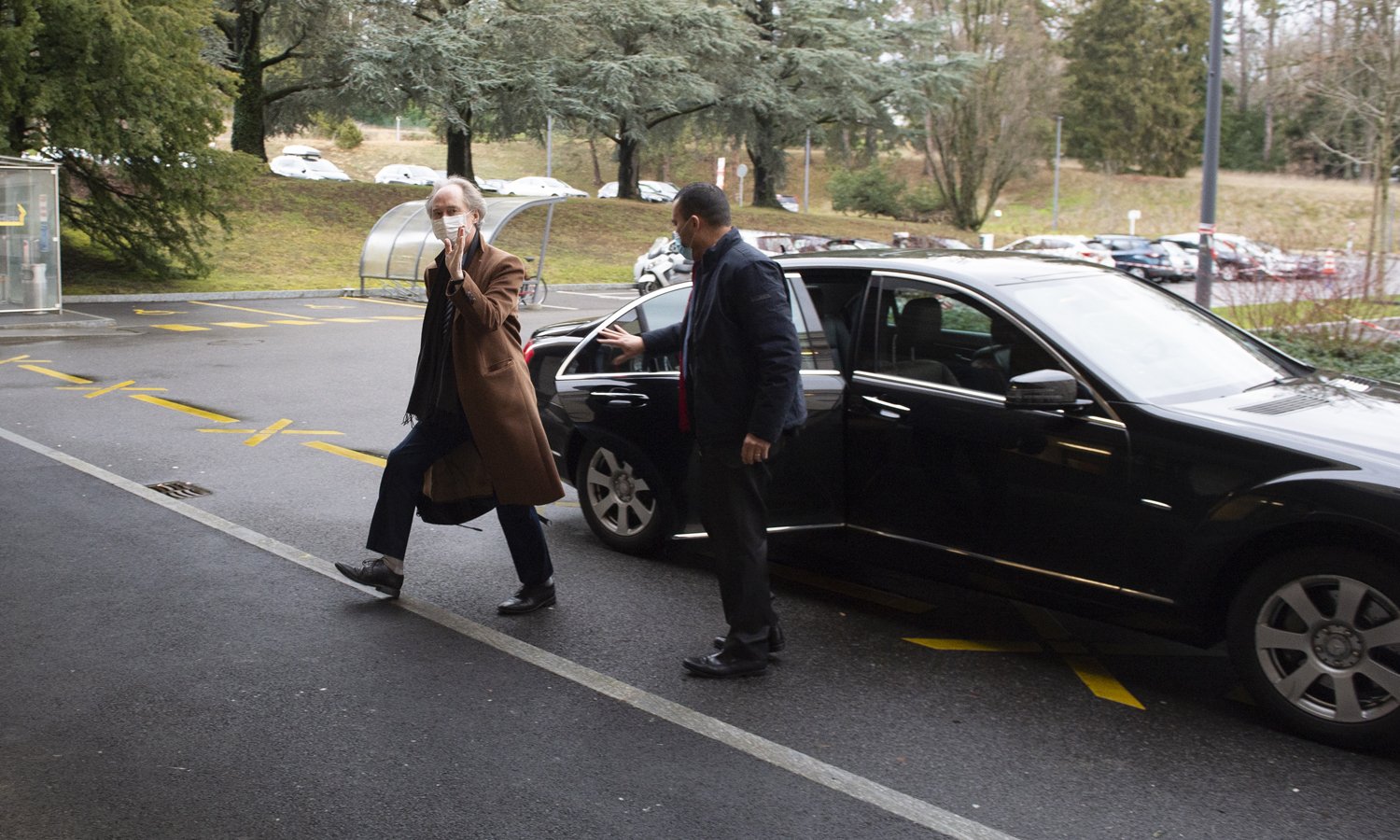 United Nations Special Envoy for Syria Mr. Geir Pedersen on the way to the fifth session of the Syrian Constitutional Committee —29 January 2021 (UN) 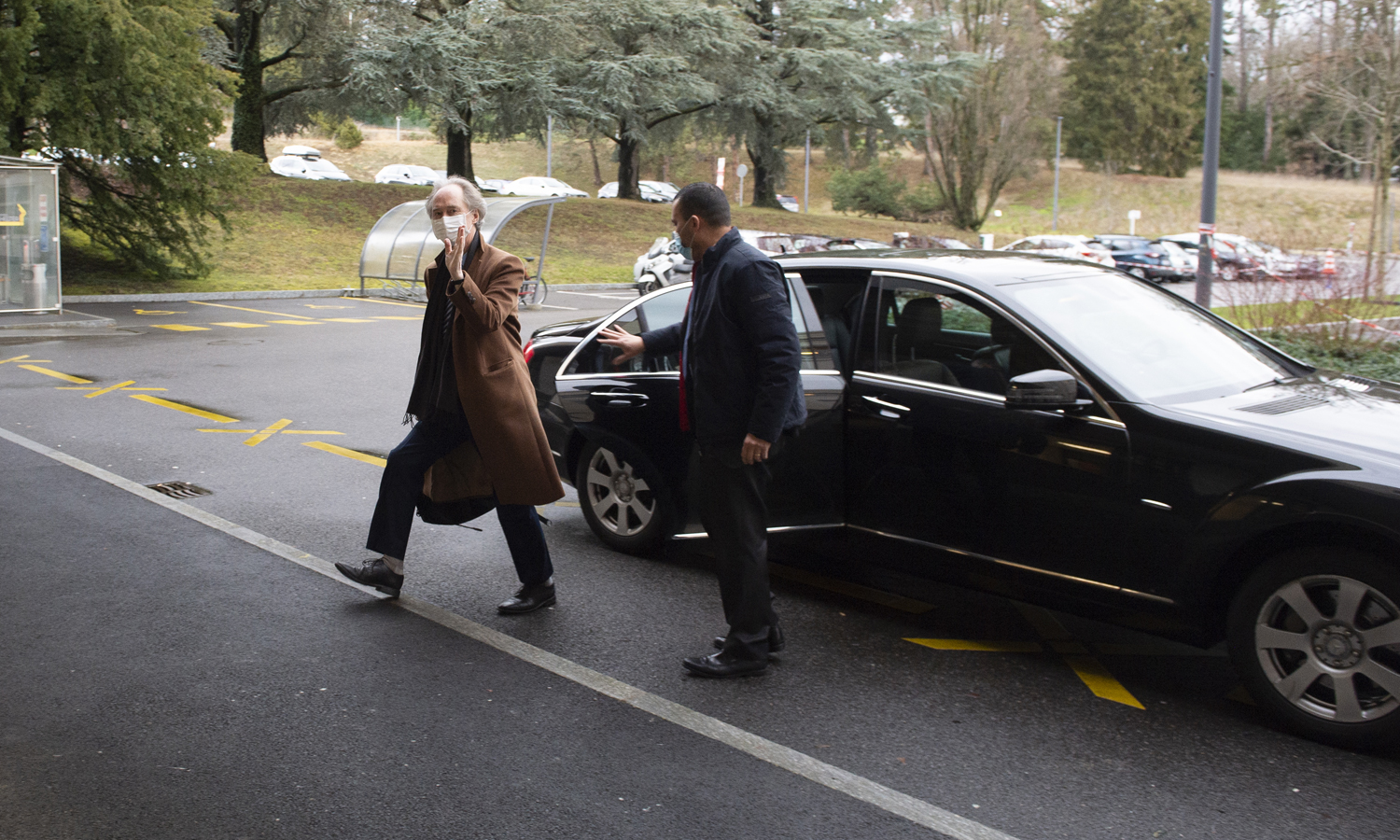 “The ball is in the international court,” Co-Chair of the opposition delegation, Hadi al-Bahra, said commenting on the latest round of the Syrian Constitutional Committee’s talks.

What he said sums up the outputs of five rounds of the committee’s work over 15 months, which have neither culminated in a solution nor demonstrated a beginning on the path towards a political solution.

Al-Bahra’s position was not more optimistic than Geir Pedersen’s, the UN Special Envoy to Syria, who said that the work of the Constitutional Committee could not continue like this, describing the last fifth round as a “disappointment”.

During a press conference at the end of the 5-day fifth round, which wrapped on 29 January, Pedersen said that “the reason for that is that there has not been a proper understanding on how we are going to make progress in the Committee.”

The fifth round was brought to a close, again without an agreement on the basic principles for drafting a new constitution for Syria, the primary goal of the Committee that was formed in accordance with UN Resolution No. 2254, which provides for the formation of a transitional governing body and the organization of new elections.

The regime, through its delegation, has continually attempted to disrupt the Committee’s workflow, referring to former agreements such as “Adana”, discussing minor details, including the flag and the national anthem, or stalling the process by delivering long speeches during sessions to consume time.

The day before the round, the UN Special Envoy held extensive discussions with the two Co-Chairs of the opposition and the regime on the sort of working methods for the Constitutional Committee. However, the session started without a consensus.

What is the point?

Former Syrian diplomat Bashar Hajj Ali told Enab Baladi that the five rounds were “an attempt to break the deadlock.” They were also a reminder to the international community of the nature of this regime and its advocates, as well as the legitimacy of the Syrians’ demands “to uproot the regime altogether, as it is neither reformable, nor participatory.”

According to Hajj Ali, with the stalled negotiations and the “diminished horizons of a political process,” participation in the Constitutional Committee was a manifestation of hope that it would be an opening to jumpstart the political process and implement the UN Resolutions No. 2254 and N. 2118, as well as the Geneva Communiqué.

Pro-opposition professor of International Relations, Faisal Muhammad Abbas, does not see a point in the opposition’s continued engagement in the work of the Constitutional Committee.

“The Committee is basically putting the cart before the horse,” Professor Abbas told Enab Baladi. The Committee is doing things in the wrong order. In line with UN Resolution No. 2254, the establishment of a transitional governing body with full executive powers should precede changing the constitution.

Professor Abbas pointed to the issues hampering the Committees’ activities, including the fact that the Constitutional Committee does not have a clear working agenda and is not committed to specific deadlines, which allows the regime’s delegation to procrastinate and postpone the consideration of essential matters indefinitely.

The opposition’s leniency is another issue, as it was tolerant even of the Committee’s constitution process and the nature of the representative bodies it encompasses.

Pedersen’s statements at the end of the fifth round that the Constitutional Committee could not continue like this indicate that the Committee has reached a dead-end for the time being. And the talks that the Special Envoy intends to hold with Syrian regime officials “are unlikely to change the regime’s position,” said Professor Abbas.

At the end of the fifth session, Pedersen said that he hopes to visit Damascus to discuss with officials there the implementation of Resolution No. 2254. And that he has been to Ankara, to Cairo, and after that Moscow, Tehran, and Riyadh while keeping in touch with “Arab friends” and European interlocutors, as well as the new U.S. administration.

On the third day of the Committee’s fifth session, a Russian delegation, headed by the Special Envoy of the Russian President for Syrian Affairs, Alexander Lavrentiev, with Iranian and Turkish officials arrived in Geneva “to salvage the constitutional process,” Asharq Al-Awsat reported.

The three delegations’ visit presumably aimed at holding a meeting for the Astana Talks’ guarantor states, but the concealed purpose was “working to keep the constitutional process alive,” according to Asharq Al-Awsat.

There are three reasons why the delegations seek to save the constitutional process, Asharq Al-Awsat claimed.

First, the Constitutional Committee is displayed as an “achievement” of the actors’ trilateral talks in Astana and then Sochi. Second, the actors would like to convey a message to the U.S. President Joe Biden’s Administration that “they have a say in the political and military processes in Syria.” And finally, they want to “prevent declaring dead the Constitutional Committee against the wishes of Western states.”

“It is unlikely that the arrival of three delegations from Russia, Iran, and Turkey to Geneva is the result of a common agenda.” Rather, it appears that each party wants to pressure its affiliated components within the Committee to ensure that the outcomes are marketable before the international community, according to Professor Faisal Abbas.

However, the decisive factor to realize any progress within the Committee’s work is whether Russia will put enough pressure on the Syrian regime, before pressing the regime’s delegation. So far, Moscow does not seem willing to do so effectively.

It is normal for the intervening and interested countries to rush to Geneva after the fifth round neared failure, particularly the countries of Astana Talks, which have a strong influence on the Constitutional Committee’s work, former diplomat Bashar Hajj Ali said.

With the new administration, the U.S. presence, according to Hajj Ali, is an indication of interest in the Geneva process and the real condition of these constitutional rounds.

The European position of the Committee is useless, as it resembles the persistent attitude toward the war in Syria. “This position is generally vain and lacks necessary effectiveness,” Professor in International Relations Faisal Abbas said.

For his part, former diplomat Bashar Hajj Ali believes that the European Union (EU) and the West, in general, have an essential role in scaffolding the political process, and “in rejecting legitimization of the al-Assad regime,” particularly with the EU and the Caesar Act sanctions, and the UK’s clear position that the regime, and any measures it takes, are illegitimate.

Is the Committee dead?

In a Washington Institute policy analysis, published in December 2020, French Diplomat Charles Thépaut said that: “The United States and its allies would be wise to set an expiration date, calling for the body’s termination if it does not deliver in a few months.”

The Committee has actually failed to deliver “appreciable results.”

The Constitutional Committee’s work would be futile should it not conclude its talks before the next presidential elections (expected in July 2021), because the international position on the political process in Syria was clear, that no political decisions would be considered unless they are in line with  UN Resolution No. 2254 and N. 2118, as well as the Geneva Communiqué, Spokesman for the opposition-led Syrian Negotiation Commission, Yahya al Aridi, told Enab Baladi earlier.

The idea to form the Constitutional Committee was originally put forward during the Russia-sponsored Congress of the Syrian national dialogue in its Black Sea resort of Sochi on 30 January 2018. The event’s final statement said  it has been “agreed to form a constitutional committee comprising the Government and a wide-represented opposition delegation for the drafting of a constitutional reform . . . under the UN auspices in accordance with Security Council Resolution 2254.”

Next, there was a series of negotiations, objections, and obstacles on both sides.  The Syrian opposition, represented by the High Negotiation Committee (HNC), refused to consider the “Sochi” conference as the Constitutional Committee’s frame of reference or the regime as its Chair.

Instead, the HNC requested that the Committee’s reference be the UN Security Council Resolution No. 2254.

The initial reaction of the Astana talks’ guarantor states— Russia, Turkey, and Iran— was scheduling the next and 15th round for 16 and 17 February in Sochi city, which 1st session was held over 23 and 24 January 2017, bringing together representatives of the Syrian regime and a delegation of the opposition.

During the first session, held on 30 October 2019, the Constitutional Committee was supposed to agree on methods to draft a new constitution in line with UN Resolution No. 2254.

It took the Committee a whole year to hold its first session, following which several challenges to its work ensued, including the formation of the representative delegations, lack of agreement on the terms of reference and core rules of procedure; the complex nature of the discussions during the sessions, the regime’s continued attempts to circumvent, manipulate, or disrupt comping up with an agenda, and the absence of definite deadlines.

The Syrian Constitutional Committee’s talks in Geneva are a “political game,” not at all what most Syrians focus on, President of the Syrian regime, Bashar al-Assad, said in a Sputnik interview on 8 October 2020.

According to al-Assad, it is not the constitution that Syrians think of; no one is speaking of the constitution. What the Syrian people are interested in is reforms that have to be informed and the policies that need to be changed to ensure that their needs are met.