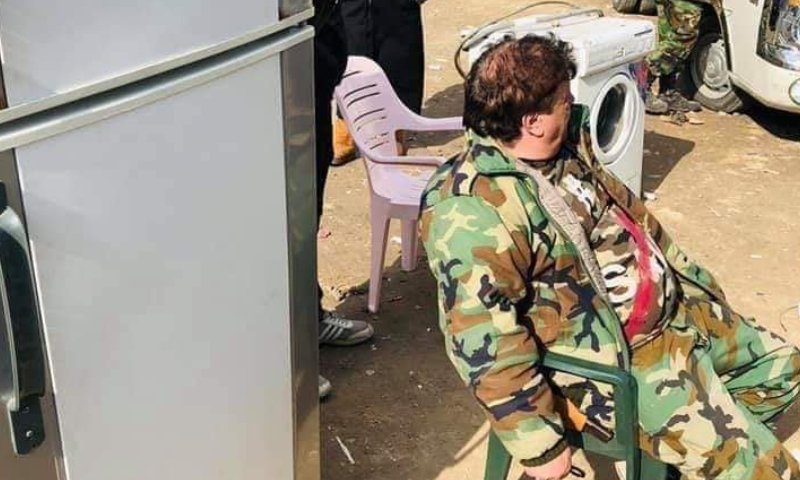 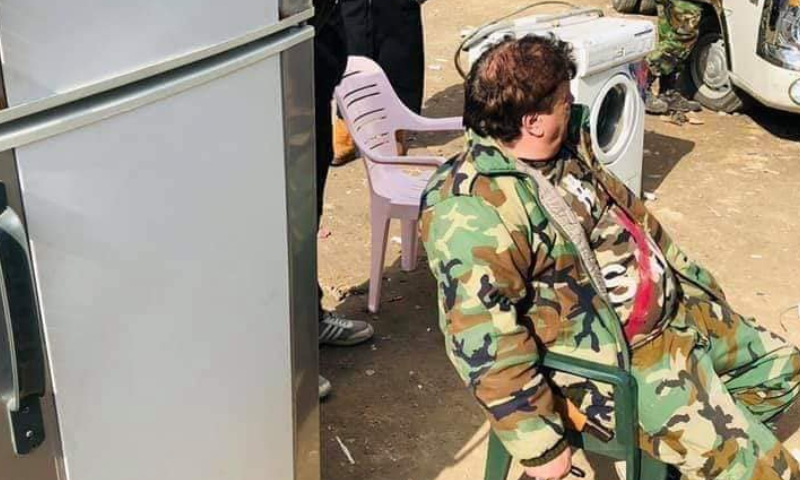 Vehicles loaded with household items left the towns of Kafr Hamrah, Hreytan, Anadan, Bianoun, and Hayyan in northern Aleppo countryside and passed in front of Yasser, who was sitting inside his shop which he reopened after being displaced. At that moment, Yasser became a witness to a robbery that he had no right to object to.

The vehicles transport civilian’s possessions from previously opposition-controlled towns a year ago into the city of Aleppo. Then, they unload the stolen household items in shops selling used electrical appliances, including refrigerators, washing machines, and televisions.

The selling operations of civilians’ belongings are carried out by members of the Syrian regime forces with their officers’ knowledge, in daylight and openly. They publicly sell stolen items in street bazaars, where interested people can buy whatever they choose and move their purchases through the regime’s checkpoints as well.

The towns of northern Aleppo countryside, controlled by the regime’s forces in mid-February 2020, are divided into four military sectors. The Air Force Intelligence branch in Aleppo controls the towns of Hreytan and Hayyan, while the Military Security and State Security branches control Bianoun and Anadan.

The Fourth Division controls Kafr Hamrah and spreads its security barriers along the road in the northern Aleppo countryside, where, according to Yasser, it imposes large sums on cars of all kinds, even private ones, before allowing them to pass. Yasser, who requested that his full name be withheld, returned to his hometown, Bianoun, after fleeing it before due to infighting and shelling. He said, “vehicles were exiting the town carrying household items looted by regime elements.”

When the armed opposition factions’ defenses collapsed, the residents were forced to flee immediately, as the regime and its militias announced their control on the northern Aleppo countryside towns, which included parts of the western Aleppo countryside such as al-Mansoura, Kafr Da’el, and Tell shwehneh.

The regime forces found the residents’ TV screens still running when they entered their houses, one of the regime’s elements, who was part of the sweeping operations to civilian houses, told Enab Baladi, confirming that the homeowners were only capable of taking their clothes with them.

Yasser managed to leave his town on 11 February 2020 and headed to Aleppo via an ambulance. “We couldn’t take anything from the house’s items of electrical appliances or furniture. I arrived in the Maysaloun neighborhood and stayed for some time in my aunt’s house, but it was completely empty.”

The equipment and furnishing cost of the temporary house during Yasser’s displacement amounted to nearly three million Syrian pounds (SYP = approximately 2,900 USD, according to the Syrian pound’s exchange rate against the USD in 2020) before returning to Bianoun. “When I returned to my house, I found it completely looted,” Yasser said, estimating the losses at 4.5 million SYP (about 4,300 USD).

The regime’s forces looted everything from the houses of the displaced and forcibly evicted. “They took out the ceramic and porcelain tiles from the houses’ walls and floors to sell them,” a shop owner of used household appliances told Enab Baladi on the condition of anonymity for security reasons, explaining the mechanism for selling and buying looted items.

Buyers transport purchased items in their private cars, and as they pass through the Fourth Division’s roadblocks, they are forced to pay a fee for the stationed elements to allow them to pass, according to the shop owner. He added that the regime’s roadblocks charge fees from all buyers “even if the household items were purchased from the Fourth Division elements.”

The looted household appliances are sold in towns’ markets and sometimes within the civilians’ houses. The regime forces accompany the buyers to the residents’ closed houses, and “after the selling, the buyers transport the items in vehicles at their own expanse.”

Vehicles carrying stolen items pass through the Lermon Roundabout, connecting the towns of Kafr Hamrah, Anadan, Bianoun, and Hreytan to one another. There are checkpoints for the Fourth Division along the road, forcing drivers to pay a fee in return for passing and heading either to Aleppo city or Aleppo’s northern and western rural towns.

The second-hand household appliances’ shops proliferate in Aleppo neighborhoods. These shops witnessed a growing demand due to their affordable prices, as the prices of new electric household appliances are beyond the residents’ purchasing power. For example, a new refrigerator of the al-Hafez brand costs a million and 200 thousand SYP (400 USD), while a second-hand one does not cost more than 500,000 SYP (about 167 USD). A new LG automatic washing machine is priced at 900,000 SYP (300 USD), while the used one’s price does not exceed the threshold of 350,000 SYP (116 USD).

The sellers seek looted goods that are in demand by the buyers’ side. “Some buyers question the source of these items, and when they know, they refrain from buying, while others conclude the purchase without any problem,” the vendor of second-hand items said. “This is business, I buy these household appliances with my money, and I have no problem whether they are looted or not.”

Some of the houses in Bianoun are still locked by military security elements, who have been selling the houses’ belongings to whoever pays more, a military security member told Enab Baladi after demanding that his name would not be mentioned. “We offer furniture, electrical appliances, cooking tools, and bedrooms’ furniture for sale, and whoever pays the required amount becomes the owner of these items. There are special bazaars set at specific times for selling the displayed household items of many houses. The buyer with the highest price receives the goods. The sold items are transported on patches twice every day.

The regime elements split the profits among themselves after concluding the sellings. Even though officers do not oversee the sellings or the bazaars, they receive their share of the sales’ profits on a daily basis.

The officers take a share of about 60% for every selling. They receive an amount between 2 million and 4 million SYP (508 –  1.017 USD) every day and accept nothing less, an element in the Air Force Intelligence, who requested not to be named, told Enab Baladi.

“About a month ago, the duty officer noticed that the amounts delivered after the sellings were incomplete and stolen by some elements,” the Air Force Intelligence element said. As a result, the unit’s elements were subjected to collective punishment of solitary confinement and haircutting for some of them, while others were denied permission to go home on their monthly leaves.

The northern Aleppo countryside towns have witnessed some former residents’ return to their houses over the past six months. They had no alternative housing options in Aleppo city and could not afford the increasing monthly rents.

After the regime and its militias declared their control over the region, they called on displaced civilians to return, but only a quarter returned, according to estimates by people wishing for their old neighbors’ return.

The returnees were harassed at the roadblocks set at the towns’ entrances. Yasser, who returned to Bianoun in September 2020, said that six young men were arrested at the security checkpoint at the town’s entrance while they were trying to reach their houses.

Aref, a resident of Hreytan town, saw his housewares put on sale. He said, “I couldn’t do anything, as any action could cause me problems with security elements.”

“While I was wandering in the town’s streets last September to buy some items for my house, I was surprised to see a man selling blankets and duvets that were once used in my house,” Aref said. “I approached the seller and asked him about the covers’ price, he responded with 300,000 SYP (76 USD). It was painful to see my belongings stolen from my house and sold in the bazaar.” “I enquired about the shop owner, and a friend told me that he was working for the Air Force Intelligence,” Aref said, adding that he had refrained from buying his stuff from the shop owner.

Aref said the returning townspeople could not file complaints against the regime elements carrying out the lootings because they control the police stations. “The protector is the thief, and we can’t do anything but wait for God’s justice against these monsters who stole my lifetime of hardship and labor in this way.” Aref estimated his house and sewing workshop’s losses to be around 60 million SYP (20,000 USD).

Today, Aref lives in debt until he starts working again.