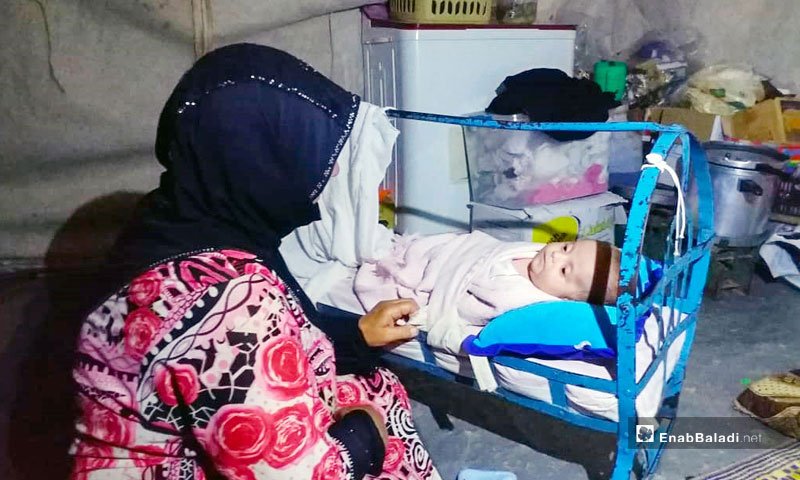 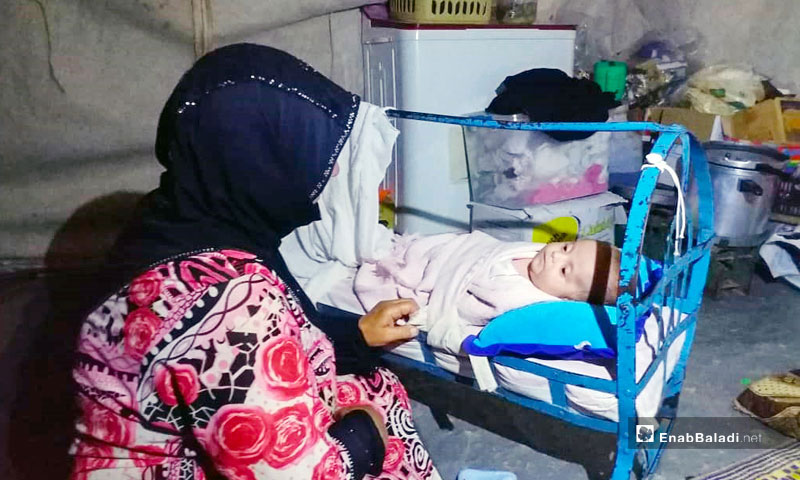 Seeing the two red lines of a pregnancy test could be an indication of future happiness in the family. Yet, pregnant women living in Syria’s displacement camps also feel fear and apprehension because they have no idea where and how they will give birth.

During pregnancy, women experience the most difficult months of their lives. A pregnant woman needs special care to shoulder the burdens of carrying the fetus. She must take care of her physical and psychological health in order to ensure her unborn baby a safe and normal growth. Unfortunately, displacement camps lack support and care services for pregnant women.

Women visit the doctor only once

Soad al-Muhammad, who is 21 years old, lives in the Ramdoun camp near the town of Kafr ِAruq in Idlib. Throughout her pregnancy, she visited a gynecologist only once and was alone. When she felt pregnancy pains and cramps before childbirth, she resorted to a warm mint-drink. The only time she went to the hospital was when she was going into labor due to the long distance between her camp and the hospital, located in the neighboring town.

Al-Muhammad told Enab Baladi that she could not go on a balanced, nutritious diet when pregnant. She also tried to stay away, as is common in her society, from painkillers and drugs that might harm the fetus.

She added that her main problem is that she could not have privacy after giving birth; she does not have privacy because she has to go to the public toilets frequently, especially as she recovers from the delivery.

Ghada Hababa, who is 35-years-old, lives in the al-Jarn camp in Idlib. She told Enab Baladi that she has been living in the camp for many years, during which she encountered many critical challenges. And when she got pregnant, she already had many responsibilities. She had to take care of herself, her unborn baby, and her five children. This made her sixth pregnancy very exhausting.

In addition to the pregnancy pains, Hababa has been suffering from back and joint pains for months even after her birth.

Hababa said that usually, women get some rest after giving birth for days. Unfortunately, she did not have this opportunity because she has a big family that depends on her, especially since her eldest son is disabled and requires extra care and attention.

When Hababa gave birth to her first child, she found out that she has an Rh-negative blood type and needs a RhoGAM shot at each delivery.

She was making sure that she would get one before her due date, with the help of her acquaintances who had connections with employees of the hospitals near the camp in which she resides.

The medical sector in Idlib was affected by the military attacks, which did not stop despite the ceasefire agreement signed on 5 March 2020. Northwestern Syria ranks first place in the number of attacks on health facilities during the year 2020.

Assistant Secretary-General for Humanitarian Affairs and Deputy Emergency Relief Coordinator Ad Interim, Ramesh Rajasingham, said that health facilities have already been destroyed and that health services are extremely weak throughout the country. They are being subjected to new “extremes” under the public health impact of COVID-19.

In November 2020, he said, “Due to a lack of beds, women in Daraa in the south were giving birth in rooms alongside other patients.”

Rukban camp has no gynecologists or pediatricians

Giving birth in a room alongside other patients may be considered a luxury for the pregnant women in the informal Rukben camp, located on the Syrian-Jordanian border.

Head of the Public and Political Relations Authority in the Syrian Badia and the director of the medical point in the Rukban camp, Shukri Shihab, told Enab Baladi that with his 15 years of experience as the director of nursing in the intensive care department at Tadmur hospital, and with the absence of doctors in the camp, Shihab along with two midwives and some nurses have become responsible for all the medical services in the camp.

Shihab added that the medical site where he works lacks the simplest medical equipment. There is only the echo ultrasound machine, which has not been changed for five years.

Pregnant women receive antenatal care at Rukban’s medical site in order to spot and treat problems during their pregnancy. Approximately one birth occurs daily in the camp with the help of two midwives from the camp and a few nurses in a room that is not fully equipped. The surgical instruments are sterilized in primitive ways by using flames. Flame sterilization is a technique that does not guarantee the mother or her child’s safety, who might still be exposed to infectious diseases.

The informal Rukban camp has been under an intensified siege by Russia and the Syrian regime since February 2019.

According to Shihab, about 5,000 children have been delivered naturally, while one child has been born by Cesarean section in Rukban camp since 2016.

Hasna al-Mutlaq is a midwife with more than 18 years of experience. She said that she has sufficient knowledge of the possible problems that pregnant women might face during pregnancy and childbirth.

Hasna said that one of the most challenging cases she dealt with was when a pregnant mother had to go through a natural delivery after four c-sections. The medical team was scared of any delivery complications such as bleeding and rupture of the uterus. “luckily, the mother survived,” Hasna said.

Emergency medical cases and critical maternity cases were sent to Jordan through the UN High Commissioner for Refugees (UNHCR).

However, the Jordanian government closed its borders with Syria in March 2020. It suspended all travelers’ entry as part of its precautionary measures to prevent the coronavirus spread. Thus, it became impossible for the camp residents to reach the UN-supported medical clinic on the Jordanian side of the border, which also closed its door.

Gynecologist Nada al-Omari told Enab Baladi that pregnant women need to make prenatal visits regularly to check on their health and their child’s health. During pregnancy, a woman might experience problems that put her life in danger, if not detected early.

One of the most common symptoms associated with pregnancy is anemia. A pregnant woman needs to take vitamins when she has symptoms and signs of fatigue, dizziness, and decreased appetite. Therefore, it is important that the pregnant woman sees her doctor.

There are urgent maternal warning signs and symptoms during pregnancy, such as preeclampsia that can kill both the mother and her child at delivery, as well as gestational diabetes, which may lead to breech birth. Besides, if the fetus was not monitored during the diabetic pregnancy, it might be infected with hypoglycemia.

Doctor Nada al-Omari added that ultrasound examination during pregnancy is very important for ensuring the child’s development and cannot be ignored. It can identify fetal abnormalities or fetal growth restriction, indicating that the child must be delivered immediately before it dies in the womb.

A pregnant woman might experience complications during delivery. In such a case, she would need to be transferred to an operating room. And if she bleeds after birth, the doctor must do a blood transfusion or surgery to solve the problem.