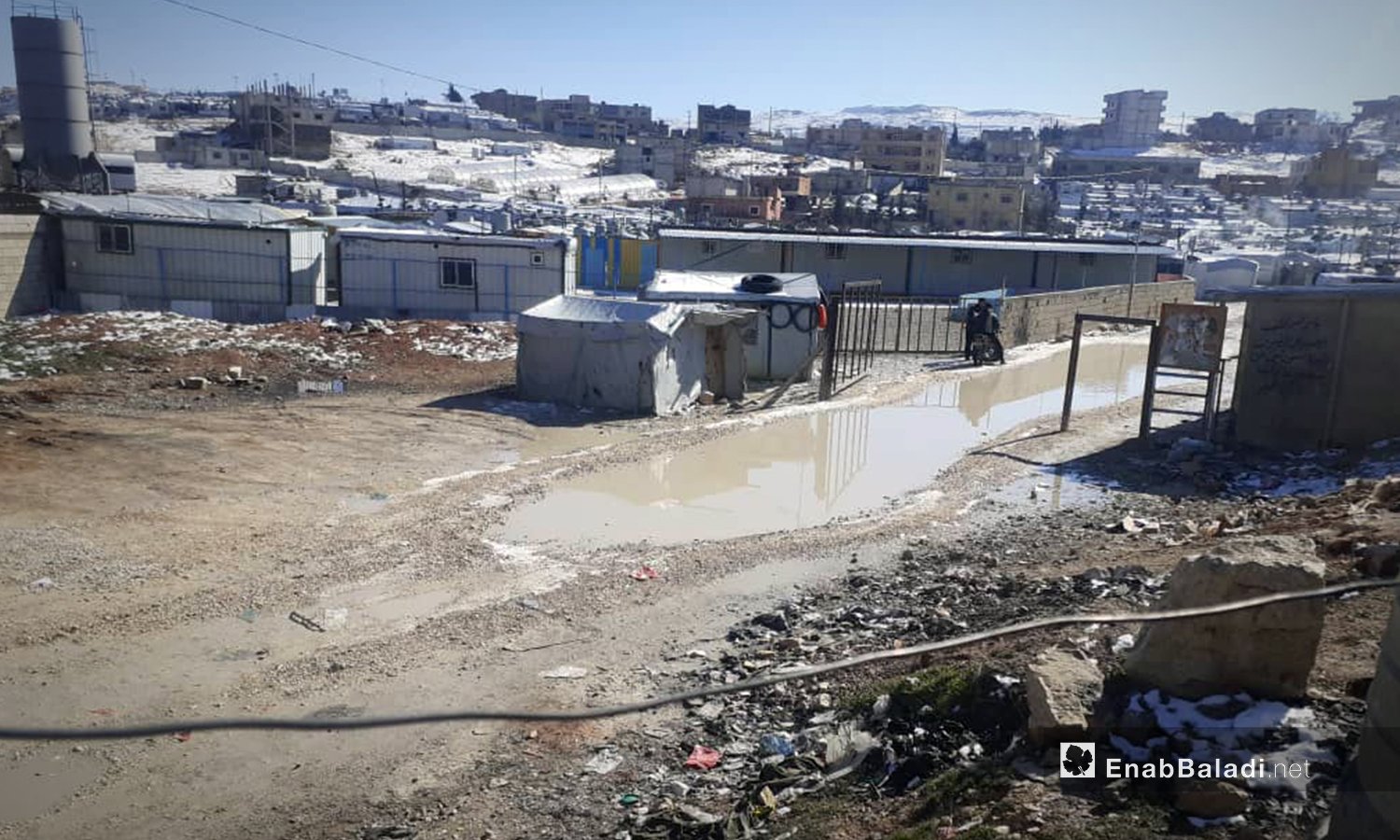 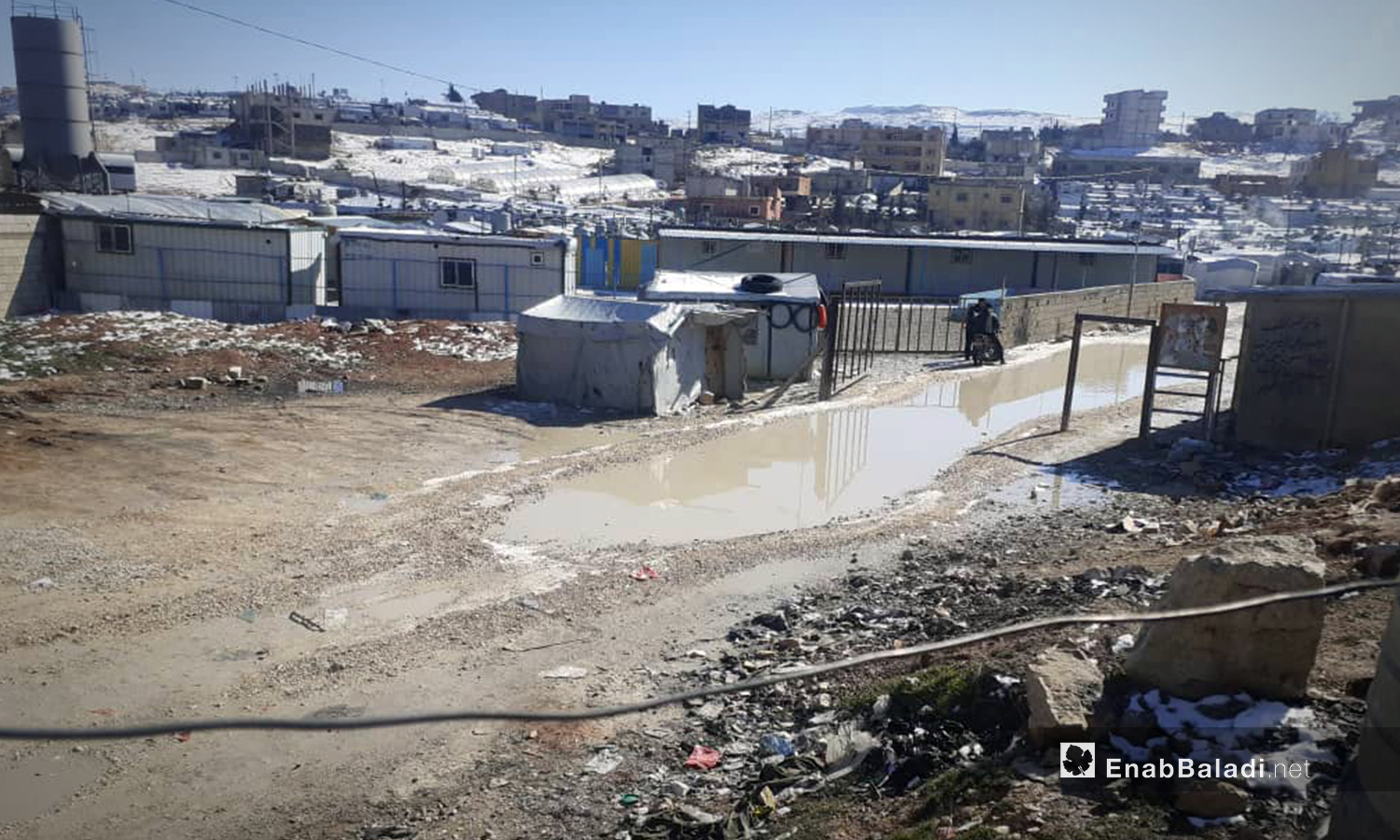 The precautionary and confinement measures imposed by the Lebanese authorities due to the spread of the novel coronavirus (COVID-19) pandemic have left Hassan Fasho, a Syrian refugee in Arsal camps, northeastern Lebanon, unemployed. Today, he lives in debt, waiting for the support of the United Nations High Commissioner for Refugees (UNHCR) in Lebanon.

It has been nearly three years since Fasho, his wife, and his daughter were registered with UNHCR’s relief lists, but it was not until a month ago that he received his family’s fuel oil allocations for the first time. In fact, it was the only time Fasho has ever obtained fuel support.

Our most essential needs include heating fuel oil and food, Fasho said, pointing out that other heating materials, such as wood, are not distributed fairly. Some of the flood-affected tents did not receive any firewood; several intact tents, however, were delivered support, he added.

The tents are flooded every winter because the roads are not paved. The adding of gravel and building ridges is not helping to end the problem because once the gravel is scattered, the roads are flooded again, leaving mud pools everywhere, Fasho said.

Paving roads remains the least of the refugees’ problems in the camps of Arsal. In harsh weather conditions,  people need access to fuel oil,  power, and food assistance. They also need financial aid to pay the rent of the land on which the tents are set, for rents are beyond their ability to afford, Fasho added.

On 20 January, a snowstorm hit different areas of Lebanon, reaching Arsal camps. The accumulated snow in the camps melted, forming puddles of water that flooded the refugees’ tents, furniture, and personal belongings.

Attempting to ease the suffering of Syrian refugees in the cold winter, members of the Molham Volunteering Team (MVT) in Lebanon provided refugees in the Arsal camps with fuel oil assistance.

The MVT’s response was immediate, for the distribution of fuel assistance started in the early hours of the storm.

The team is working on providing 20 liters of fuel oil for each family, which would cover their needs for about five to seven days, the MVT office director in Arsal, Abdul Salam Ghanoum, told Enab Baladi.

So far, all the solutions presented to the Arsal camps’ inhabitants are temporary, and the only sustainable solution is to build concrete housing units to replace the tents. Nevertheless, the Lebanese authorities ban the construction of housing units or concrete shelters for Syrian refugees, leaving the team and other organizations no other alternative but to offer in-kind assistance to the families, Ghanoum added.

Fuel oil and food assistance are the most basic needs in Arsal camps, according to Ghanoum, who pointed out that the relief organizations’ support is not enough because it is seasonal. This assistance is limited to winter and during snow and rain conditions, or in Ramadan.

The harsh living conditions in these camps require international support. The depreciation in the Lebanese lira’s exchange rate against the US dollar, the price increase, the cheap labor, and the frequent suspension of projects due to the pandemic have contributed to worsening the Syrian refugees’ situations, Ghanoum said.

On 19 January, Human Rights Watch issued a report on the Syrian refugees’ situation in the Lebanese town of Arsal on the border with Syria and the absence of adequate shelters this winter.

According to the report, over 15,000 Syrian refugees in Arsal are experiencing their second winter in the area since the Lebanese Higher Defense Council, chaired by the Lebanese president, issued an order requiring Syrians to dismantle their concrete shelters. The order forced them to live without adequate roofs and insulation, exposing them to harsh winter conditions, including subzero temperatures and flooding.

In July 2019, the Lebanese Armed Forces demolished concrete shelters built by Syrian refugees in Arsal, contending they violated construction codes. The demolition was ordered by the Lebanese Higher Defense Council in May of the same year.

The severe cold is one reason that forces Syrian refugees to build concrete walls to their canvas shelters in Arsal. The concrete shelters are warmer and more wind, snowstorms, and rain resistant than tents. Besides, the concrete walls can be equipped with doors and windows to protect the refugees’ privacy and ensure their safety.

“Living conditions of Syrian refugees living in Arsal who were forced to dismantle their shelters in 2019 remain dire,” said Michelle Randhawa, the refugee and migrant rights senior coordinator at Human Rights Watch. “Their situation, compounded by Covid-19 movement restrictions, threatens their safety and their very lives.”

There are an estimated 15,000 shelters in the Arsal area, including 7,000 with stone walls and 2,500 with concrete ones, according to the health-care program officer of the Union for Relief and Development Associations (URDA) in the region, Ziad Aziz.

The humanitarian response programs for Syrian refugees in Lebanon, which provide shelter, are largely underfunded. They needed about 155.6 million USD, but they only raised 27 million USD in November 2020, which means only 17 percent of the overall sum, according to the URDA.

Syrian refugees in Lebanon suffer from a significant rise in prices and rents, owing to the accelerated inflation in the country, which sometimes forced them to choose between buying food and basic needs or paying bills.

According to the preliminary results of the Vulnerability Assessment of Syrian Refugees in Lebanon (VASYR) of 2020 carried out by the World Food Program (WFP), UNHCR, and the United Nations Children’s Fund (UNICEF), the economic crisis and the spread of coronavirus have placed 89 percent of Syrian refugees in Lebanon below the poverty line.