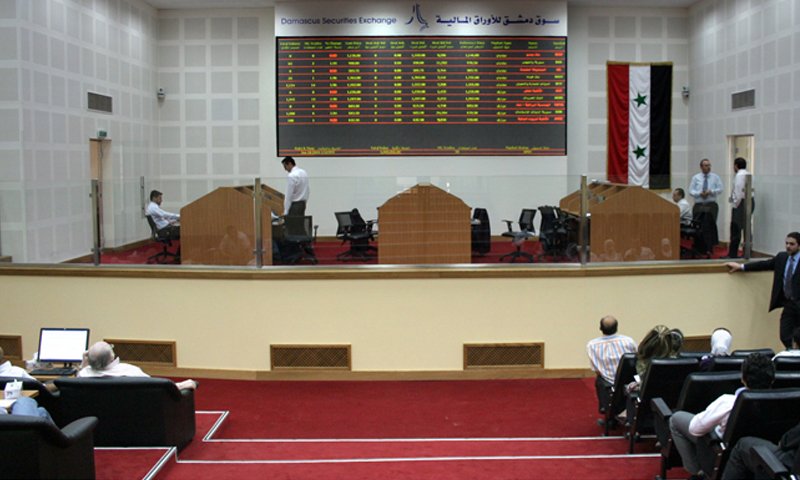 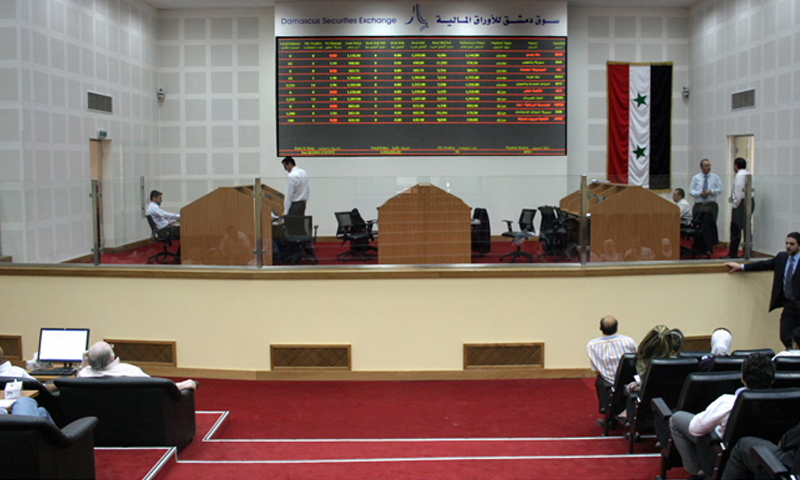 On 19 January, the Damascus Securities Exchange (DSE) closed with a capitalization of about 43 million Syrian Pounds (SYP), equivalent to 15 thousand USD according to the black market’s exchange rate. This total was the sum of only 64 regular deals, a small number, indicating the absence of large cash transactions in the DSE or what is known as “large deals.”

In the DSE, there is a lack of “large deals.” The average daily trading turnover has decreased to a record low, reflecting Syria’s deteriorating economy and confirming the absence of economic and commercial growth in the country.

Governments and monetary authorities are committed to monitoring financial markets’ activities for the significant role they play in the growth of industry and trade. This growth, in turn, affects the country’s economy. When the Gross Domestic Product (GDP) growth rate is positive, the economy is expanding; companies will see an increase in their earnings, making them more attractive to investors. When the economy is growing, investors believe that they are likely to make more profits.

Financial resources through direct financing in the stock market are among the most important mechanisms to expand economic activity in developing countries.

The market aims to provide the appropriate climate to facilitate investment and secure the capital needed to expand its economic activity.

The DSE was established by Legislative Decree NO.55, issued by the head of the Syrian regime, Bashar al-Assad, in 2006. The DSE is located in Damascus.

According to the decree, the market enjoys legal personality, financial and administrative independence. Thus, the market has the capacity to own or freely dispose of movable and immovable money. Furthermore, it can carry out all legal actions to achieve its objectives. It also enjoys the right of litigation.

The market aims to create a conducive investment climate and ensure capital needed to expand economic activities by establishing the foundations for proper, transparent, and fair trading of securities.

The announcement of the opening of the DSE came in line with the promotion campaign which the Syrian government launched to enhance the principles of “social market economy,” which apparently seeks to balance socialism with economic capitalism, according to Syrian economist and researcher at the Middle East Institute in Washington, Karam Shaar.

Shaar told Enab Baladi that “the social market economy” was, in fact, just a cover in which Syria was tending towards economic capitalism without angering the Arab Socialist Ba’ath Party-affiliated popular base.

He added that despite the DSE announcement made in 2006, actual trading did not occur until 2009 in light of most Syrian companies’ reluctance to trade, excluding those operating in the banking sector. This is because trading in the DSE requires a degree of transparency that most business owners in Syria prefer to avoid due to fear of taxes.

Reasons for the low performance of the DSE

The DSE performance declined during 2020 because of many investors’ increased risk aversion to trade and the spread of the novel coronavirus (COVID-19). The negative economic repercussions caused by the depreciation of the SYP against foreign currencies also influenced investors’ decisions in the market.

Trading in the market tended to shrink over the course of the ten-year-old war. The market index declined by more than 40 percent in the first year of the outbreak of the protests in 2011, according to Dr. Karam Shaar.

With the spread of the COVID-19 pandemic, trading was reduced to only one day per week because almost all investors stopped trading in the market amid calls for a complete suspension of trading. The intermediary financial companies sent an official letter to the Securities Commission, requesting the suspension of work due to the conditions imposed by the pandemic.

However, the DSE refused their request to suspend trading; the Deputy Executive Director of the DSE, Kinan Yaghi, confirmed that DSE would continue operating, with trading days reduced to Mondays only. Furthermore, the DSE reduced the number of its staff in order to allow those who want to sell their shares to obtain cash flow. The DSE aims to control the decline in stock prices, “which some may exploit to achieve gains at the expense of small investors.”

Downward market trends are not associated only with the economic effects of the COVID-19 pandemic and the exchange rate fluctuations; the DSE Executive Director, Abdul Razzaq Qassem, said the vast deals regarding the share of some banks were not implemented during 2020, unlike those undertaken in 2019.  In a statement to the local radio station Melody FM on 31 January, Qassem said that investments and transactions in the DSE could not be separated from Syria’s general economic situation.

He added that when the exchange rate was relatively stable in 2017, there was an increase in trading values. However, with exchange rate fluctuations, it becomes tough for the investor to determine the time of his entry and exit from the market.

The deal is classified as significant when its value is more than 25 million SYP (7,462 USD).

To invest in the DSE, people need to open an account with one of the brokerage firms registered in the market. The brokerage firms play the role of mediator between the new investor and the listed companies. They also try to help bring together buyers and sellers at the best price possible for each, extracting a commission for their services.

Qassem indicated that the market is responsible for the financial settlement of ordinary deals. Still, when the deal is huge, the seller and the buyer’s monetary payment is made with these deals’ value through brokerage firms.

He explained that the DSE had previously published the brokerage firms’ names, but not the buying or selling investor. The DSE also discloses the percentages of the company shares.

However, as a result of Western economic conditions and sanctions against individuals and entities affiliated with the Syrian regime, the DSE decided to avoid mentioning names in order to avoid subjecting them to sanctions.

Syriatel outside the market accounts

The companies listed on the market include the telecommunications, banking, insurance, services, industrial and agricultural sectors, and the telecom sector (Syriatel and MTN).

However, Syriatel Mobile Telecom and Cham Islamic Bank– one of the companies listed on the stock exchange– are subject to US sanctions.

The Syriatel Mobile Telecom, which was run by the businessman and the cousin of the Syrian regime’s president, Rami Makhlouf, was not listed in the stock exchange until 2020. Previously, most Syrian investors evaded the announcement of the actual size of their economic activities, as well as the investment environment that was detrimental to most investors. Therefore, the role of the DSE remained marginal before the start of the war, according to Dr. Karam Shaar.

The DSE Executive Director, Abdul Razzaq Qassem, said that the two telecommunications companies, Syriatel and MTN, entered the market in 2020, but their inclusion in the joint-stock companies had no “significant” effect.

He attributed this to the absence of trading in the market for MTN shares due to the company’s structure, which has a small number of shareholders–about 20–and is not publicly traded.

The trading in the shares of Syriatel was declined following the issuance of the Securities and Financial Markets Authority’s decision to suspend trading on its shares due to the relationship and problems between the company and the Telecommunications and Postal Organization.

In April 2020, the Telecommunication and Postal Organization accused Syriatel and MTN of not paying taxes owed to the state treasury. The organization authorized them until 5 May 2020 to pay dues of 233.8 billion Syrian pounds. But the owner of Syriatel, Rami Makhlouf, did not respond. And Makhlouf considered the organization’s request to pay taxes as illegal. This led to his money seizure; he also lost 14 companies during his dispute with the Syrian regime.

The absence of transparency in companies and banks, the limited investment in specific companies and sectors, the lack of stock investment culture, and the scarce information on this economic sector deter individuals from investing in the DSE.

Speaking with the al-Iqtisadi website, on 25 January, Abdul Razzaq Qassem indicated that the market tried to educate people and encourage them to invest in the stock exchange. However, the war in Syria and the general economic situation have made it difficult to cultivate an investment culture.

He said that the crisis that began shortly after establishing the market discouraged the idea of investing in securities as a means of investment. Despite that, the market was keen to raise awareness by presenting many lectures and seminars to those interested in learning the investment mechanisms and trade.