How do rumors affect exchange rates after the Central Bank of Syria issues a new 5,000 SYP banknote? 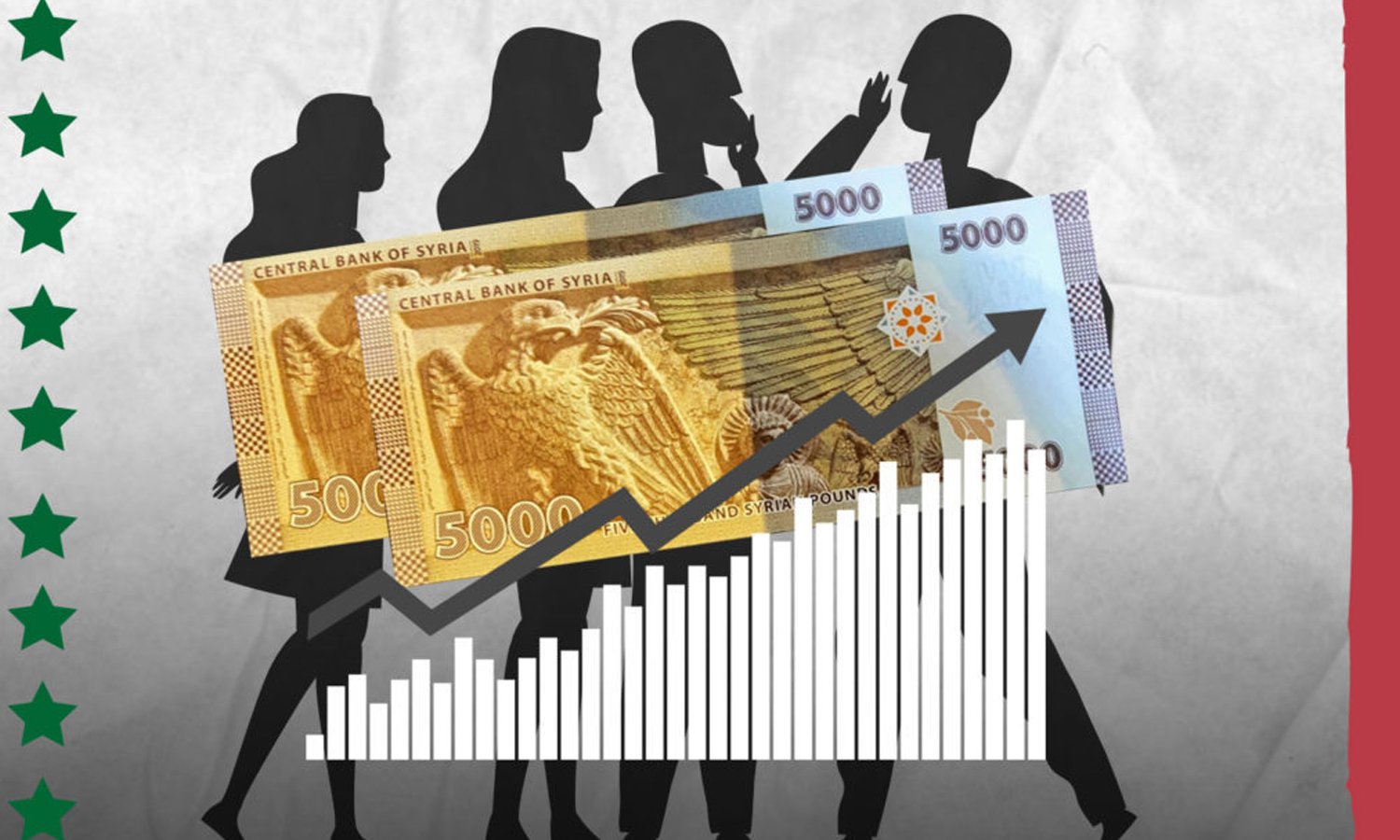 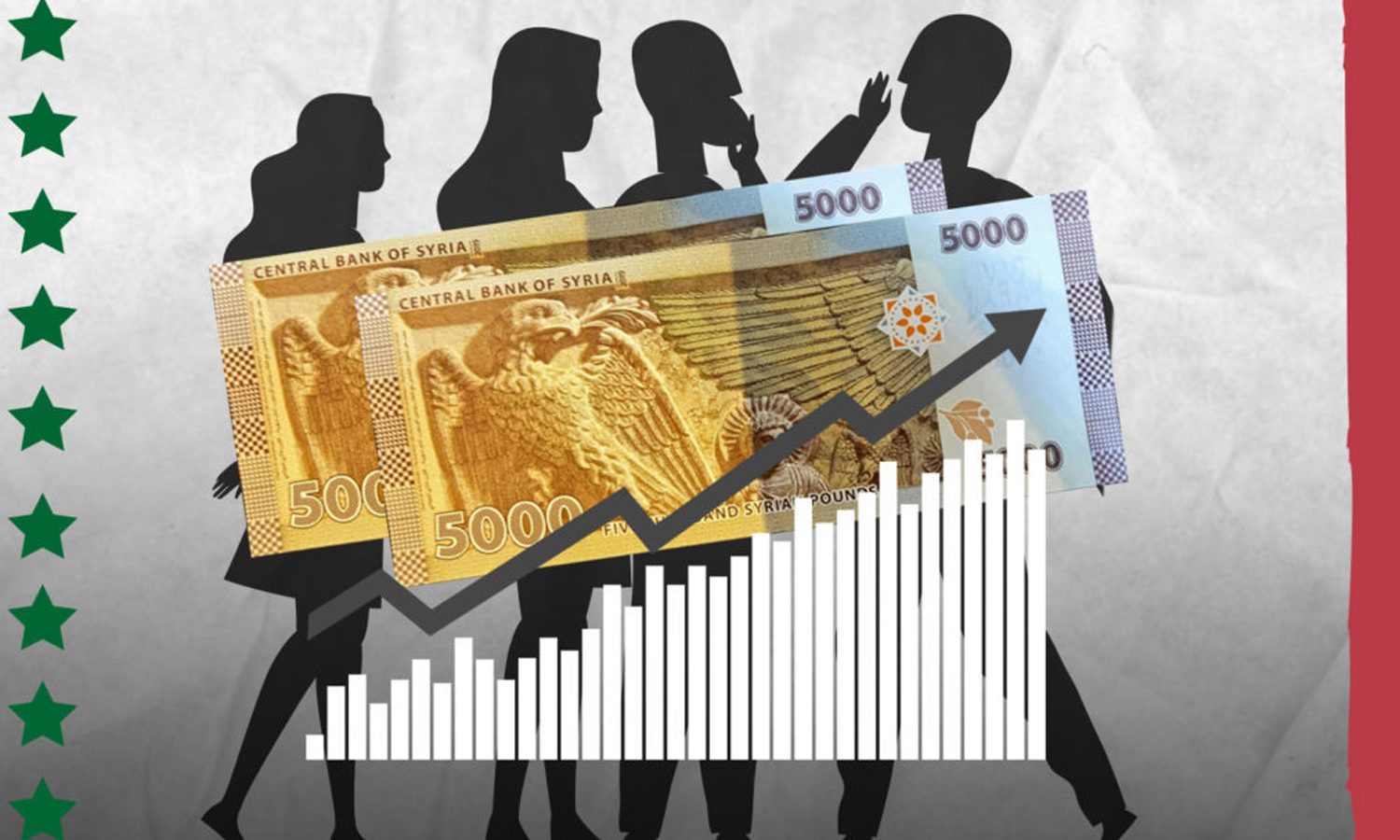 The Syrian Pound (SYP) value sank to a record low against the U.S. dollar (USD) on the black market at the end of January.

For the first time, it exceeded 3,000 pounds to the US dollar, days after the Central Bank of Syria (CBS) issued the new 5,000 SYP note. The pound recorded an exchange rate of 3,020 against the U.S. dollar for sale and 2,990 for purchase on 28 January, according to Syrian Pound Today (a Syrian Pound tracking website).

However, the official exchange rate remained unchanged at SYP 1,256/U.S. dollar, according to the CBS’s statements.

Shortly after the 5,000-pound note was released on 24 January, news spread about the Syrian regime’s intention to issue 10,000 SYP banknotes. Economic analysts linked the release of new banknotes to the depreciation of the SYP and high inflation rates, which lead to the rise of prices of goods and services in the country. All together, these caused a stalemate in some local markets in several regions.

However, some Syrian regime officials emphasized through statements that the release of the new 5,000 SYP banknotes would not affect inflation rates because the Syrian regime did not resort to deficit financing. Rather, the damaged banknotes circulated in markets would be replaced with new ones, without an increase in the money supply.

The director of the treasury department at the CBS, Ayad Bilal, said in a statement to the pro-government Sham FM radio, on 24 January, that the mutilated banknotes will be removed from circulation and replaced with the new category of banknotes. The number of new banknotes circulated in the market will be equal to the number of damaged ones that will be withdrawn from the market. As a result, the money supply in the Syrian markets will not be increased.

Moreover, he considered that “all the rumors about the collapse of the Syrian currency are not true.” The introduction of the new banknotes of 5,000 SYP can stimulate the growth of the national economy by reducing the costs of banknote production, in addition to facilitating the circulation of banknotes among citizens and the preservation of money paper.

Economic analyst Jalal Bakkar told Enab Baladi that neither the Syrian economy nor the Syrian currency has the assets that reflect their actual value. Trading and dealing in SYP today inside Syria and determining its value makes “no sense.”

Bakkar added that, in general, the use of paper money, including the U.S. dollar and the euro, is declining because economies are heading towards the use and circulation of digital currencies. This will weaken economies with no real assets, such as the economies of Syria and Sudan.

The analyst pointed out that the Syrian economic situation does not reflect the fact that there is a real economy in the country because the average budget of the CBS does not exceed 14 billion U.S. dollars.

What is the role of the psychological factor?

Several factors, including the psychological one, have adverse impacts on exchange rate determination and market transactions. They also affect the ongoing turmoil, wars, rumors, news, the amount of money supply, the general budget, the balance of payments, inflation, and changes in the interest rate.

Whether they are fake or not, rumors and news are considered among the immediate effects on determining exchange rateٍs.

How quickly the exchange rates and the currency value will be affected by these rumors depends on market forces and how dealers in the foreign exchange market react to those rumors.

The psychological factor in the stock market is also considered one of the essential factors influencing the exchange rates. If the stock prices fall in one of the markets, and foreign investors fear losses in their investments, and if stock prices continue to deteriorate, they choose to exit the market. Then, they transfer what they have of the national currency into hard currencies.

But economic analyst Jalal Bakkar observes that the psychological factor does not affect the Syrian economy due to the absence of “real” investors. It is a “militia economy” and investors constitute only “people using the Syrian regime or the regime’s crises itself.” Besides, no one else can continue to invest in Syria.

He indicated that weak currencies such as the SYP, which are not supported by the central banks, are negatively affected. Besides, those banks do not have effective monetary policies to manage the size and growth of the money supply, manage inflation, or regulate the exchange rates between domestic and foreign currencies.

In an interview with Melody FM on 23 January, Samer Abu Ammar, an expert and economic researcher in finance and banking affairs, pointed out the need to withdraw the unfit banknotes of low value from circulation and introduce a new set of high-value banknotes in equal amounts. Printing new currency notes will increase the flow of money in the economy. And if the money supply increases faster than real output, inflation occurs. This is referred to as  “deficit financing.”

The CBS issued new banknotes of 5,000 SYP to be circulated in the markets, starting on 24 January.

The release of new banknotes occurred after talks that lasted for three years following a draft law in the People’s Council of Syria (PCS) in May 2018. The law stipulated the amendment of Article 16 of the law to allow the CBS to issue financial notes from 1,000 to 5,000 SYP.

According to a statement published by CBS on its official Facebook page two years ago, the bank printed 5,000 SYP banknotes in order to meet expectations of actual circulation needs of banknotes.

The bank justified the printing step as facilitating monetary transactions, reducing its costs, and its contribution to confronting the effects of inflation that occurred during the past years. They also said printing new banknotes reduced the need to deal in banknotes due to the high prices and the gradual disposal of damaged banknotes, especially since the wear and tear on banknotes have increased recently.

The new banknotes do not display the image of the head of the Syrian regime, Bashar al-Assad, unlike the 2,000 SYP banknote that was introduced in 2017. The 1,000-SYP note carried the image of the former president, Hafez al-Assad.

The CBS printed 2,000-pound banknotes in 2015, which went into circulation in the second half of 2017 when the bank sensed the market’s need for this category. By following the market, CBS addressed its need for all banknotes, according to a statement released by the CBS at that time.