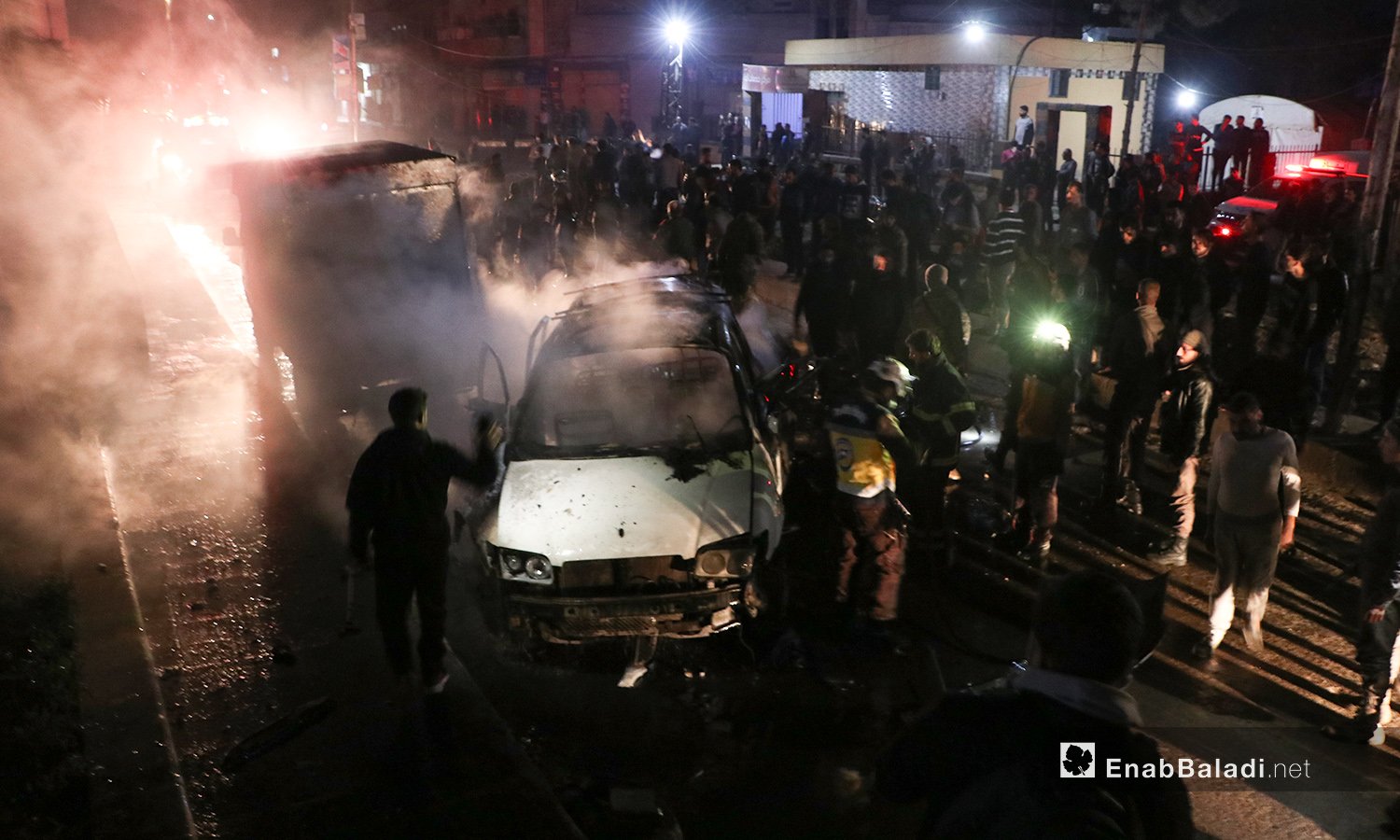 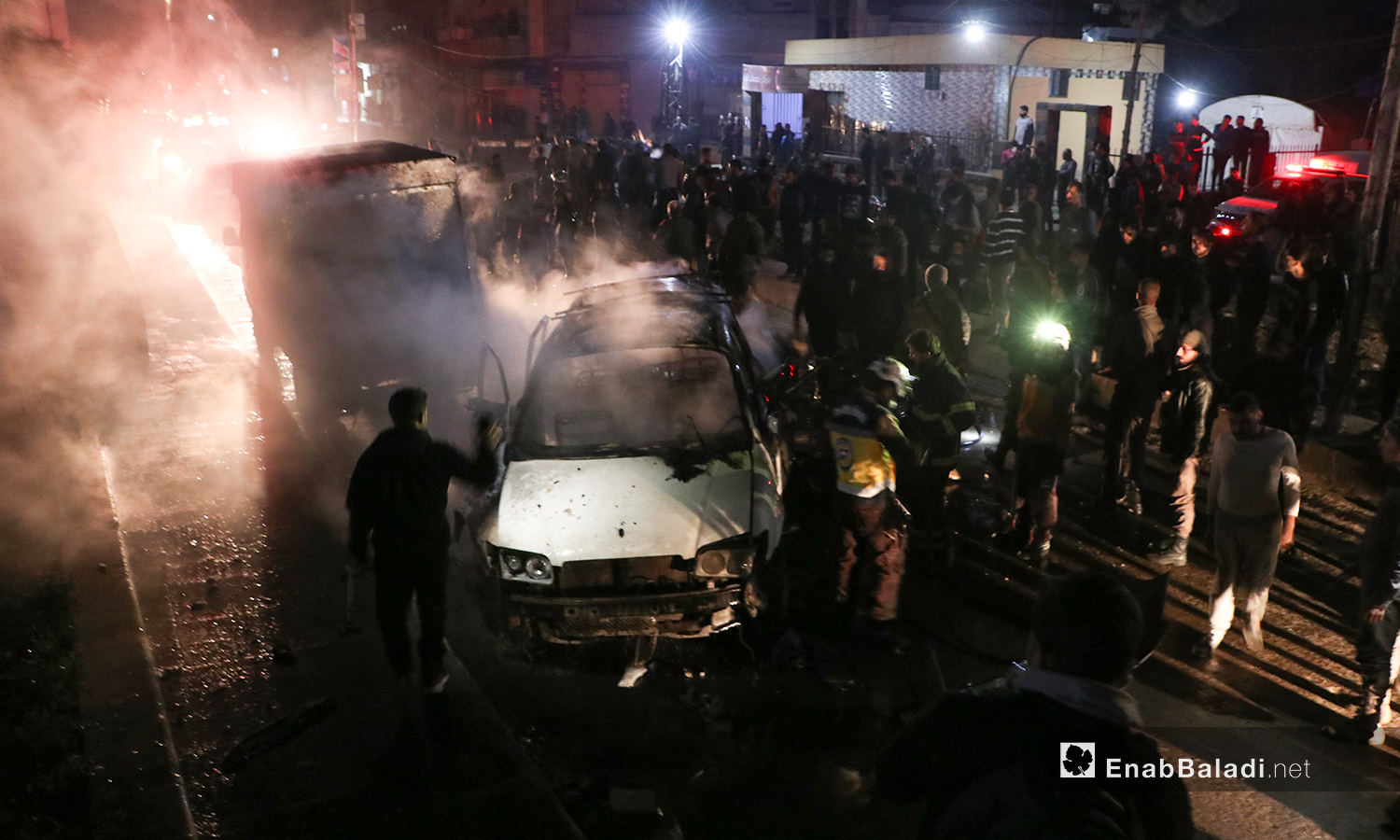 Mahmoud Zuaiter, a 35-year-old store owner in the town of al-Dana, north of Idlib, cannot visit the city of al-Bab as much as he used to before January due to the deteriorating security situation. Killings, explosions, kidnappings, looting operations, and armed clashes between different parties have recently intensified in the region.

Zuaiter regularly goes to the al-Hal wholesale market in the city of al-Bab, northeast of Aleppo, in order to purchase products, which are not available in the northern part of Idlib and sell them in his small shop.

“My shop is almost empty currently,” Zuaitar told Enab Baladi. This is because he is not going to the city of al-Bab to purchase his products nowadays. He is placing his order over the phone. Then, wholesalers come to the town and distribute goods to him and other retailers, who have already requested the necessary goods over the phone.

Abdo al-Hamoud, a 46-year-old wholesaler of foodstuffs in al-Bab, said that most of his customers from the rural areas stopped coming to his store due to the declining security situation, mainly because of the explosions targeting markets and places where civilians gather. He added that “people are dying in vain.”

Al-Hamoud told Enab Baladi that he had to buy a car to transport his products to his clients in the rural areas, which incurred high costs.

Moreover, the son of Abdo al-Hamoud has to deliver the products to retailers, which puts him in danger. He has to finish his work before nightfall. He indicated that business activities have dropped significantly in the city of al-Bab from where they were two months ago.

A member of the Chamber of Industry and Commerce in al-Bab, Ahmad Hamza, told Enab Baladi that most of the investors now prefer to enter into typical market projects in order to avoid the risk that the security situation has led to.

Investors would not take a risk to win or lose in projects which require sacrifices. Also, big investors do not even dare to go to northern Syria; even if they make some investments, they contribute money to small businesses. In fact, this does not build a strong economy but rather small individual projects that do not help the region to grow economically, according to Hamza.

Besides, most venture capitalists in Turkey and neighboring countries need some reassurances to carry out large projects. “This has something to do with the political reality around us,” Hamzah said.

Civilians, merchants, and shopkeepers that Enab Baladi met complained about the deteriorating security situation in al-Bab. They held the police forces, military factions, and the Turkish authorities responsible for the failure to secure the city.

An officer from al-Bab Security Directorate, speaking on the condition of anonymity with Enab Baladi, said the rebel-held areas experience severe security pressures during this period, which prevent investors from financing projects and working seriously in the region. He indicated that al-Bab city was the economic capital of rural Aleppo in the past. But in the meantime, al-Bab is the economic center of the areas under the control of the Syrian opposition.

According to the officer, it is not only the deteriorating security situation that affects al-Bab’s economy. There are other reasons, such as the absence of official crossings with the Syrian regime-controlled areas and the Syrian Democratic Forces (SDF) in northeastern Syria. This impedes the movement of trade exchange and slows down the economy.

The police have taken several measures to enhance security, including the designation of a square to inspect and exchange goods near the industrial zone in al-Bab; the police also ensure that no vehicles with bombs or explosive materials could enter the city.

The checkpoints have also been reinforced to curb “terrorist” attacks in the region, behind which “terrorist organizations” stand, to show the vulnerability of the local management in opposition areas, according to the officer.

On 7 February, the Ministry of Defence in the Syrian Interim Government (SIG) announced that it had taken a set of measures aimed at “maintaining stability and security” in the areas under its governance in northern Syria.

The measures also included lifting the necessary earth mounds and digging trenches in the required places, in addition to tightening guard and control.

The Ministry of Defence stated that it would conduct military police patrols, reinforced by some members of the Syrian National Army (SNA), inside cities, towns, and populated areas. Moreover, roadblocks and checkpoints within cities and towns, especially at the entrance and exit points, would be strengthened.

The ministry also called for “strengthening the role of the military justice system, and referring perpetrators of terrorist crimes, and anyone who has proven their cooperation with them, to military courts on charges of terrorism.”

The SIG requested citizens in the areas it administers to report to authorities any information about the parties or individuals that carry out these actions.

Commercial and agricultural importance of al-Bab

Al-Bab is located on the road linking the city of Aleppo and the cities of Raqqa and al-Hasakeh, passing through the strategic city of Manbij. This made the city of al-Bab a vital transportation node in northern Syria.

Al-Bab is called “the eastern gate of Aleppo.” Al-Bab is only 30 kilometers (18.6 miles) from the city of Aleppo and the same distance from the Turkish border.

Al-Bab is in the middle of a vast agricultural plain, which made it the food basket of northern Syria and the primary source of crops and animal products in the governorate of Aleppo.

Al-Bab has been famous for growing cotton. Al-Bab’s cotton is one of the finest Syrian cotton, which made it a primary source for the textile industry, for which the city of Aleppo is known.

The city of al-Bab alone has an area of ​​13 square kilometers (5 Square miles), the same size as the city of Idlib, and slightly larger than the city of Tartus on the Syrian coast. Al-Bab is the largest city in the governorate of Aleppo after the city center.

Abd al-Razzaq Abd al-Razzaq, the director of the civil status department in al-Bab, told Enab Baladi that nearly 82,752 persons live in the city center of al-Bab, in addition to 64,859 displaced persons according to the December 2019 census.

According to the Syrian Department of Statistics, the al-Bab population amounted to 146,000a, while the people of the al-Bab region, which includes al-Rai, Tadaf, Qabasin, and Bazaa, reached about 300,000.

Frequent explosions took the lives of many civilians

Over the past months, several explosions hit the opposition-held areas, which resulted in dozens of victims. Popular markets, as well as military figures in the region, were targeted. In addition, members of the security forces were killed during operations to dismantle IEDs.

A civilian was killed, and 13 others were injured in a car bomb explosion in the town of al-Rai, in the city of al-Bab, north of Aleppo, on 13 February.

On 4 February, the Turkish Ministry of Defence mourned one of its members in the city of al-Bab, northeast of Aleppo, Sgt. Süleyman Demirli.

Demirli was killed while defusing an explosive device.

On 2 February, one person was killed, and four others were injured in a truck bomb explosion in the New Industrial City on al-Rai road.

The largest explosion in al-Bab occurred on 6 October 2020. Nearly 19 people were killed, and 82 others were injured in a truck bomb in the back entrance to the main bus station in the city center. 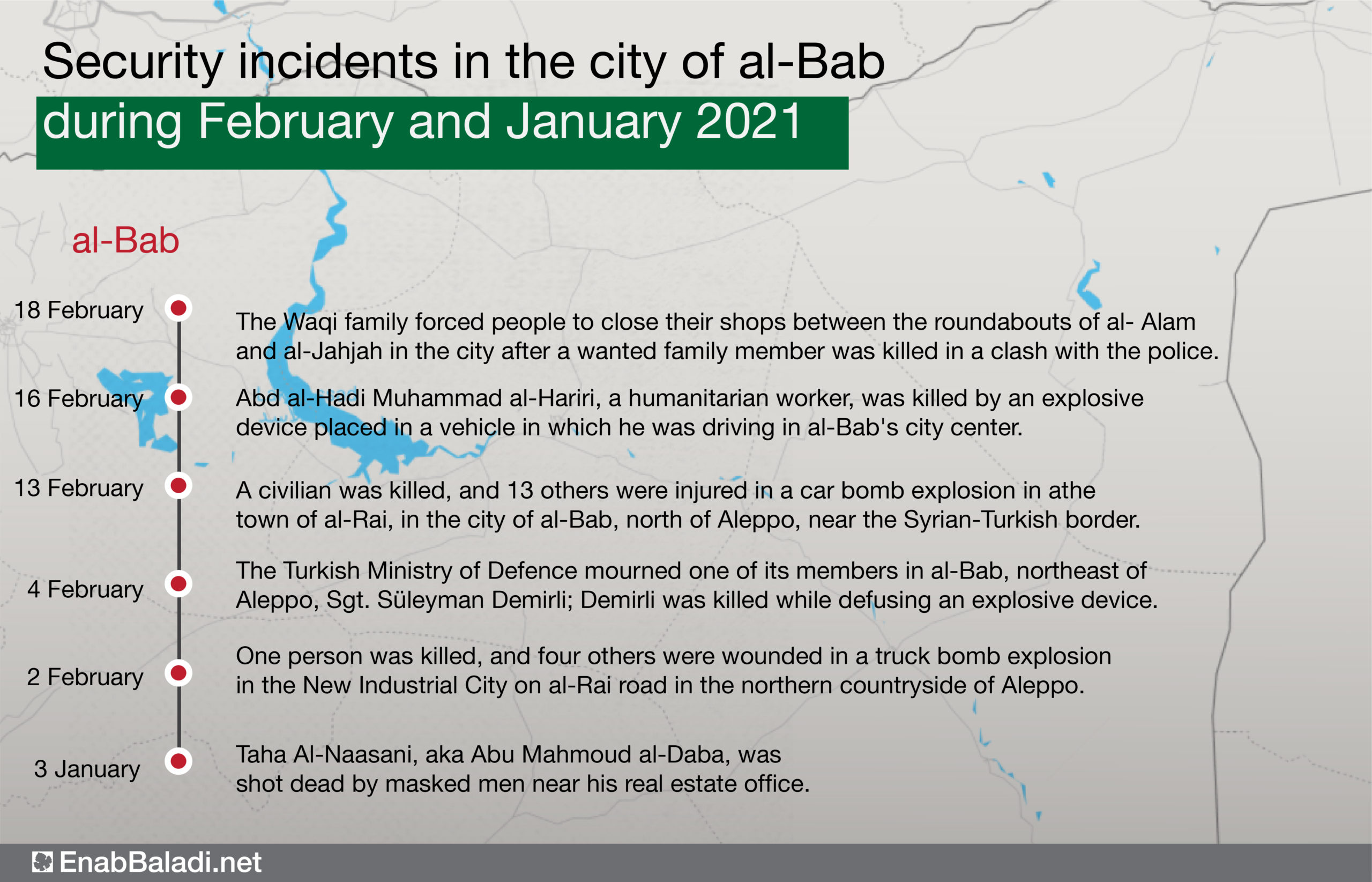 The correspondent of Enab Baladi in Al-Bab Asim Melhem contributed to preparing this article.