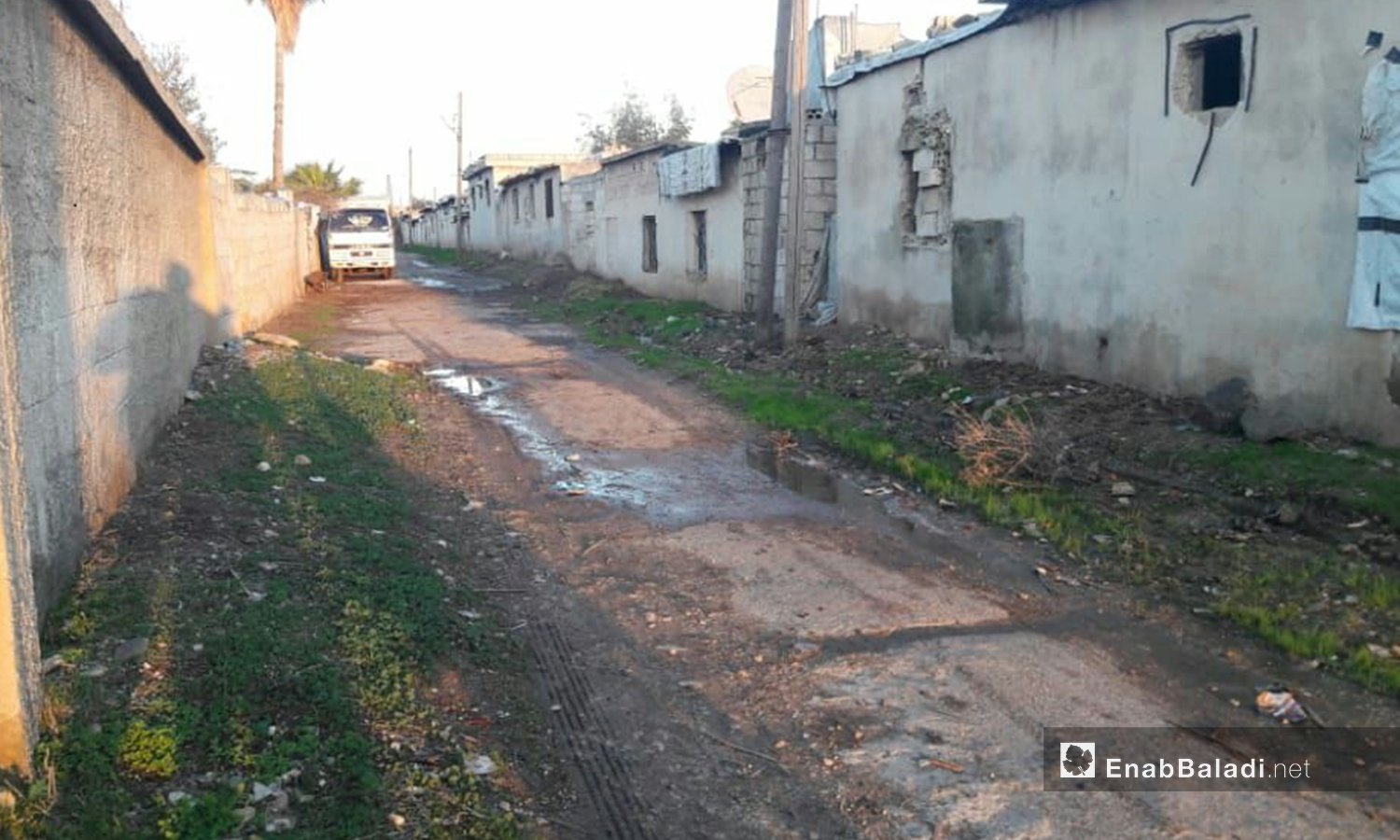 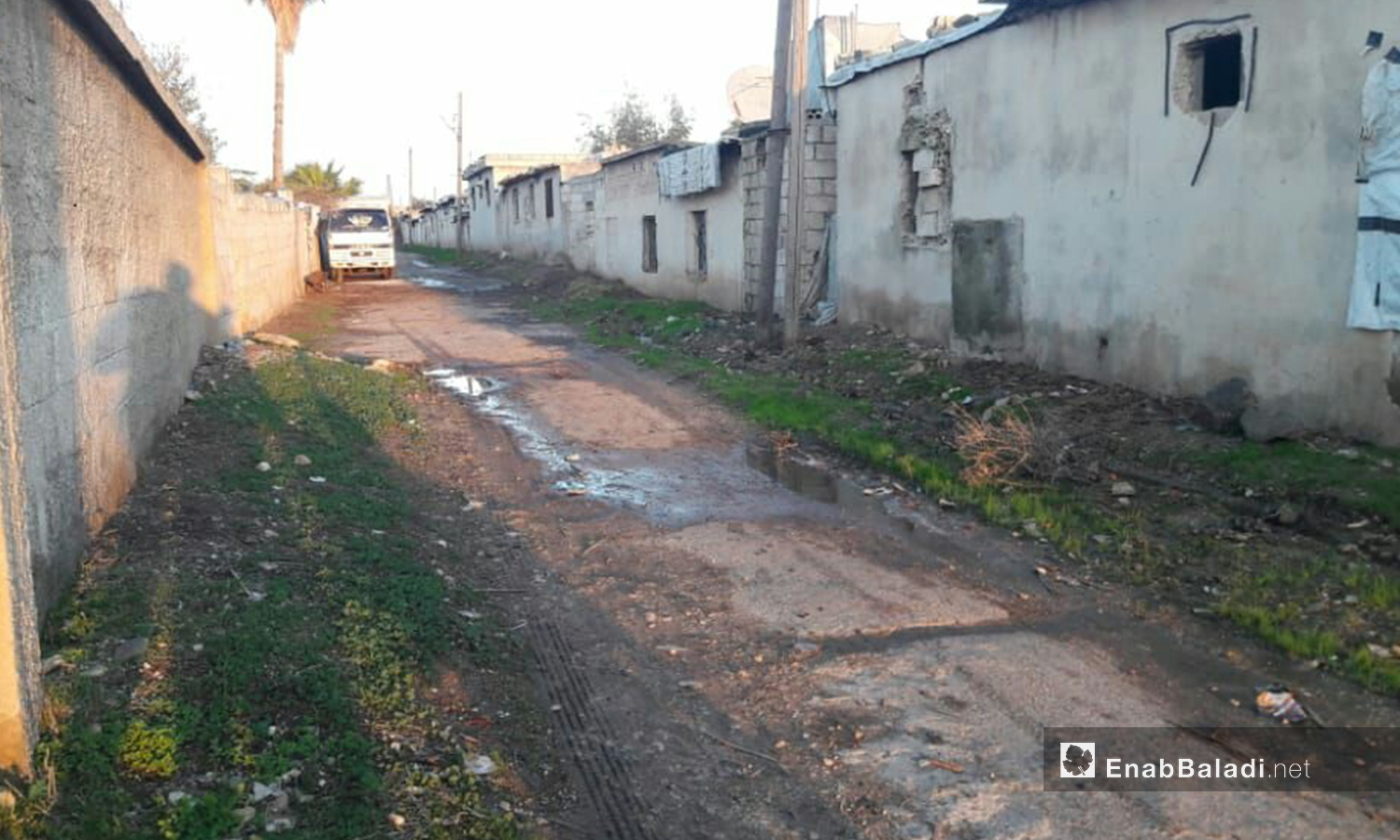 Tamam held his toddler, trying to keep him off the ground so that his clothes do not get stained with mud. The streets of Zayzoon camp, west of Daraa province, flooded with sewage water from closely built houses, swamping the area with the foul stench again.

The camp’s sewage problems have been tormenting residents for 10 years, unaddressed by humanitarian organizations, when the area was held by the opposition, or the local councils, which operate under the government of the Syrian regime.

A relic of the June War

Located west of the Zayzoon natural lake, the camp was set up to accommodate Syrians displaced from the Golan Heights during the June War in 1967, after Israel occupied an area of 1,260 km, including Qunietra province, forcing over 13,000 Syrians to abandon their homes.

The camp lies within the borders of Daraa province. However, administratively, it is run by the Qunietra Provincial Council, the reason why the camp is denied a wide range of services, including proper sewage systems.

Residents are not provided any services due to the camp’s location, as it is nowhere near the center of the province, Tamam told Enab Baladi.

The camp stretches over nearly 50 acres, consisting of tightly grouped clusters of houses, jammed with residents, who put up with the absent infrastructure.

The proposed solutions were always stopgap, added Tamam. Taking the matter into their own hands, camp residents dug holes in the ground; placed barrels there, and shut them tight. “The barrels then overflew and filled the streets with the sewage water.”

Tamam’s window overlooks the streets, but he keeps it shut. “It is the odor, I cannot even air my room. In summer, it gets worse with all the insects.”

The camp’s residents were hoping for better services as the Syrian regime forces retook the area in June 2018. But, two years into the so-called settlement agreement, the Quneitra Provincial Council took no measures to answer the camp’s needs.

When the opposition was in control of the area, activists failed to convince humanitarian organizations to implement sewage system projects in the camp, a former media activist told Enab Baladi, requesting that his name be withheld for security reasons.

“The camp’s population is at a risk,” the media activist said, adding that the situation is growing worse year by year.

“The camp was a makeshift shelter” for the people displaced from the Golan Heights, Abu Muhammad said, a resident of the Zayzoon village. “The state leased the land from farmers, and built houses of pumice-concrete brick, with PVC roofs.” These houses lack infrastructure and sewage networks.

“Their stay in the camp is temporary, people used to think,” Tamam said making coffee on an electric stove when power was back after long hours of rationing.

Some families resorted to pumper trucks to handle the sewer holes’ contents, but the high costs of the service, 15,000 Syrian Pounds (5 USD), prevented them from applying the procedure repeatedly, since the majority work on farms, or raise cattle, and all are suffering the repercussions of the economic crisis in Syria.

Today, sewage problems are creating further challenges for the camp’s population, as they pose more health risks under the COVID-19 pandemic, which so far hit 900 persons and rendered 40 others dead in Daraa province, according to government figures.

Tamam wears a mask and implements strict preventative measures. “We had to wear masks even before the spread of the pandemic, to fend off the unpleasant smells,” he said.