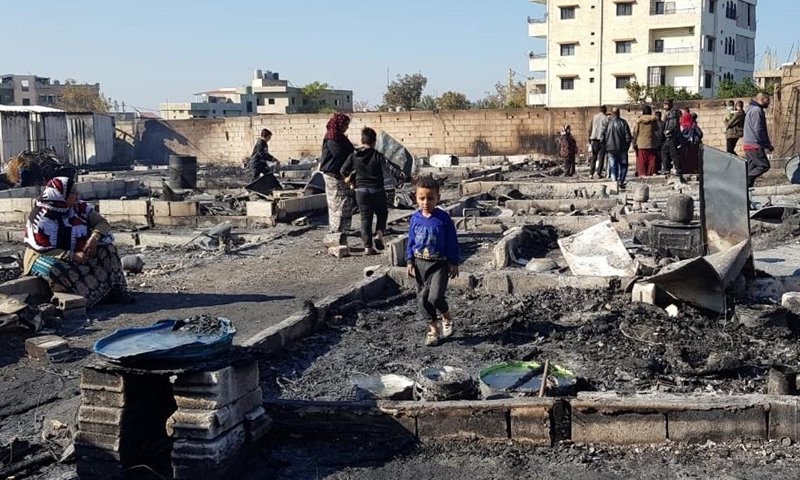 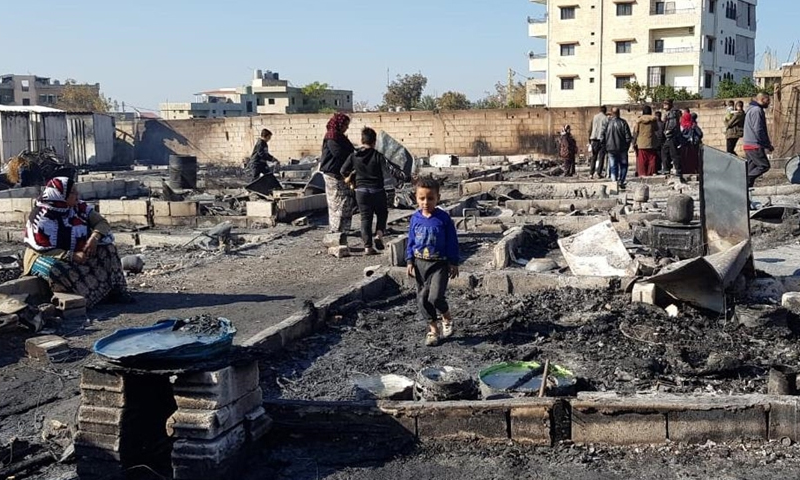 During the last years, Syrians abroad have witnessed many events on which the Syrian regime did not release an official comment; however, in the last few months, the regime did not remain silent regarding three incidents that befell Syrian refugees in Lebanon.

This raises questions about the regime’s intentions behind this interference, especially as it comes before and in conjunction with the Russian-sponsored conference on the return of Syrian refugees in Damascus, November 2020. The regime’s position also comes months before the Syrian presidential elections, which several parties called on Syrians abroad to participate in.

Differing positions by the Syrian government

In April 2020, the government of the Syrian regime kept silent about an incident where a Syrian refugee set himself on fire in Zahle district in Lebanon, driven by difficult material and economic conditions he has suffered since his arrival with his family as refugees to Lebanon.

The Syrian government also did not release any statement or condemn the Lebanese Supreme Defense Council’s decision in July 2019 to demolish cement housing units in the Arsal camps for Syrian refugees, on the pretext that they are violating the law and posing a security threat.

However, on 31 December 2020, the state-run Syrian Arab News Agency (SANA) said that the Syrian embassy in Lebanon had provided financial assistance to Syrian refugees affected by the Bhanine area refugee camp’s blaze in the Miniyeh region, northern Lebanon.

The camp was set on fire by a group of Lebanese people on 27 December 2020. The camp was burned completely following a fight that erupted between a Lebanese person and some Syrian workers in the camp.

SANA cited the Syrian Consul in Lebanon, Adnan Trabelsi, saying that “the doors of the embassy are open to those affected by the fire and they are welcome at any time,” stressing that “these people’s case is followed up with all concerned bodies, especially the Lebanese General Security.”

The financial aid came after an official source in the Syrian Ministry of Foreign Affairs and Expatriates condemned setting the camp on fire. He asked the Lebanese judiciary and the Lebanese authorities to take responsibility for the accident, secure protection for Syrians in Lebanon, and called on refugees to return to Syria.

The Syrian government’s financial aid also came after a statement by the Syrian regime’s ally, the Lebanese Hezbollah, which denounced the camp’s burning and described what happened as “a crime against innocent Syrian citizens.”

The Syrian regime’s comment on the recent incident against Syrians in Lebanon, and its call for them to return to their country, was not the first in the last months. The Syrian Ministry of Foreign Affairs offered its condolences to a Lebanese citizen’s family in the Lebanese town of Bushri, who was killed by a Syrian man in November 2020. This incident forced about 270 Syrian families to leave the town for fear of retaliatory acts against them.

The Syrian Ministry of Foreign Affairs called on the relevant Lebanese judiciary to follow up the case and limit incitement against Syrians. It also demanded the Lebanese authorities to prevent the use of this accident to abuse refugees and protect them.

The Syrian embassy in Lebanon also followed up a mass rape incident of a 13-year-old Syrian child from a Lebanese mother in the town of Sohmor in the Beqaa Valley of Lebanon, which was brought to public by the Lebanese authorities in July 2020.

Syrian ambassador to Lebanon, Ali Abdul Karim, said at that time that this child rape case is old and has been released with ulterior motives, describing it as “horrible and provocative for all Syrians and viewers.” He added that the Syrian embassy hired a lawyer to follow the case, indicating that the Lebanese judiciary was cooperative and detained some persons.

Syrian regime tries to win over refugees by relying on Russia

The conference on Syrian refugees’ return to their country was held for two successive days in Damascus under Russian invitation and sponsorship in November 2020. Countries hosting Syrian refugees were absent from the conference except for Lebanon and Iraq. Besides, countries of key influential roles in the Syrian file also missed the conference.

Through the conference, the Syrian regime confirmed the continuation of efforts to secure the refugees’ return and to provide them with “decent living conditions,” which Russia had included in its conference proposals to the United States in 2018. These proposals included the organization of work for the return of Syrian refugees and forming a joint group to finance the reconstruction of Syria’s infrastructure.

The conference coincided with talks about the coming presidential elections in Syria, and its preparations, which should be held according to the election law between 16 April and 16 May 2021.

According to political analyst Ahmed Mazhar Sado, Russia described the refugees’ return conference as successful, but the conference failed as expected. He added that no one in the international community, especially the US administration and the European Union (EU), could be convinced of any serious role for reconstruction and the return of refugees under the Syrian regime, as it continues to evade any serious negotiations leading to a political transition, as stated in United Nations (UN) resolutions.

The refugee conference was held amid a western boycott, especially from the United States and the European Union. The EU said in a statement that the conference is premature, stressing that the priority at the present time is to take real measures to create suitable conditions for a safe, voluntary, dignified, and sustainable return of refugees and internally displaced persons to their areas of origin.

The EU stated that while the return decision must always be an individual decision, conditions in Syria, for the time being, do not encourage a large-scale voluntary return in safe and dignified conditions consistent with international law.

The EU statement added that the limited returns illustrated many of the obstacles and threats still facing the return of displaced persons and refugees, in particular forced recruitment, arbitrary detention, enforced disappearance, torture, physical and sexual violence, discrimination in acquiring housing, land and property rights, as well as the lack or absence of essential services.

Sado told Enab Baladi that the Syrian regime has relied on Russian support, thinking that this would save it from the Caesar Act results. He added that the regime continues to detain Syrian refugees returning from Lebanon sometimes and from Jordan less frequently.

Russian approval and support to the Syrian regime’s rehabilitation and presidential elections in the coming months are pushing it to do all it can to build some trust with Syrian refugees in Lebanon, under the dominance of its supporters and allies from Hezbollah and the Free Patriotic Movement.

According to Sado, the regime’s declaration of sympathy for the Syrian refugees in north Lebanon after the burning of their camp may fall into the context of manipulation to win over some people. The regime employs these positions for the coming elections that became a reality after the Russian approval and international silence for all his crimes.

Syrian people and refugees, in particular, realize that the Syrian regime cannot be trusted and that the coming presidential elections will necessarily and, according to indications, be a repetition of its previous elections, according to Sado.

Sado believes that the regime’s endeavor to win over refugees will never succeed and that all attempts by the regime will not resonate among the Syrian people.

As per Sado’s words, the false Syrian media cannot change the Syrian public opinion through its foreign ministry’s statements and propaganda. The regime has killed about 1 million people and detained more than 500,000 persons. These unjust detention cases continue to this day on the regime’s checkpoints.

According to the Lebanese General Directorate of General Security, more than one thousand refugees returned to Syria on 26 December 2020, under Lebanon’s joint plan with the Syrian regime to return refugees.

Lebanon’s National News Agency (NNA) has reported that 1,131 Syrian refugees have returned to their country. It said that the Lebanese General Security ensured the refugees’ voluntary repatriation through the centers of al-Masnaa, al-Qaa, and al-Ubudiyah on the Syrian-Turkish borders, in coordination with the United Nations High Commissioner for Refugees (UNHCR). The Syrian regime transported the returning refugees in buses from designated gathering points in Beirut, al-Masnaa, Tripoli, al-Ubudiyah, al-Nabatieh, Bourj Hammoud, Hasbaya, Sidon, and al-Qaa.

However, these figures do not match the numbers mentioned by the regime’s propaganda on Syrian refugees returning home from Lebanon. Only a small percentage of registered Syrian refugees in Lebanon, whose number reaches about one million, according to the estimations of the UNHCR, are returning to Syria.