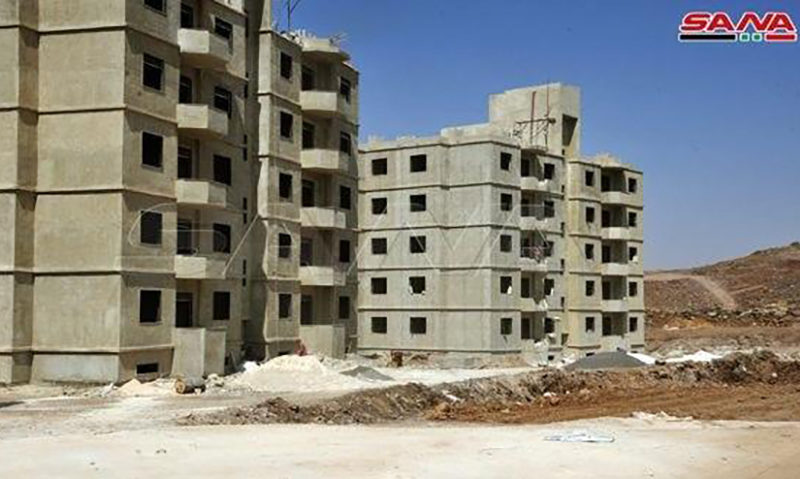 The Director-General of the Syrian General Housing Establishment (GHE) has talked about delays in the delivery of housing units to the subscribers of alternative housing projects. He said that subscribers are not entitled to hold the establishment accountable for the delay.

The official, Ayman Mutlaq, stated to the al-Madina FM local radio station that subscribers whose alternative housing units have not been delivered yet are not entitled to pursue or take any legal action against the GHE.

Mutlaq attributed the main reason for the delay to the ongoing conflict in Syria; however, he added that there are other reasons for the delay in handing over housing projects in regard to land, implementation, and studies.

He pointed out that the housing units’ allocation process has several stages. The owners are assigned serial numbers and must accordingly choose their units on specific dates, in the presence of a special committee. The housing units are delivered upon the completion of property documents and after the signing of the contract, once the subscriber is cleared from all matters.

According to Mutlaq, the alternative housing projects in the eastern region, Quneitra, and some governorates are completely suspended. He noted that some areas started the implementation phase late due to the unavailability of land for the project. He also talked about other areas where land was available but not under the name of the GHE.

Only forty percent of the housing units were handed over, while about 80 percent were supposed to be delivered, according to Mutlaq. He said the delay is due to the increase in implementation costs during the last years, in addition to other reasons linked to the GHE.

The GHE has allocated housing units to subscribers of its projects in a number of Syrian governorates, calling on individuals to visit its branches to review their applications.

The GHE called on eligible subscribers to visit its branches and the supervising bodies in the concerned governorates to review the nominal tables, the construction schedules, and the dates of the public distribution sessions for choosing housing units, which started on 27 December 2020.

On 20 November 2020, the GHE decided to extend the deadline for subscribers who defaulted on their monthly installments until the end of 2020.

Mutlaq pointed out that the establishment’s Board of Directors decided not to cancel the workers’ housing project’s subscriptions for those who defaulted on their monthly installments for less than three consecutive years. The board would also keep the subscription of those who did not pay their monthly installments for a period of less than two consecutive years for the rest of the establishment’s projects.

Syria’s housing sector faces several difficulties, particularly with regard to youth housing projects. These subscriptions started before 2002 and were delayed due to the repercussions of the security situation in Syria.

The GHE’s youth housing project, launched in 2002, attracted more than 120,000 applicants, according to the establishment’s statistics. All of the applicants were accepted.

Some subscribers received their housing units, while others who were supposed to receive them in 2016 did not.