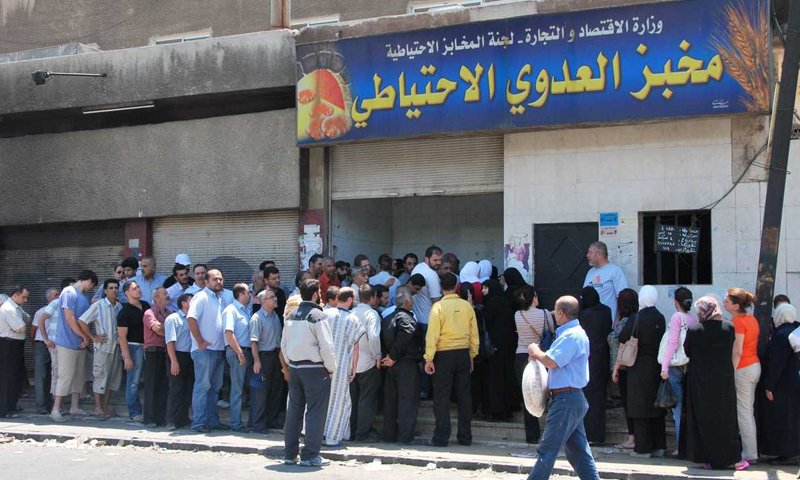 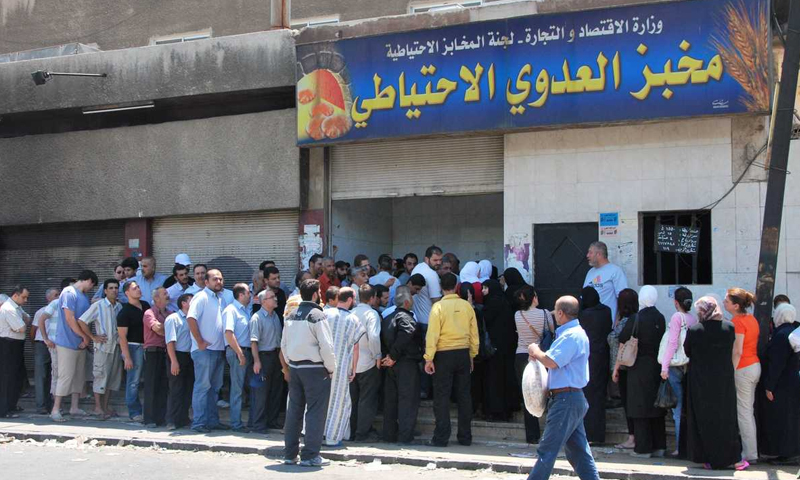 The Syrian budget has increased by billions of Syrian pounds over the previous year, as it has since 2011. But its US dollar value shows the opposite, as it coincides with a growing deficit, an increasing inflation, and fears of a contraction in the 2021 budget.

The head of the Syrian government, Bashar al-Assad, approved the general budget for the fiscal year 2021 at 8,500 billion Syrian pounds (SYP), an increase of 4,500 billion SYP over the previous year’s. This increase in the budget’s allocation has become recurrent since 2011. In fact, Budget 2021 seems to be bigger than the preceding one. Nonetheless, the actual value of the allocation shows precisely the opposite.

The accelerating inflation rate and the depreciation of the Syrian currency that took place after 2011 make comparisons with previous years meaningless. The value of the 2021 budget does not exceed 2.9 billion USD, at an exchange rate of 2,850 SYP against one USD, according to the Syrian Pound Today (a Syrian Pound tracking website). This is nearly half of the 2020 budget, which amounted to 5.7 billion USD, at an exchange rate of 700 SYP to one USD. (This was the black market exchange rate in November 2019, the month the budget was drawn up, which decreased at the end of the same month to reach 775 SYP per USD.) This will result in a contraction of the 2021 budget and an increase in the inflation rate.

In an interview with Enab Baladi, political economist Yahya al-Sayed Omar explained that the 2021 budget will place additional austerity measures on Syrians in the Syrian regime-controlled areas.

According to the logic and mathematical calculations, it can be concluded, “the burden of living costs on Syrian people will increase by no less than 65 percent if the value of the SYP against the USD remains stable and does not deteriorate again,” according to the comparison between the 2020 and 2021 budget.

In light of this budget, according to researcher Yahya al-Sayed Omar, it is expected that “the Syrian economic crisis will deepen. The crisis has devastating consequences; people will encounter difficulty securing basic items such as bread, fuel, electricity, and others.”

Despite the magnitude of these figures, their value is low in US dollars. The previous financial allocations do not reflect the needs of the market. It is worth mentioning that the Syrian government’s bill for imported wheat is 400 million USD annually, equivalent to 1,200 billion SYP. Meanwhile, the funds allocated in the budget is 700 billion SYP. Consequently, according to the researcher, there will be a decrease in the amount of bread, accompanied by very long breadlines.

The budget is spent in two fundamental frameworks: operating budget and investment budget. The operating budget is the continued funding of the state ministries and their sectors. Examples of this type of budget include salaries, pensions, expenses for each ministry, administrative expenses, wages, and transfer expenditures, such as maintaining state property. As for the investment budget, this includes each ministry’s investment plans to expand its work, such as establishing vital infrastructure and facilities.

The Syrian budget focuses on expenditures while there appears to have been an outright decline in investments. The share of investments did not exceed 18 percent, compared to 82 percent in current spending. This reflects the Syrian government’s inability to meet the main needs of Syrians in its areas of control,” according to al-Sayed Omar.

Prices in the Syrian regime-controlled areas have increased repeatedly since the beginning of 2020, coinciding with the SYP’s devaluation against foreign currencies. This is the result of several factors: economic sanctions imposed on Syria, especially the US Caesar Act sanctions, the adverse impacts of the Lebanese economic crisis and Beirut’s port explosion on Lebanese banks, which were an economic outlet for the Syrian regime, and the impact of the novel coronavirus (COVID-19), according to the opinions of researchers whom Enab Baladi met earlier.

The Acting Assistant Secretary-General for Humanitarian Affairs and Deputy Emergency Relief Coordinator in the United Nations Office for the Coordination of Humanitarian Affairs (OCHA), Ramesh Rajasingham, said: 9.3 million Syrians are now food insecure. This is an increase of 1.4 million over the year 2019, and the number is likely to increase, he noted in his speech to the Security Council on Syria on 25 November 2020.

Syria tops the list of the poorest countries in the world. 90 percent of Syrians live below the poverty line, according to the representative of the World Health Organization (WHO) in Syria, Akjemal Magtymova.

The United Nations World Food Program (WFP) spokesperson, Elizabeth Byers, warned of an unprecedented food crisis in Syria due to the coronavirus outbreak.

The Syrian government’s spending on citizens in the areas under its control should be three times less on its citizens in 2021 than it did in 2010, given that half of Syria’s population does not live under its control. According to a study conducted by the Atlantic Council, nearly 11.7 million people reside in the Syrian regime-controlled areas this year, compared to 21.4 million people in 2010.

The study also indicates that Syria will need to focus on ensuring the minimum standards of living for its population in light of the economic crisis gripping the country. The government will have to make great efforts to cover the population’s basic needs in its areas of control.

The current spending mainly serves social support programs, such as fuel and food subsidies, and wages for public sector employees, who make up about a third of the workforce (1.6 million people).

An assessment conducted by the local economic newspaper Kassioun estimated that the average living expenses for a Syrian family increased by 85 percent from the beginning of 2020 to September of the same year. To have a comfortable living standard, a Syrian family needs 660,000 SYP (220 USD) per month.

Contraction is the theme of the 2021 budget

“Contraction is the broad theme of the Syrian regime’s current budget,” researcher Yahya al-Sayed Omar said. Even though the budget is enormous in SYP, it is “a contracted budget” when adjusted in USD. This contracted budget is due to the decline in government revenues. Besides, most sectors have seen a significant decline, most prominently the oil sector.

According to a study by the Omran Center for Strategic Studies, the industry index decreased between 2010 and 2016 from 89 to 7 percent in the extractive industries and manufacturing industries.

Syria’s ability to produce its food has declined dramatically, including most prominently wheat, a strategic crop that is the main ingredient in the baking industry. Wheat production declined despite the good rainy season in 2019 and the cultivation of 1.26 million hectares. It is nearly three-quarters of the cultivated area in 2010. Production reached 2,170 million tons of wheat, which represents half of the 2011 production. The production was lowest in 2018; 1,199 million tons of the 642,000 hectares were harvested only. This is the lowest production in 29 years, according to the study.

Syrian export revenues also declined. Syria’s total exports plunged from 8.7 billion USD in 2011 to less than 700 million USD. Furthermore, the contribution of agriculture to government revenues diminished from 20 percent to 5 percent. Livestock production decreased by 35 percent and poultry by 40 percent. The tax revenues dropped from 9.6 percent to 3 percent. Export revenues from tourism also fell from 8.21 billion USD to 14 million USD.

According to al-Sayed Omar, the decreasing government revenues have an immediate negative impact on the budget, which in turn will adversely affect individuals.

The Syrian government’s spending has recorded a sharp decline, which means more austerity for Syrians, especially since, in the foreseeable future, no improvement in revenues is expected.

The severe inflation afflicting the Syrian regime’s economy was directly reflected in the budget. It saw a drastic increase in its value in the SYP and a marked decrease in its USD value, indicating that the high inflation level will dictate the economy. Thus, the value of salaries and wages will continue to decrease, which will adversely affect Syrians’ livelihood, according to al-Sayed Omar.

It is expected that the prices will continue to accelerate in light of the new budget because it is a contracted budget in the first place; its value in USD is less than the financial dues required to secure basic materials.

Despite its low USD value, the current budget is anticipated to experience a further decline due to the SYP instability. The SYP is likely to deteriorate under internationally imposed economic sanctions further. This means an additional decrease in the actual value of the Syrian currency against USD, and thus a decline in the standard of living of Syrians, according to al-Sayed Omar.