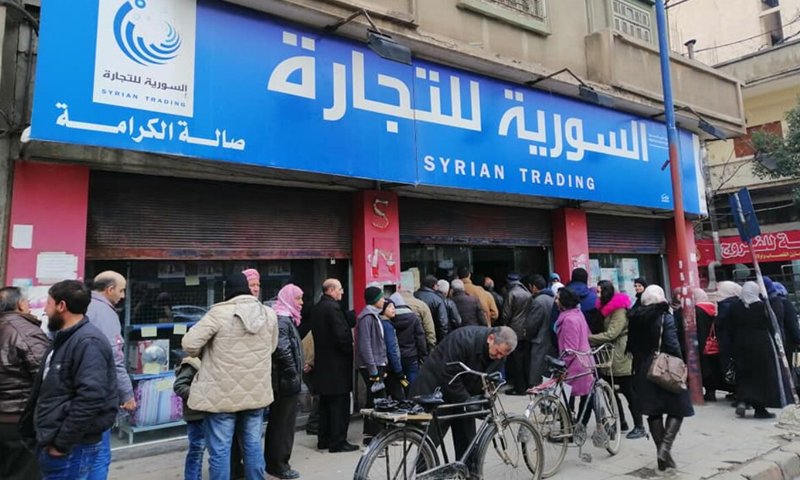 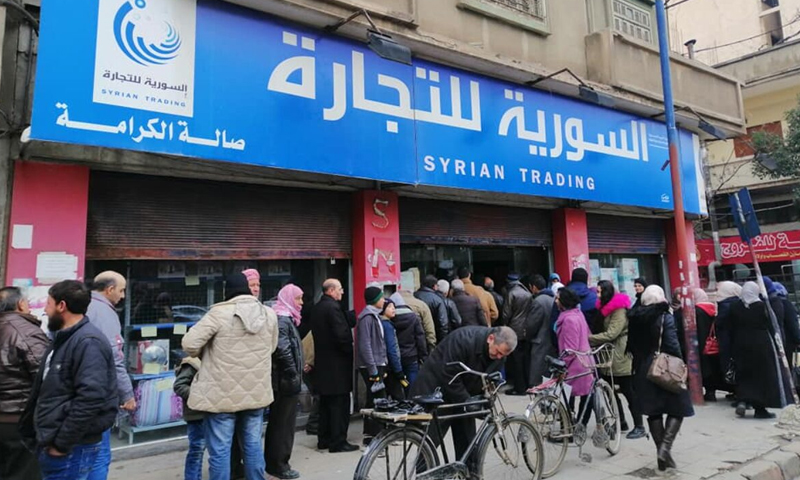 Recently, social media networks have been buzzing with the Syrian Trade Establishment (STE) name, which is linked to the Syrian government.

Social media users, including merchants and citizens, have been complaining and criticizing the STE’s work and procedures.

The latest wave of criticism occurred in Damascus on  13 December 2020, when the Butchers’ Association demanded that the prices of meat be raised in the butcher shops to match the increase in meat prices sold at the stores of the Ministry of Internal Trade-linked STE.

The head of the Butcher’s Association, Edmund Qutaish, said that “butchers should be treated fairly. The prices of meat sold at their shops should be raised due to the current economic crisis. This should happen especially since the meat prices at the STE stores exceed the meat prices sold in private butcher shops,” reported the pro-government newspaper al-Watan.

Qutaish clarified that the butcher is allowed to sell a kilo of lamb at nine thousand Syrian Pounds (SYP- 3.1 USD), while it is sold at the STE stores for about 13 thousand SYP (4.4 USD).

The STE has only five stores for selling meat in Damascus, Latakia, Hama, Aleppo, and Homs, according to the General Director of the STE, Ahmad Najm.

Najm added that the STE-linked stores have come to control more than 60 percent of the meat market in Damascus.

The STE is not an emerging establishment; it has provided its services for a long time through large outlets. It also has a wide customer base. Its reputation has spread wide and far in recent times as an irreplaceable solution for citizens due to the displacement of merchants, high prices, and missing materials.

He explained that the Syrian regime is fighting merchants (human capital) and the material resources they represent, developing the role of the STE, if not granting it exclusive powers, instead of promoting competitive trade and attracting more merchants.”

He continued, “This makes the service itself bad. It leads to monopolization by the state. Within the current capabilities, it will not be possible  to meet the needs of citizens.”

On 6 December 2020, al-Watan said that the Ministries of Agriculture and Industry and other public bodies refuse to take spoiled tea provided by the STE. The STE imported 2,000 tons of Iranian tea that had gone bad.

At the time, Najm explained that “the tea is imported through the credit line. We do not know if its price has been paid or not, amid the government’s efforts to sell it and achieve a return instead of losing its price.”

Najm added that the tea has been imported since 2013. The official authorities have investigated the case dozens of times without finding out who is responsible. “There is no information whether or not someone has been held accountable for importing this spoiled shipment,” Najm said.

It is not the first time that the STE announced the sale of spoiled materials.  In July 2020, the STE branch in Homs announced an auction for the sale of about 175 tons of expired materials, including tea.

Tarkawi indicated that corruption is at the core of government’s work. The Syrian government only cares to provide a pro forma service. Tarkawi indicated that those involved import the worst types of goods and neglect health control methods when importing, in addition to transportation and storage problems that also contribute to the deterioration of goods.

The effects of STE domination go beyond economy. The STE now has adversely affected the social interaction between the citizens and the state employee. The phenomenon of the employee “Madam Faten” is evidence of the monopolistic policy adopted by the STE and its unfair acts of price manipulation.

Madam Faten is an employee who refused to do her job within the official working hours; she refused to process the papers of an old citizen who was trying to obtain his subsidized food.

In an interview with Enab Baladi, economic analyst Dr. Firas Shaabo said that he believes that restricting the foodstuff sector’s work to this establishment will lead to monopoly and a decrease in supply due to the absence of large sales outlets and the lack of goods. This, subsequently, will deepen the crisis of long queues.

Shaabo pointed out that the Syrian regime has taken a toll on all sectors, for example, through the use of the “smart card” that generates millions of SYP.

Shaabo stressed that what the STE does is much greater than that card. “It dominates the food sector, the most vital sector in the country, and thus the importation of any food products.” He indicated that some people working in the STE use their positions for personal gain with impunity.

A move toward privatization

Since the outbreak of the Syrian revolution, the Syrian regime has no longer been able to finance basic needs and maintain foreign currency reserves for import. Therefore, the Syrian government resorts to restricting commercial activities to the STE.

Shaabu told Enab Baladi about a conversation between himself and a finance minister (Shaabo did not mention the minister’s name). They pointed out that there are plans to privatize the STE because the STE’s real estate costs were higher than its earnings.

The objectives of privatization are to improve economic efficiency, manage funds within the state, and reduce the burden on the general budget with regard to the support provided by the state to public companies, including compensation for their losses.

Shaabo explained that the STE purchases materials at the exchange rate of the Syrian Central Bank (SCB). Then, the STE sells the materials to the citizens at much higher prices.

He indicated that the STE sells part of these materials in the establishment’s sale outlets. He noted that “this part represents the small part of the materials sold in the STE’s outlets and halls, while the major part goes to the markets and is sold at doubled prices,” Shaabo manifested.

Shaabo said, “in light of the widespread corruption tainting the state institutions, it is natural that expired or nearly expired goods are imported and sold into the Syrian markets. In this way, the state achieves a win-win by importing corrupted products. They gain material and moral benefits before the media outlets by claiming to meet citizens’ needs. But if the matter is revealed, the Syrian government can blame the individual bribe-takers.”

Another case of poor products

In September 2020, several Aleppo residents found weevils and moths inside the rice bags sold by the STE at a subsidized price through the “smart card system” to citizens.

The correspondent of Enab Baladi in the city of Aleppo at the time reported that many civilians, whom he interviewed in mid-November 2020, realized that their allocations of subsidized rice were expired. The rice was sold to livestock owners as fodder, while others refused to take their rice allocations. The portion of subsidized rice amounted to one kilo for each family member per month.