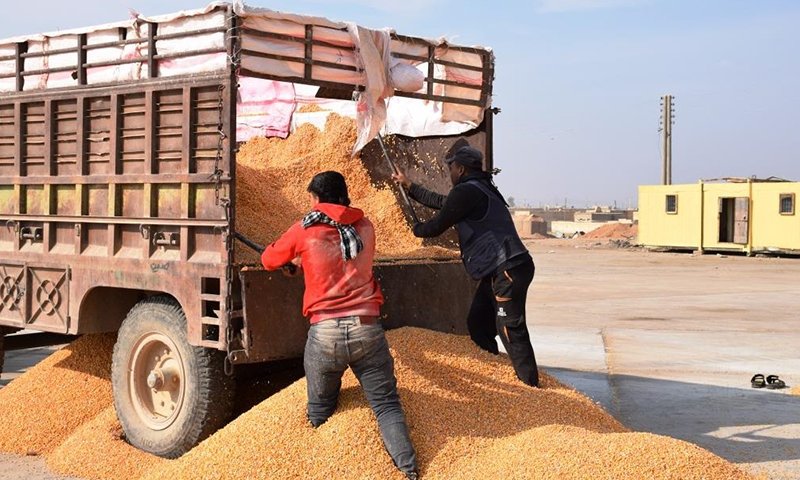 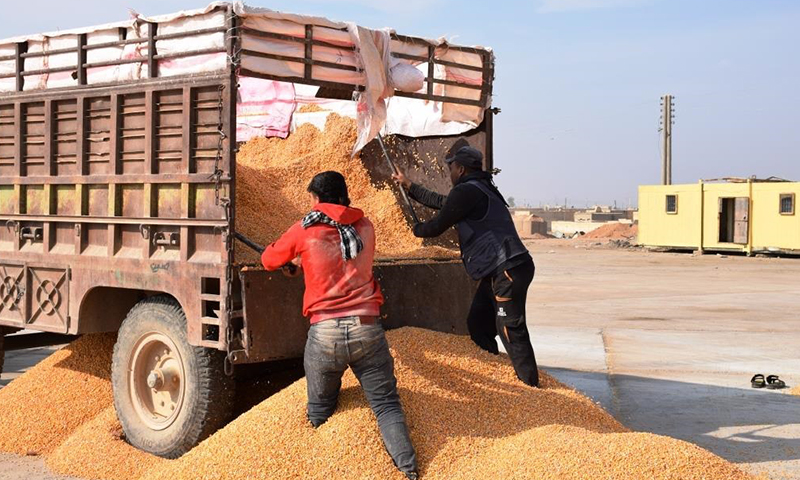 Muhammad al-Ali drove his truck loaded with his harvested corn crop to the maize drying center in the northern outskirts of the city of Raqqa to supply what his land produced after a season of high costs.

Al-Ali, a 50-year-old farmer from Hazima village in the northern countryside of Raqqa, paid the costs of seeds, fertilizers, and living wages to workers. Luckily, he got a “good” crop this year.

Al-Ali believes that utilizing “the corn drying center” is good for farmers. It alleviates the farmers’ burdens of using the traditional drying corn method (Leaving the corn in the open air to dry) and keeps them “somewhat” shielded from merchants’ monopolistic exploitation.

Factors influencing the prices of corn

The Kurdish-led Autonomous Administration of North and East Syria (NES) set a price of one kilogram of corn at 425 Syrian Pounds (SYP-0.14 USD). The NES allowed the farmers to charge different prices according to the grain’s purity and moisture content. The moisture content for corn may sometimes reach 35 percent, an administrative officer in the “maize drying center” said. (The administrative officer spoke on anonymity condition because he does not have permission to talk with Enab Baladi).

Abd al-Rahman al-Alou is a 40-year- old farmer. He grows maize in the western countryside of Raqqa. In an interview with Enab Baladi, he talked about maize cultivation, pointing out that cultivating one dunum of maize cost 170,000 SYP (59.5 USD) during the current season, including the combined costs associated with seeds, fertilizer, and irrigation. The corn crop ranges between 600 and 900 kilograms per dunum.

Regarding the corn supplying method, al-Alou said that corn is provided either to merchants or to “the maize drying center” of the Agriculture and Irrigation Committee of Raqqa’s Civil Council. He indicated that “the volatile” price, which ends at 425 SYP (0.1 USD) and is affected by the crop’s quality, is a burden on farmers.

The maize drying center is one of the crop distribution depots, and it has all types of automatic crop drying machines. This center had been out of service for seven years during the war. It was then rehabilitated to receive the farmers’ crops, store them, or supply them to the corn oil plants in al-Hasakah and Qamishli.

The maize drying center buys the maize crops from farmers at a price subject to assessing the crop’s quality. Traders insist on purchasing the dried corn kernels for 400 SYP (0.24) per kilogram.

Workers at the maize drying center examine the maize delivered by the farmer by determining the corn’s moisture level. The price is subsequently set by the Agricultural Development Company of the Raqqa Civil Council, which determines the value of the farmers’ crops.

The administrative officer indicated that the maize drying center, which receives 650 tons of corn per day, makes corn’s drying process easier for farmers. Farmers used to spread the corn on the roads and in public squares to dry it primitively in the sun.

Abd al-Rahman al-Alou complained about the corn price fluctuation. He said, “I have many farmer relatives. Everyone noted the variation in prices when handing their crops to the maize drying center. The price sometimes reached 350 SYP (1.2 USD) “under the pretext of corn crop’s moisture content or purity.”

The farmer added that the merchants in Raqqa do not abide by the price set by the NES. However, some farmers are forced to deal with merchants instead of dealing with the maize drying center to benefit from the express delivery services and to receive the crop’s value at the same time.

Sometimes bills issued by the maize drying center take a month. Al-Alou believes that merchants are taking advantage of the crop’s slow receipt to “manipulate the price” while refusing to buy corn unless it is dry.

Farmers supply the crop to the drying center, which then issues a “card of origin” that determines the date of receiving the corn; the process is coordinated with the “agricultural extension” units deployed in the countryside of Raqqa, according to the administrative officer. The officer confirmed the slow delivery process for corn “because the farmers do not deliver their corn crops on time.”

Enab Baladi monitored the views of some merchants of agricultural crops in the Makef market in the northern outskirts of Raqqa. The merchants denied that setting the price and requesting corn corps’ drying are an “exploitation” of the farmers. The merchant, Rajab Hindawi (aged 50 years), confirmed that these conditions “are consistent with the sharp decline in the SYP value.”

The corn crop ranks as the third most important agricultural crop in Raqqa, following wheat and cotton. The corn crop is used as poultry feed and is used in making pastries and different types of bread, as well as vegetable oil.

Corn is one of the short-season crops widely cultivated on irrigated lands. The period of cultivation ranges between three and four months, and its quality varies with the different types of agricultural soil. Raqqa lacks accurate statistics over the past period about the cultivated areas or even the amount of production.