Journalists launch campaigns against security chaos in northern Syria, would they leave an impact? 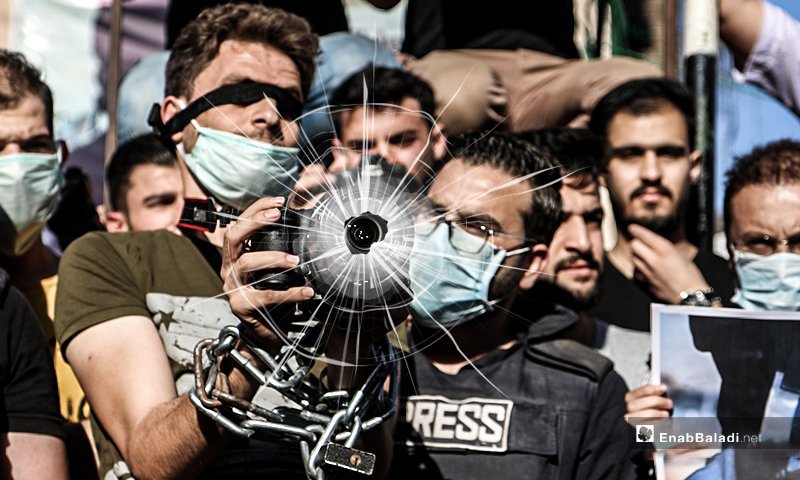 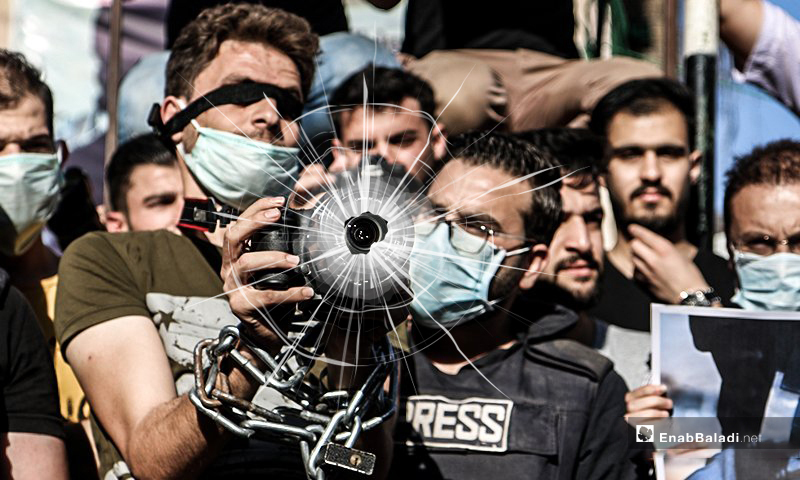 Several activists have edited their personal Facebook profile picture by adding to it a drawing of broken glass pierced by a bullet with a question saying, “Who is to blame?”

Syria’s northwestern areas, including Idlib and the northern countryside of Aleppo, lie under the control of many opposition military factions. These factions failed to establish security as news of bombings, explosions, and arrests are reported daily.

Several weeks later, Bahaa al-Halabi, a correspondent for Syria TV, a Turkey-based opposition media outlet, was also shot three times by unidentified gunmen as he was preparing to appear live on Syria TV channel on 6 January.

The “Who Is To Blame?” campaign was started by the al-Bab city activists on social media. It was preceded by the “Stop Killing Journalists” campaign, launched on 14 December 2020, which included sharing videos of activists condemning hostilities against journalists in opposition-held territories.

The activists launched another campaign entitled “Against Security Chaos.” They issued a statement blaming all parties in control for the deteriorating security situation.

Al-Halabi survived an assassination attempt and was celebrated by his colleagues after leaving the hospital better a few days later.

Al-Halabi does not know the perpetrators of his assassination attempt. He told Enab Baladi that the region’s security situation is “very bad” and that there is no “real intention” to control it.

Nevertheless, he expressed his belief in media campaigns’ role in pressuring the parties controlling the region to re-establish security.

“Media campaigns are messages meant for those inside Syria, not abroad,” media worker Ammar al-Fajj, who participated in the “Stop Killing Journalists” campaign, told Enab Baladi.

The lack of regard to journalists’ safety is the reason behind these explosions and assassinations, al-Fajj believes. “Journalists were targeted when the regime was in control, and then when the Islamic State (IS) took over the region. Today, journalists face many risks, the least of which is detention by the factions, if the journalist spoke against them.”

According to the al-Bab city-based media activist Ammar Nassar, the deterioration of the security situation in northern Aleppo countryside has reached a “pretty bad” point. He added that the civil police’s security mobilization in days following the assassination attempt of al-Halabi helped control security violations that are carried out on an almost daily basis.

“We have become accustomed to such violations against journalists, opponents, and activists of all fields, not just in the media,” Nassar said.

He pointed out that the standard procedures of the civil and military police and the controlling factions’ security offices are not enough to control the security situation, not to mention the lack of coordination between these entities.

Nassar highlighted the absence of the Turkish forces’ role in this regard. “We realize how strong the security situation is in Turkey; unfortunately, this is not maintained by Turkish forces in the liberated areas.”

The al-Bab city has become a scene for recurrent security violations, Nassar said. These violations vary between drive-by shootings by unidentified gunmen, attacks by improvised explosive devices (IEDs) that usually target factions’ commanders, or car bombings that cause the largest number of deaths and injuries.

According to Nassar, the ongoing smuggling activity between the areas of the opposition, the Syrian regime, and the Syrian Democratic Forces (SDF) is allowing the entrance of mines, IEDs, and booby traps. Besides, the insufficient inspection at security checkpoints, due to the lack of necessary equipment, hinders the detection of vehicles entering the city loaded with IEDs.

Furthermore, the lack of deterrence allows offenders to continue with their abuses. The death penalty is not applied against these murderers, who sometimes escape responsibility by bribing authorities.

In 2020, the northern Aleppo countryside areas witnessed 219 explosion incidents that killed 160 persons and wounded 608 others, according to the Syrian Civil Defence teams’ statistics.

Journalists are responsible for their safety

Several armed groups hold reins to power in Syria’s northwestern region, including the Turkish-backed Syrian National Army (SNA) in the northern countryside of Aleppo and the Hay’at Tahrir al-Sham (HTS) in Idlib province.

The SNA spokesperson, Captain Youssef Hamoud, told Enab Baladi that media agencies should protect their journalists, “as it is not the SNA’s responsibility to provide protection to each journalist.”

Journalists and civilians alike are suffering from the security chaos in the region; however, journalists are particularly targeted due to the nature of their work, Hamoud said. “A journalist is a constant critic of events, someone who dives into the unknown to expose information that puts him/her at risk of being targeted by any side affected by his/her findings.”

The controlling factions facilitate the work of journalists only. We believe that media workers are entitled to protection, which must be provided by their agencies, just as the factions are ensuring the safety of their media activists, Hamoud stated.

Enab Baladi contacted the HTS media office via email to discuss the current security situation and necessary measures to protect journalists but received no response at the time of reporting.

Why are journalists targeted?

A group of media activists and journalists were granted asylum in Europe with the help of the Syrian Center for Media and Freedom of Expression (SCM) and in coordination with Reporters Without Borders.

These media activists and journalists left northwestern Syria in December 2020 and ran into a torrent of public criticism, as to why should journalists be granted protection, but not the region’s regular residents.

In 2019, the regime, backed by its Russian ally, launched a military campaign on the northern Hama and southern Idlib countryside. At the beginning of the campaign, journalist Qusay Khateeb sought asylum in Germany.

“We would have been executed if the regime had caught us,” Khateeb said.

The Syrian regime was the only threat to Khateeb’s media work, especially after its advancement and control of Kafr Nubul city in February 2020. “Being granted asylum was like being pulled from the rubble. I was brought back to life,” Khateeb added.

Ibaa al-Mundhir, a journalist responsible for the SCM support department, told Enab Baladi that journalists in Syria are targeted for reporting news and violations on the ground in a professional way. She added, “The Greek dramatist Aeschylus once said, more than two thousand years ago, In war, truth is the first casualty.”

Al-Mundhir pointed out that media workers’ lives were at risk when the regime made advancements in Idlib’s southern countryside. Syria is one of the most dangerous countries for journalists, according to organizations involved in the promotion of freedom of opinion and expression.

Dozens of journalists were killed in Syria, either by assassinations, direct targeting by armed groups, or under torture in secret and public detention centers of the Syrian government under exceptional and unlawful provisions.

Threats to journalists’ lives are not limited to the regime and its allies, al-Suwaid said.

In June 2020, al-Suwaid participated in a campaign against the HTS’ attack on media workers while covering the joint Russian-Turkish patrols on the international highway (M4), linking Aleppo and Lattakia.

On the other hand, journalist Moataz Khattab thinks that poor journalism has contributed to increasing media workers’ risks. “Many of those working in this field practice journalism as an abstract work devoid of values. They use journalism as a tool to mobilize people against a particular idea. Revolutionary media can negatively impact the Syrian revolution due to the lack of professionalism, which puts some media workers in conflict with parties affected by their work.”

Journalists are always at risk, particularly those distinguished in their work, who are fearless in chaotic war situations, especially within the absence of effective security and judicial authorities and the existence of many conflicting parties. Assassinations spread panic and terrorize activists and those who come into contact with them from other community segments, Khattab said.

Campaigns with no coordination, what is the solution?

Khattab participated in the “Who Is To Blame?” campaign, which aimed at highlighting the security chaos in the al-Bab city. “I joined the campaign out of a religious, national and moral obligation towards the people of the city, displaced or locals,” Khattab told Enab Baladi.

According to Khattab, the most effective solution for establishing security is “to activate the retaliatory punishment against perpetrators found to be involved in killing incidents and those who have assisted them.” The next step is to “eradicate societal ills, including poverty and ignorance which drive some people to commit such crimes.”

Nassar did not participate in the “Against Security Chaos” campaign which went viral on social media because he did not know who initiated it, as it lacked coordination with the al-Bab city’s media activists. “Despite the importance of the cause and the need to unite efforts, we fear factional politicization behind such campaigns,” he said.

The establishment of a media association to organize journalists’ efforts and protect their rights is the first step to the solution, according to al-Suwaid. The media worker called on the Syrian Salvation Government (SSG) and the Syrian Interim Government (SIG) to ensure journalists’ protection and guarantee a free space for them to report the truth.

As for al-Mundhir, the solution lies in the de facto authorities’ acknowledgment of responsibility towards the safety of civilians living under their control, including media workers. These authorities should ensure the safety of journalists against all attacks triggered by the nature of their work. They should also pursue those responsible for assaults against media workers to safeguard freedom of opinion and expression in these areas.