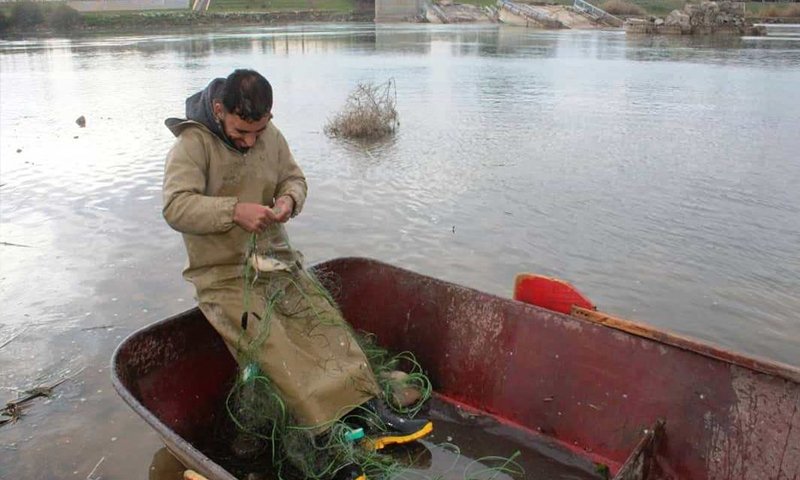 Fishing in the Euphrates River in Raqqa - 2018 (SDF Media Center) 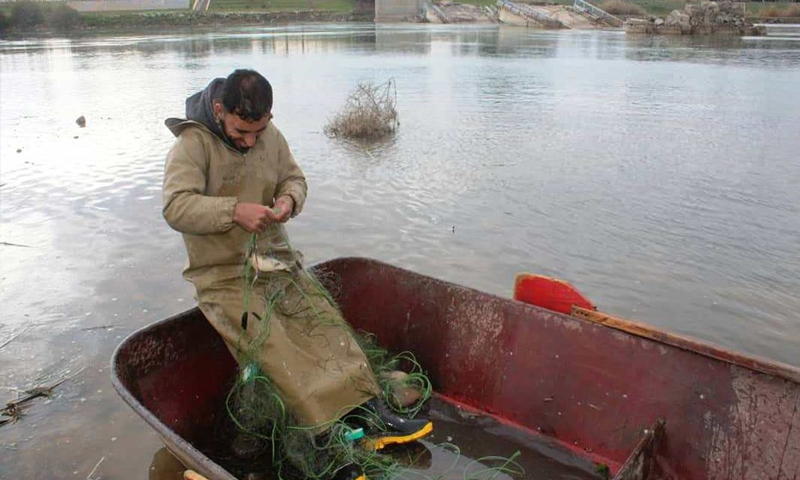 “On a boat in the middle of the Euphrates River, eastern Syria, an electrical wire attached to a generator dangles from a four-meter-long pole. The device is used to send an electrical current through the water to stun schools of fish, dozens of which are killed.”

Al-Salem, 35 years old, added that he knows that electric-pulse fishing is “wrong and illegal.” However, the traditional fishing method he has been using for 15 years is no longer sufficient to meet his family’s needs.

Al-Salem, who lives in the Ad-Diriyah neighborhood on the outskirts of the western city of Raqqa, inherited the fishing profession from his father. In his opinion, “overfishing” “is almost eliminating the fish wealth in the Euphrates River,” he told Enab Baladi.

Various fishing techniques, such as angling and netting, are “legal and harmless,” according to al-Salem, while electrofishing and blast or dynamite fishing, the so-called overfishing, are illegal.

Radwan al-Khidr ( aged 55 years) has practiced fishing for more than 30 years. Now, he is weaving fishing nets. Al-Khidr, in an interview with Enab Baladi, pointed out that overfishing poses a real threat to fish resources in the Euphrates River.

Al-Khidr filed several complaints against those committing fishing violations to the “concerned authorities.” Yet, the authorities remain deficient in halting such violations. Therefore, al-Khidr has to advise the fishermen in person. However, the fishermen meet his advice with sarcasm and abuse.

By contrast, al-Salem asserts that he would have quit fishing immediately if he had found another way to make a living other than fishing. “Yet, I have no other choice in light of these poor economic conditions gripping Raqqa,” al-Salem added.

Sympathy with the fishermen, not fish

The Euphrates River enters the Syrian lands from the city of Jarablus in the northern countryside of Aleppo. It exists from it at the city of al-Bukamal in the eastern countryside of Deir Ezzor. The river runs for about 700 kilometers (434.96 miles) within Syria’s border. The river that passes through the cities of Raqqa and Tabqa includes many types of fish: the biggest fish, “Percidae,” then “Carp,” “Characiformes,” “banded archerfish,” “Barbus,” “Mullet,” and even “Sardine.” All these types of fish begin to decrease because of overfishing, according to most of the fishermen whom Enab Baladi spoke with.

A member at the Fisheries Protection Office (FPO) in the Agriculture and Irrigation Committee of Raqqa’s Civil Council, who asked not to mention his name because he does not have a permit to speak to Enab Baladi, stressed that the FPO “strives fully to eliminate illegal fishing methods. He added that this does not mean that the task is easy and possible at present.

The FPO member attributes the reasons for the persistence of the phenomenon of “overfishing” to what he called “mercy” shown to fishermen who subsist on fishing. In addition, the Kurdish-led Autonomous Administration of North and East Syria (NES) faces difficulty in controlling the fishing activities and ending overfishing techniques along the long course of the Euphrates River.

The main fish market lies in the city center of Raqqa. Fish is considered one of the essential nutritional meals and a vital source of food for the people of Raqqa. According to the type of fish, fish prices range from one to five thousand Syrian Pounds (SYP- 0.3 USD to 1.7 USD).

A total ban on fishing is imposed in the Euphrates River for three months annually: March, April, and May (the fish breeding season).

The FPO member relied on “community awareness and collective responsibility” to protect the fish wealth in the river because it “belongs to everyone,” as he put it. He stressed that fish resources should be protected, not be eliminated.