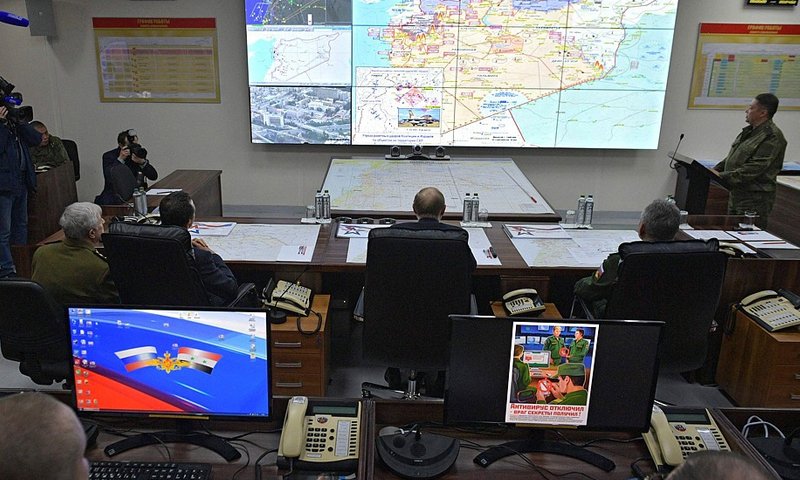 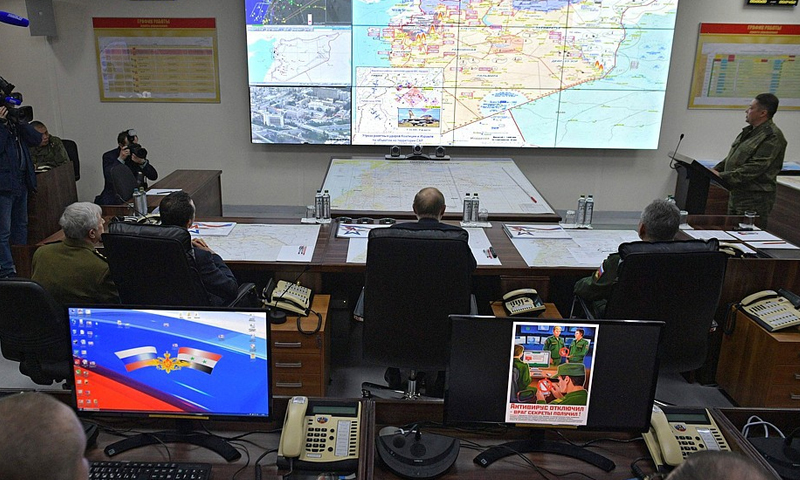 The surprise visit of the Russian President, Vladimir Putin, to Damascus, on 7 January 2020, shocked Syrians because security services were not informed of the visit’s details, or the security preparations that preceded it.

The Chief of the General Staff of the Russian Armed Forces, Valery Gerasimov, revealed the security plan drawn up for Russian President Vladimir Putin’s visit to Damascus back then, Russian broadcaster RT reported.

Gerasimov said, “it was decided to publicize the visit as if it were for Defense Minister Sergey Shoigu, not President Putin.”

He argued that the security preparations were a part of the measures to guarantee the visit’s safety.

Gerasimov pointed out that Shoigu visited Syria more than once, yet no strict safety measures were taken. This contrasts with the measures applied when the Russian President’s last visit took place.

Gerasimov added that Putin’s visit preparations were conducted in secret, although the entire planned route in Damascus was secured. The route and the nearby buildings were checked for any possible electronic warfare. Also, mine-cleaning activities were conducted. Additionally, buildings were inspected by Chemical, Biological, Radiological, and Nuclear Operations Specialists.

According to Russian Defense Minister Sergey Shoigu, a full and in-depth assessment of all potential threats was carried out.

In an interview with Enab Baladi, Aron Lund, an expert on the Middle East and Syria affairs at the Swedish Defense Research Agency (FOI), pointed out that “the visit was on a minimal scale, including the intelligence agencies and Syrian officials. It was made for political reasons and to ensure smooth security coordination.”

Nevertheless, Gerasimov’s statements shed light on the difficult security situation in Syria, particularly in the areas controlled by the Syrian regime. According to Lund, Russia does not trust its Syrian partners’ ability to preserve security and complete confidentiality.

On his last visit to Syria’s capital Damascus, Putin went to some of the tourist sights with the President of the Syrian regime, Bashar al-Assad. The visits commenced after they met at the headquarters of the Russian forces in Damascus in the presence of Russian officers and officials, and with the presence of only one Syrian official, the Syrian Defense Minister Ali Abdullah Ayoub.

In December 2017, during Putin’s visit to the Hmeimim airbase, southeast of Latakia, a Russian officer stopped al-Assad to prevent him from walking alongside Putin. This action reflects the Russians’ control of security and protocol arrangements in Syria.

Al-Assad was surprised by the Russian Defense Minister’s visit to Damascus in June 2016, when he said, “I am very happy to meet you today. What a pleasant surprise! I did not know that you would come in person.”

Russia’s efforts to remove and marginalize the Syrian security services have increased; several incidents demonstrate that Russian officials are assuming command in the Syrian regime-held areas.

In May 2018, the Russian military police arrested personnel of the Syrian regime forces after they carried out a robbery in the town of Babila, south of Damascus. At the time, local networks circulated pictures of Russian soldiers searching members of the Syrian regime and forcing them to lie on the ground.

In 2019, Russia sent a commission to investigate “crimes” committed against Russian forces in Syria and lifted “security measures” in regime-held areas at the time.

Alexander Bastrykin was assigned as the head of Russia’s Federal Investigative Committee.

Bastrykin had met on a visit to Damascus with the National Security Office head Ali Mamlouk and the Syrian Justice Minister Hisham al-Shaar, before heading to the Hmeimim military base.

Academic and expert in Russian affairs Dr. Mahmoud Hamza told Enab Baladi, “Russia has established several security branches to protect the airport, the Republican Palace, ministries and institutions. In the event of any sudden accident, these security services play a protective role.”

He added that “some security officers have started to say publicly that they are working for Russia.”

This, Hamza said, can be seen as evidence of the Russians’ penetration of Syrian security services.

However, there is no accurate information on the Russian security services. Russian military police personnel receive cards as “Syrian Intelligence Services” in order to be able to move around with absolute freedom.

They have established private security services staffed with Syrians in different regions. These services are there to protect government institutions, according to Hamza.

A research paper for the Middle East Directions Program prepared by the Syrian journalist Manhal Barish showed an increase in the role of private security services in Syria, including services financed directly by Russia, such as “ISIS Hunters” and “Sanad for Guard and Security services.”

On 18 June 2019, al-Quds al-Arabi newspaper reported that the Syrian regime established a new security branch under Russian orders, intending to protect government and diplomatic facilities and bodies and prevent any coup in Syria.

Al-Quds al-Arabi reported that a leaked document obtained from a source in the Intelligence Directorate of the Syrian regime and certified by al-Assad on 17 April 2020 shows Russian orders to establish “Branch 108.”

This branch must be linked to Syria’s General Security Directorate. Its mission is to protect government and diplomatic facilities and agencies and to prevent any coup in Syria. This shows “how the Russians firmly control the Syrian regime’s security branches, the State Security Services, and the president’s decisions,” according to the newspaper.

Changes made by Russia

In July 2019, the Syrian regime made new changes in the security system.

Al-Assad appointed Major Ali Mamlouk as his deputy for security-related affairs, and Major General Muhammad Deeb Zaitoun, who has close ties with Russia, as head of the National Security Bureau.

According to the Center for Operational Analysis and Research (COAR), these changes followed Russian efforts to reduce the Alawite grip on intelligence services and minimize Iran’s direct influence on Syria. These modifications were confirmed by the Independent newspaper.

The Independent reported that some observers who are well-informed about the details of the Syrian security services structures and their internal and external relations stressed that all the changes were under direct Russian guidance and supervision.

However, according to Lund, the circle close to Bashar al-Assad is very keen to control its security powers and control decisions. He elaborated that al-Assad’s rule depends on both formal means of power, such as state security institutions, as well as informal means, such as his personal and family networks.

Al-Assad deals with internal security like his father, the former President, Hafez al-Assad. He gives security priority over the remaining state’s institutions. Therefore, Russia or any other government cannot easily penetrate such a system. Besides, despite the presence of Russian and Iranian agents within the Syrian regime’s forces, their effect is often indirect, according to Lund.

In a report published in March 2020, the Malcolm H. Kerr Carnegie Middle East Center discussed Russia’s role in reforming the Syrian special services. The report stated that “Moscow must pay attention to reforming the Syrian special service. Moscow will have to secure its position in the country and confront Iran’s influence in particular. Plus, the security of Russian military and economic facilities, in addition to the security of Russian citizens in Syria, depends directly on the quality of the Syrian intelligence community,” according to the report.

The report pointed out that it is unclear what Russia should do to reform Syria’s security sector. The Syrian intelligence community is incredibly close to the Syrian leadership. Furthermore, appointments in senior positions take place within the close circle of the al-Assad family. While the relationship of trust between Damascus and Tehran allows Iran’s participation in the events, the al-Assad regime is more wary of Russian involvement in such an “intimate and closed” area.

For his part, Russia expert Dr. Mahmoud Hamzah said, “the Russians have significant penetration and dominance over the security and military services, and Iran has similar roles. However, since Russia has an airbase, aviation, and hegemony over the Syrian air, and because the Russians prevented the collapse of the Syrian regime in 2015, this makes Russia’s security presence strong.”

The Malcolm H. Kerr Carnegie Middle East Center report indicated that the military security services, including both Military Intelligence and Air Force Intelligence, have been more oriented towards Iran since the beginning of the war in Syria.

The Syrian regime’s orientation towards Iran was evident in its opposition to Russian initiatives in Daraa. Yet, the General Intelligence Directorate and the Political Security Directorate have closer relations with Russia. As the Russian-Iranian rivalry continues in Syria, the competition between the pro-Iranian special services and the pro-Russian special services will also increase.

Maan Talaa, a researcher at the Omran Center for Strategic Studies, indicated in an interview with Enab Baladi that “the Russian security movement in Syria cannot be understood through indicators such as the intended and unintended violations committed by Russia, ceremonies, traditions or customs only, whether through diplomatic visits or even insurance and security coverage of Putin’s visits.”

In fact, the Russian security activity in Syria is linked to three approaches, according to Talaa, which are as follows:

The first approach began when the Russian forces intervened in the leadership of the security and military operations in Syria, as well as the rearrangement of the Syrian regime forces. This occurred because the structure of both the Syrian regime’s army and security services was depleted during the conflict. Two areas exemplify these shortages: the depletion of human resources, which led to the intervention of Iranian militias, and the depletion of weapons and military equipment, which necessitated the intervention of Russia.

Thus, the command and engineering of operations, goals, and strategic plans (the operations rooms’ presidency) were Russian. Therefore the security intervention was imposed by the military intervention.

The second approach is to restore the military and security institutional structure to limit its devices’ depletion. This necessitates certain re-arrangements in the official structure of the security services and the army. This can take place either by supporting ​​the “Fifth” and “Sixth” corps to gather these militias and later incorporate them into the army or by removing them from the army altogether. Additionally, security posts must be distributed based on various actors’ specialties. For example, the Russians re-establish military security over air security (where they were previously dominant), considering air security as part of military security.

The third approach is related to Russia’s own leadership of the reconciliation agreements and the security and logistical arrangements that it entails, whether in Qalamoun (north of Damascus) or even on the southern front.

The Russian intervention required interference in the security context, such as preserving the state’s structure while making some pro-forma reforms, according to researcher Maan Talaa. Nevertheless, this indicates a defect in the Russian strategy. Russia relies on restoring or building up the state apparatus, whether security services or otherwise, and restoring its legitimacy before the local or international communities. This occurs without considering the indicators that govern the Syrian scene, whether political or economic.

Therefore, Russia seeks to control security decisions, whether in military or field operations, or even for future reforms and changes. These include changes in the Syrian regime’s army and security services, according to Talaa. Thus, Russia is trying to control decision-making without controlling the security services themselves.