Idlib: COVID-19 and the oxygen bottleneck 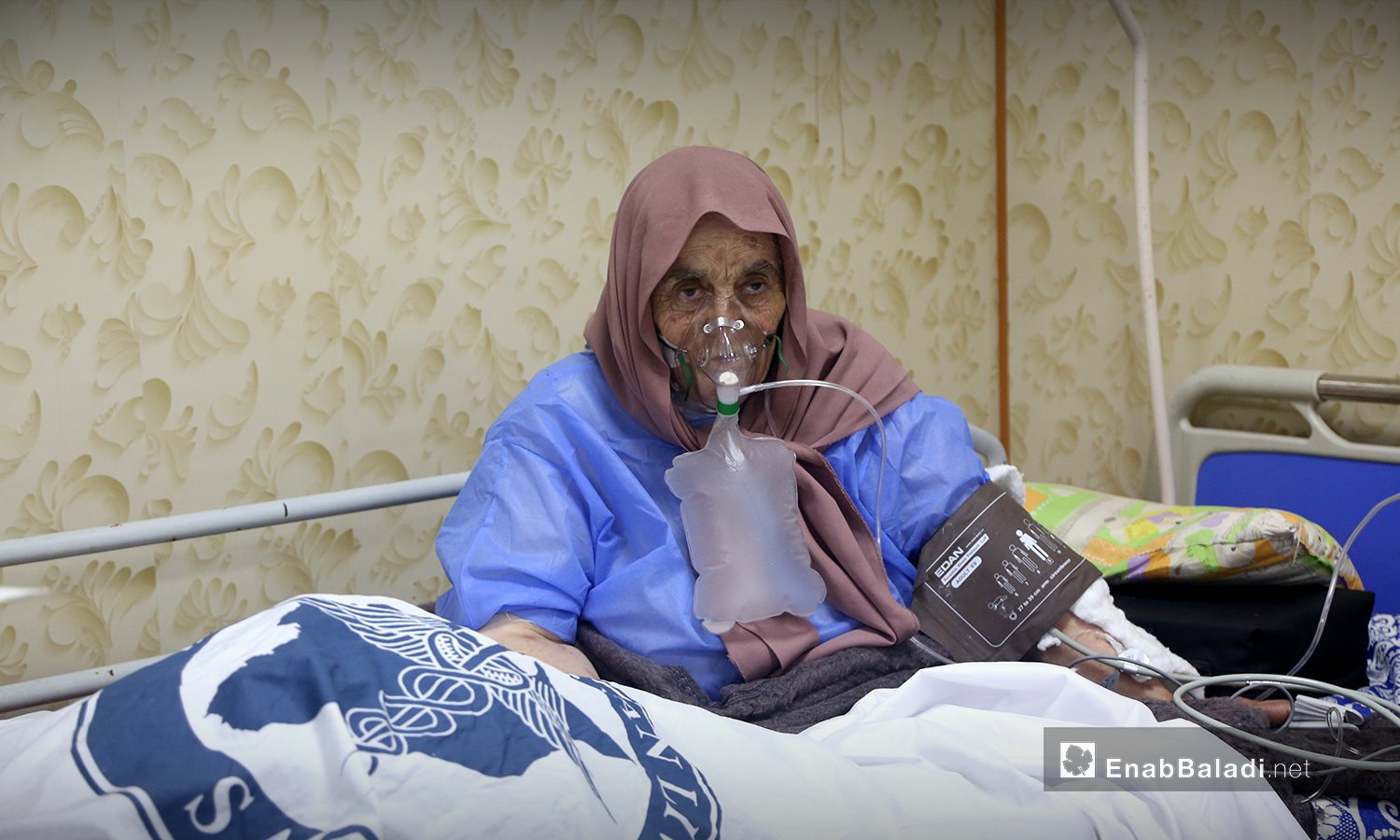 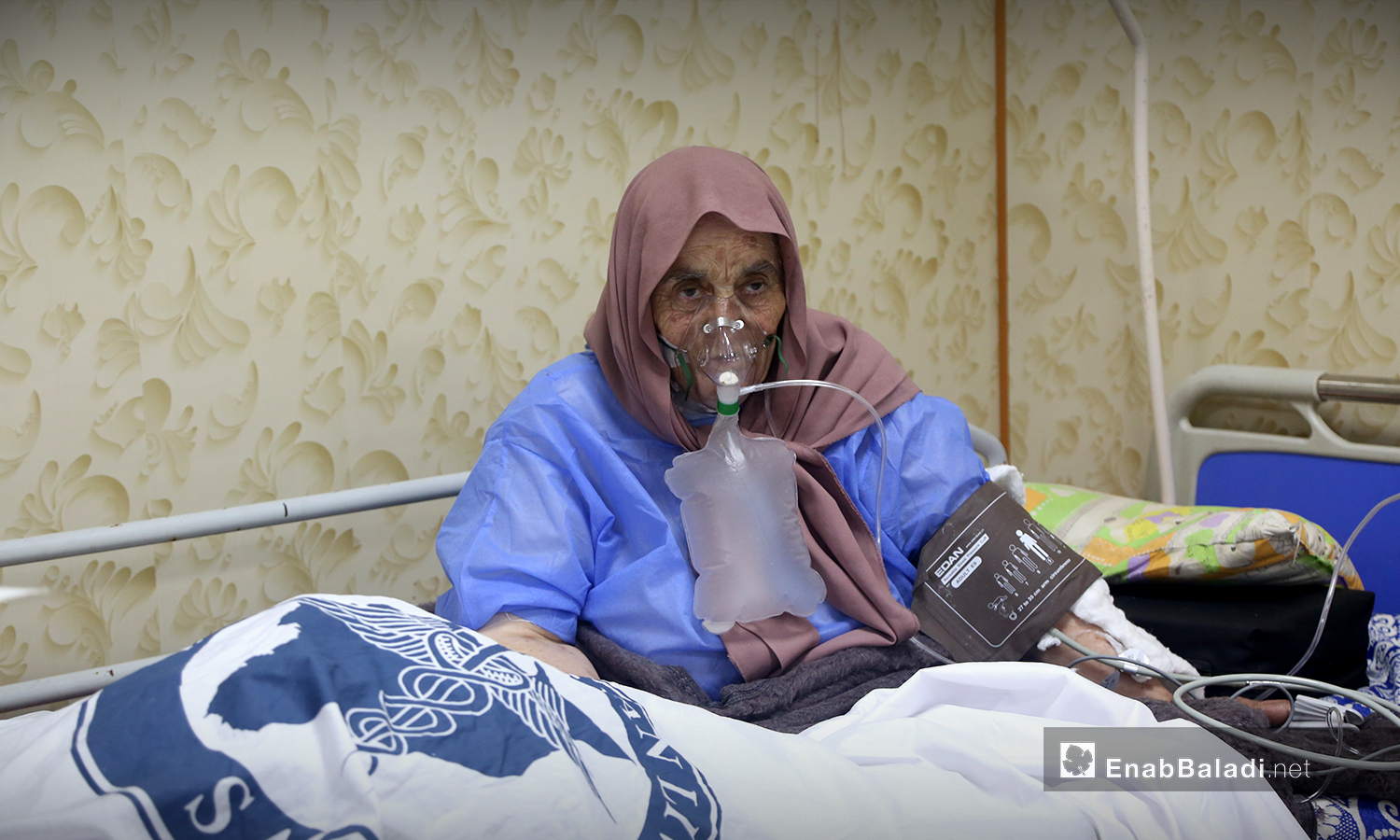 Qusay, twenty-something, desperately haunted the market for portable oxygen cylinders to help his mother breathe, who is a COVID-19 patient, but all his efforts were to no avail. No cylinders could be found in Idlib province, west of Syria, neither in isolation centers, the health directorate, or shops.

Having lost hope, Qusay al-khatib returned home with an inhaler, usually used by people with allergic reactions or patients of asthma. The inhaler is his mother’s, fifty-something, only source of help in her respiratory distress.

The directorate is working to provide medical oxygen generators to cover the gap. Simultaneously, the area’s residents are utilizing available alternatives, he added.

Suffocated by fear and illness

In the case of Qusay’s mother, the hard part lied in her psychological torment, not the infection. She was always preoccupied with unavailable oxygen supplies, which made her out of breath even when her oxygen saturation was normal, Qusay told Enab Baladi. “Upon taking her to the isolation center, she would gasp for breath all the way. However, doctors have repeatedly assured us that her oxygen saturation is stable, but the strain she felt was mental.”

The patients’ dilemma starts with COVID-19 isolation centers. Since there are only two centers, patients are mostly denied services due to lacking beds. “All the beds are occupied,” Qusay said, pointing to the reason why his mother is still at home despite her critical condition.

At-home COVID-19 treatment is basically based on a diet of vitamins; minerals; and a few medicines that doctors prescribe knowing that they are available in pharmacies. Even though the severity of the cases differs from patient to patient, many remain unaided, without ventilators or oxygen cylinders, even when their symptoms worsen.

Qusay’s mother started displaying COVID-19 symptoms. Her deteriorating health took a toll on the family because the elderly and people with chronic diseases are at the risk of severe illness. “We took her to a private hospital in Idlib city. The doctors told us that her oxygen saturation range is 60 percent,” Qusay said.

Doctors provided Qusay’s mother with oxygen to stabilize her saturation and said she needed the constant support of a breathing machine. “An owner of a medical supplies shop told me that he deals with hospitals only and that he cannot sell ventilators to individuals,” Qusay told Enab Baladi.

He then reached out to humanitarian organizations and succeeded in getting his mother an oxygen cylinder.

The Idlib Health Directorate announced the first positive COVID-19 case in the province on July 9, amidst concerns of further deterioration of health status due to the military offensives against the area which turned hospitals and medical centers into a direct target.

Government and official bodies, as well as civil society organizations operating in northern Syria took to social media to post statements calling for the implementation of preventive measures to limit the spread of the virus. However, the said measures were not reinforced, as people failed to abide by them given their poor living conditions and the dire need for masks and sanitizers.

It ought to be noted that an estimated 20,000 persons have been infected with OCIVID-19 in Idlib province.

Popular initiative to rescue the patients

In Binnish city, east of Idlib, the Gauth Voluntary Complex launched an initiative to provide oxygen cylinders for patients.

Unlike patients in other cities across Idlib province, Hassan was not forced to lose hope in search of oxygen for his father. “My father’s health deteriorated shortly after he was diagnosed as having COVID-19,” he told Enab Baladi.

When the doctor visited Hassan’s father, sixty-something, at home and found that he suffered from low oxygen saturation, the doctor referred Hassan to the group running the initiative. Gauth Voluntary Complex provided Hassan with two oxygen cylinders, in addition to the needed mask and the oxygen monitor.

The initiative has so far responded to 20 patients, Ahmad Falaha, director of the complex’s Public Relations Office, told Enab Baladi.

In addition to the difficulty of securing oxygen cylinders, there is a refill problem because the area’s oxygen plants are already drained. The complex receives at least three calls a day from families of patients seeking aid, Falaha added.

There are five oxygen plants in Idlib, accountant Malik Issa told Enab Baladi, who is also a member of the initiative.

Each cylinder costs 25 Turkish Liras (TL), for oxygen prices rose with the spread of the pandemic, denying several patients access to oxygen which the initiative provides for free, he added.

The initiative’s scope is limited to Binnish city because the complex cannot provide enough cylinders, Falaha said, particularly since the initiative is funded by individual donations and owners of medical oxygen plants.

In addition to the initiative, the complex covers other sectors, including education, and provides services to vulnerable groups, among them orphans.

The complex is also working on a project to produce and distribute masks to healthcare facilities, schools, and universities.

According to the World Health Organization figures, there are 157 ventilators in the nine hospitals operated in northwestern Syria, and the planned number is 167 ventilators.