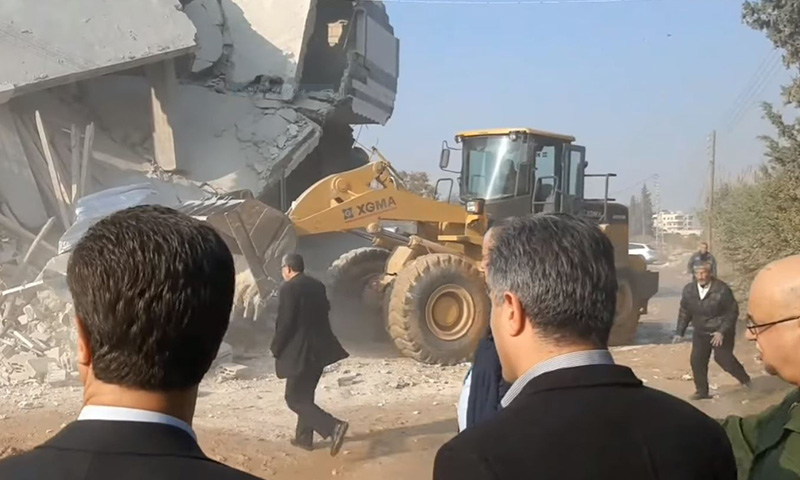 Hama governor supervising the demolition of houses in Hama

Muhammad Krishati, the governor of Hama province, ordered the demolition of residential properties of Syrian civilians in the neighborhood of Naqarneh, southeast of Hama. He also ordered to seize and seal the concrete block factories under the pretext of lacking a building permit; buildings were being constructed randomly.

A video published by the Hama Governorate’s Facebook page on 29 November showed the governor while on a neighborhood tour, rejecting any solutions or proposals on the demolition process’s launch.

The governor stressed, “ Every illegal building must be pulled down,” accepting no excuses and threatening to refer anyone who discusses his order to the oversight authority, according to the video.

The campaign has resulted in the destruction of six buildings and the confiscation of six factories, according to the Hama City Council.

Hama’s City Council said that the illegal buildings pose a “threat” to the building structure, and their removal comes to “ensure the safety of their residents.” Besides, they “distort” the city’s cultural and aesthetic character, considering them a flagrant violation of Hama’s Construction Control because they are built on agricultural land where construction is prohibited.

In a previous report by the al-Jumhuriya website, Krishati said that the Naqarneh neighborhood, south of Hama, was an agricultural area owned by 321 families working in agriculture. These families’ lands were appropriated by the Hama City Council in 1983, as part of Decree No. “880” issued in the same year, which allowed the appropriation and organization of agricultural lands in the vicinity of cities for managing urban expansion. The landowners, who were forced to hand over their lands, were paid compensations not exceeding their agricultural lands’ annual production ten times.

According to the website, the Hama City Council regulated urban construction in the area and compensated those affected after claiming their lands for 33 years, with 10 percent of the uprooted trees of the owners’ farmlands. The Council made other promises to allocate an apartment for each affected person within the housing units to be built.

The Syrian regime is not known to fight slums because whole neighborhoods have been constructed randomly in Syria under the watchful eyes of the Syrian regime_which  provided them with public facilities and services such as water, electricity, and a telephone network_ most remarkably as the Mazzeh 86 neighborhood, which is one of dozens of slums in the capital, Damascus in particular, and in Syria in general.

The problem of random housing in Syria has been exacerbated during the last ten years due to civilian homes’ strategic bombing, mass displacement, and coercive migrations. The Syrian government is attempting to reorganize slum communities (random neighborhoods), especially in the Yarmouk refugee camp neighborhood, according to the two decrees. No. 23 of 2015 and No. 10 of  2018.

On an overall average level, the slum and unplanned areas constitute 15 to 20 percent of all Syrian (rural-urban) areas and 25 to 30 percent in city centers. This percentage rises to more than 30 to 40 percent of slums in main city centers.

These areas’ total population is estimated at 2.5 million persons. The average population density is 450 inhabitants per hectare. The random settlements occupying these areas can be estimated at 5,555 hectares (55,550,000 square meters).