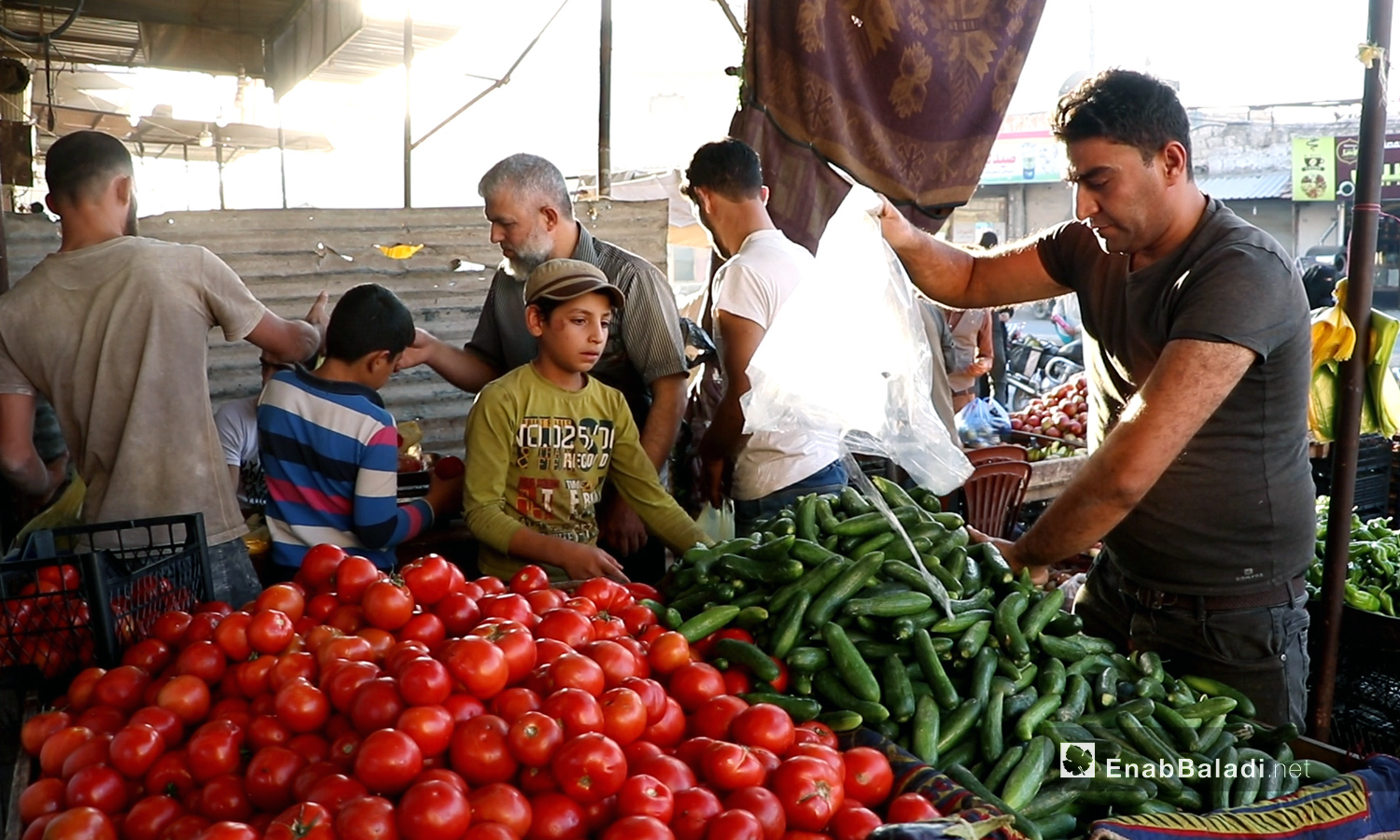 The goods stacked on the shops’ shelves do not create the impression of any economic or humanitarian crisis. The smiling faces of passers-by upon greeting each other do not seem to be affected by the coronavirus that led people worldwide to wear protective face masks and caused the area of al-Bab in northern Syria to be declared as a “disaster-stricken city.”

The al-Bab city in northern Aleppo countryside has reported the highest coronavirus (COVID-19) pandemic infection cases since the virus’s early spread in northwestern Syria on 9 July. This increase led the minister of health in the “Syrian Interim Government (SIG),” DR. Maram al-Sheikh, to declare the al-Bab area as a “disaster-stricken city” on 11 October, after registering 463 positive coronavirus infections.

Ten days after the announcement, the number of infections increased to more than 100 persons; however, the residents showed no greater concern for coronavirus prevention or fighting methods, considering the “catastrophe” of the high prices to be more serious and dangerous.

The announcements of coronavirus infections in northwestern Syria came months late from Turkey’s neighboring regions and areas under the Syrian regime’s control. After the announcement, internal and external border crossings were closed for fear of transmission.

According to Ghazal al-Hamadi, an owner of a wholesale food store, the crossings’ closure turned the city into a “prison.” Al-Hamadi told Enab Baladi that the “crossings are open for import and people keep receiving and paying for the imported goods.”

Enab Baladi met some salesmen from the area who said that goods are available, but the residents’ purchasing power is low, and the situation is “getting worse.”

Marwan al-Shami, a vegetable seller, said to Enab Baladi that “if not for Turkey, Syria’s northern area would not have survived.”

The continuing price increase and the decrease of workers’ wages were attributed by the market people to the deterioration of the Turkish lira’s value against the US dollar, as the Turkish lira replaced the Syrian pound in commercial dealings since last June.

“Previously, the roads were open, we worked better in all fields, and we were not lost between the Syrian pound, the US dollar, and other currencies like now,” said Abu Ashraf, who runs a men’s clothing selling shop for five years in the city of al-Bab.

To confront the soaring prices, the residents adopted the policy of purchasing only the necessary materials, according to their priority, to secure their needs, which the buyers linked their ability to obtain them with the daily wages they receive from their various businesses.

Minister of the economy in the SIG, Dr. Abdul Hakim al-Masri, told Enab Baladi that declaring the city of al-Bab as a “disaster-stricken area” must have an economic impact on trade, shops, and business. Still, the city’s “unnatural” conditions of widespread unemployment, poverty, and deteriorating economic situations could prevent it from being affected.

Al-Masri pointed out that the problems related to changing the currency “need time to end,” and its instability led some people to exploit the situation and raise the prices.

In addition, the loss suffered by the area as a result of the regime forces’ advancement in agricultural lands at the beginning of this year in the western Aleppo and southern Idlib countryside led to the lack of products available in the city, thus increasing prices, al-Masri said.

According to the minister of economy, al-Masri, the SIG’s efforts to alleviate the citizens’ burdens are limited to reaching out to the concerned authorities, providing support, mostly medical, and encouraging the import and export of the produced materials.

The latest assessment and survey conducted by the “REACH” initiative last September indicated that the food basket price has increased throughout northwestern Syria and amounted to 107 USD. Even though the food basket cost increased by 3 percent in last August and by 100 percent last March, prices at the al-Bab city were lower than in other areas.

In the al-Bab city, the cost of the food basket in last September decreased by 6 percent from what it was a month ago, while it kept its high value of six months ago when the price increased by 84 percent.

Meanwhile, the cleaning materials prices fell by 4 percent from last August, while gas prices and water tankers rose by 2 percent. 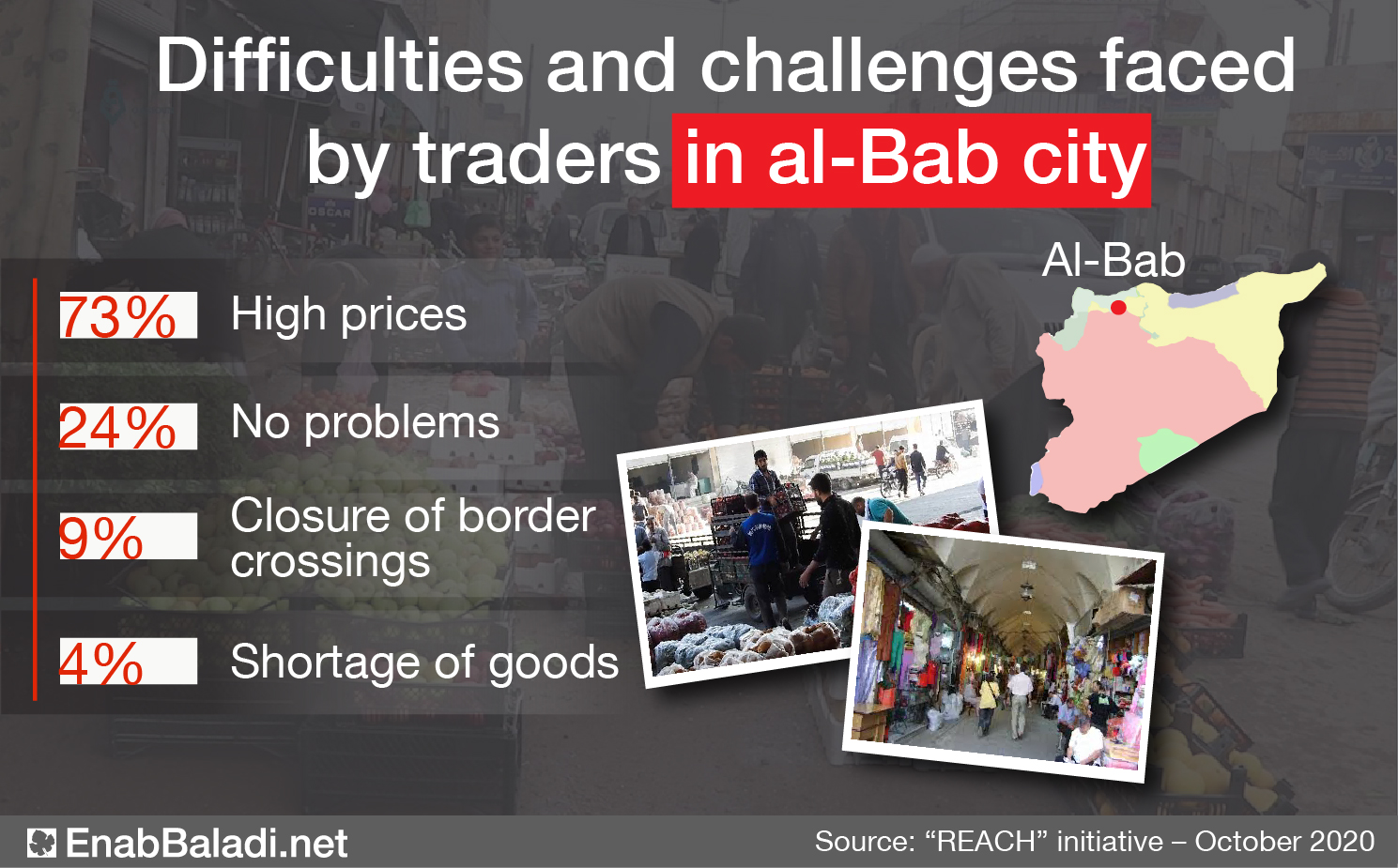