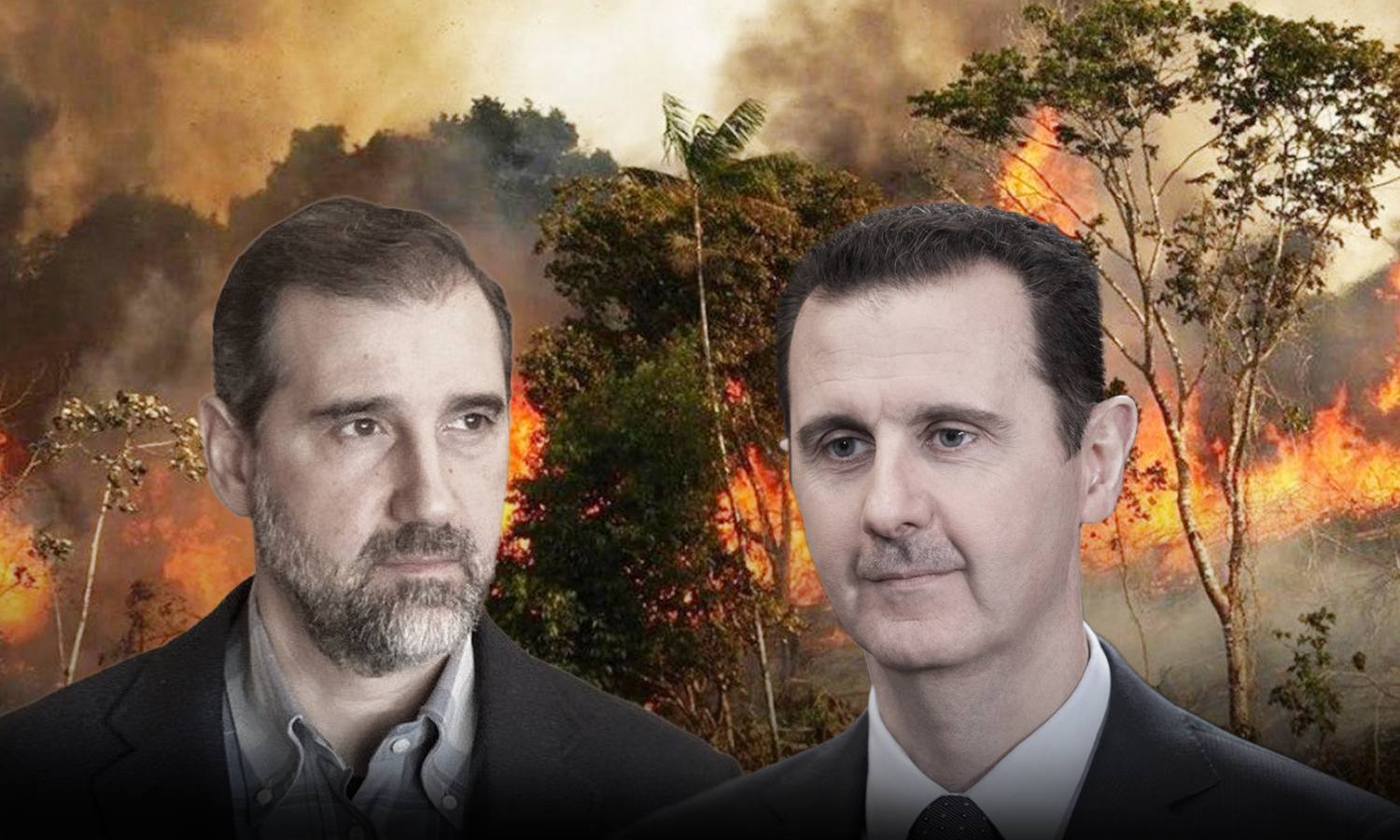 The visit of the head of the Syrian regime, Bashar al-Assad, to the Syrian coast on 13 October after the forest fires that extended to thousands of hectares of lands, described by the Ministry of Agriculture as “the largest in Syria’s history” raised questions about the immediate compensation expected for the affected, especially those who have lost their sources of income.

In an interview with “Sham FM,” a local radio station, and on the same day of al-Assad’s visit, Qatana said that the burnt areas amounted to 11,500 hectares (115,000,000 square meters) in Tartus and Lattakia provinces.

The Directorate of Agriculture in Lattakia governorate clarified that the fire damages affected more than 13,000 farmers from 144 villages.

According to the directorate’s final toll of damages issued on 16 October, the fires caused damage to more than 13 thousand tons of citrus and 4,584 tons of olive crops, with a damaged area of ​​7,190 hectares (71,900,000 square meters).

The regime’s government did not compensate those affected by last September’s fires. The director of the Syrian Agriculture Ministry’s “Drought and Natural Disaster Mitigation Fund,” for those affected by fires, Mohammed al-Bahri, said at the time that the “fund” compensates people in cases of natural disasters only, such as extreme cold, floods, high temperatures, heavy wind, and frost.

Al-Bahri added, the latest fires turned out to be arson fires or caused by negligence at times, and the excess heat was not the leading cause, but it was a helping factor, according to what was quoted by the state-run newspaper “Tishreen” in September.

Until 10 October, neither the Syrian government nor officials responsible for compensation had spoken about the subject matter, despite rising claims on social media platforms. Instead, the government merely discussed in its meetings the latest updates on the fires without discussing compensations.

This continued until 13 October, when al-Assad visited Lattakia province on an unannounced trip to assess the extent of damage closely, according to Syrian presidency platforms.

After al-Assad’s visit, government institutions and businessmen started a race to offer aids and compensations to the fires’ victims, contrary to what happened in the last September Lattakia fires in 2019.

During his visit, Al-Assad said that his government “would bear the greatest financial burden” to help the affected, describing the wildfires as a “national catastrophe in the human, economic and environmental meaning.”

Four million and a quarter million US dollars as compensations

The amount of declared financial compensations allocated to fire victims, from official or unofficial authorities or traders and businessmen, reached about ten billion Syrian pounds (SYP = 4,201,680 USD), and most of the governmental sums came after instructions from al-Assad.

Although the announced figures of donations and compensations are not significant in value against the US dollar, they are substantial considering Syria’s economic level.

These figures are equivalent to about four million and a quarter million US dollars, according to the exchange rate of the Syrian Pound Today website (a Syrian Pound tracking website).

According to the state-run Syrian Arab News Agency (SANA), on 15 October, the Ministry of Local Administration allocated the compensation sum to carry out service projects in the local administration sector in the affected villages and towns according to the needs and priorities of each village and town, under the guidance of al-Assad.

Among these decisions, what was reported by the “al-Watan” local newspaper on 15 October that the Minister of Agriculture, Qatana announced that there are credit facilities to grant soft and subsidized loans to farmers and families affected by the recent fires in Lattakia, Tartus, and Homs provinces.

On the same day, the Minister of Public Works and Housing, Engineer Suhail Abdul Latif, called on companies, institutions, and syndicates associated with the ministry to contribute with all their potentials to rehabilitate what was damaged by the fires.

Syria’s Prime Minister, Hussein Arnous, also discussed plans with 14 ministers to mitigate the effects of fires and help those affected.

In turn, the Syrian General Peasants Union has provided a half-billion (SYP = 208,333 USD), allocated from its executive office to those affected by the fires.

Participation of businessmen in the donation campaigns

The Damascus Chamber of Industry launched the “Cold and Peace” initiative to support those affected by the fires. During the first hours of the initiative, the chamber collected 200 million (SYP = 83,333 USD). This amount is expected to increase with the government’s support. Other governorates followed Damascus in providing donations such as Aleppo, Tartus, and Hama.

According to the economic researcher Younes al-Karim, businessmen benefit from donating. He said they donate to achieve proximity to authority, obtain credit contracts and financial privileges from the government, show themselves to Russia, Iran, or the Syrian regime, and for money-laundering.

Special race between al-Assad and Makhlouf

Hours after al-Assad’s visit to the Syrian coast, the Syrian regime’s loyalists base, Rami Makhlouf, a famous businessman and al-Assad’s maternal cousin, announced that he allocated 7 billion (SYP = about 3 million USD) of Ramak for Development and Humanitarian Projects LLC revenues to support those affected by the recent fires.

Makhlouf did not miss the opportunity to point out that his months-long dispute with al-Assad is continuing, as he held the official receiver appointed by the regime government responsibility for the delay or non-distribution of financial aid.

Syrian political analyst Hasan al-Nifi told Enab Baladi that al-Assad invested the recent fires in the Syrian coast to re-establish his authority, even though the amount he set to compensate those regions does not match the scale of damages resulting from the fires.

Commenting on the compensation race between Makhlouf, who is also from the countryside of Lattakia, and al-Assad, al-Nifi believes that Makhlouf wanted to embarrass the regime after it imposed an official receiver on “Syriatel” company.

As by the official receiver appointment decision, neither Makhlouf nor anyone can dispose of the company’s assets; therefore, both al-Assad and Makhlouf share the same goal: both want mainly to invest in the consequences of the fires to employ them for their private interests.

Lawyer Aref al-Shaal published on his “Facebook” account that “if someone’s money has been in receivership, he\she cannot dispose of it until the receivership is lifted. Moreover, he cannot ask the official receiver any request related to this money other than an account statement or personal expenses for himself and his family.” Al-Shaal added that “statements by Makhlouf are mere propaganda.”

Are the financial compensations enough?

Excluding the seven billion (SYP = about 3 million USD) promised by Makhlouf, which may never reach the victims of the fires because of legal provisions, the actual financial support from the Syrian regime’s government, the Peasants Union, and businessmen amounts to 3 billion and 1/4 billion SYP (equivalent to a million and 400,000 USD).

Economic analyst Jalal Bakar told Enab Baladi that the economy, in general, is the gateway to gaining the people’s favor anywhere.

Bakar added, in the Syrian case, al-Assad and Makhlouf are competing to win the popular base’s support, that is why both sides have announced inadequate financial assistance, which may not reach the affected people.

Nevertheless, al-Assad wants to deliver a message to his loyalists that he can still manage crises in Syria, according to Bakar.