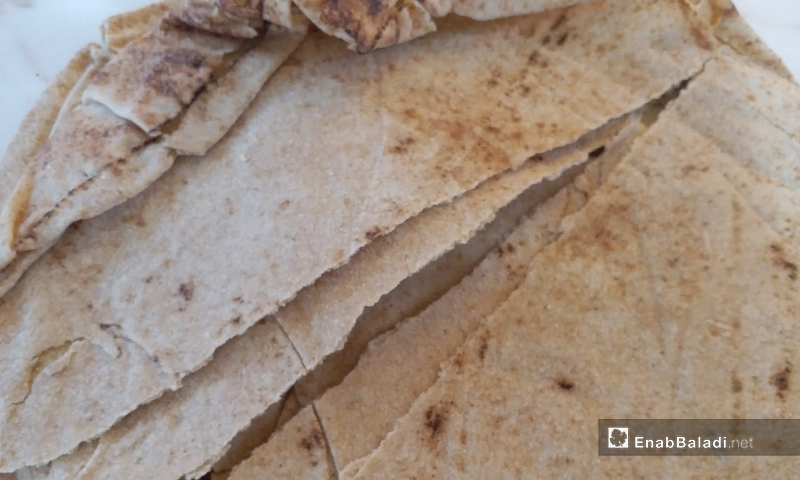 Residents of Quneitra governorate, south of Syria, complain about the poor quality of the government-subsidized bread produced by the main bakeries in the governorate.

Enab Baladi monitored via the demands and complaints of the people that the offences and penalties taken against the violators did not stop manipulating the most important raw materials in making bread in the bakeries of Quneitra.

The people of Quneitra are demanding to improve the quality of bread, according to Ali Nassar, a resident of Ufaniya, a village in the northern Quneitra countryside, told Enab Baladi.

Nassar held the Syrian regime’s Supply Directorate in Quneitra responsible for the low quality of the bread.

Nassar accused the Directorate of colluding with the directors of the bakeries, indicating that no health or control patrols are conducted in the bakeries. Thus, the bakery managers set the weight and price of bread bundles as they wish.

“The bread cannot be even used as fodder for cows,” Nassar said. The bread is so thick and “doughy,” and its color is brown. The bread is full of paper and threads, in addition to the smell of rotten yeast, diesel, and the smoke of the bakeries.

Some people resort to buying “touristic” bread—bread fortified with milk and sugar— as an alternative, considering it as the only solution, according to Hassan Bakr, a resident of the town of Ain Beida in Quneitra countryside.

The average salaries in Syria are approximately 90 USD (190,000 SYP). Still, in the public sector, these numbers drop to an average of 50,000 SYP, which means that the employee’s family that needs a bundle of bread per day pays half of his salary for “touristic” bread bundles per month.

The raw materials and manufacturing method are a vital factor in the quality of bread, as expired flour enters the production process, which takes place quickly without giving the dough enough time to ferment, which increases the poor quality of the bread, a worker in one of the central bakeries told Enab Baladi.

The government justified the low quality of bread with smuggling; the Directorate of Internal Trade and Consumer Protection seized, on 21 August, two tons of subsidized flour in one of the bakeries in Khan Arnabeh.

The Director of Internal Trade and Consumer Protection, Engineer Ali Zaitoun, said in a statement to the state-run Syrian Arab News Agency (SANA), that the seizure of flour took place in one of the warehouses near the bakery, and the necessary rationing control was organized against the violators.

45 Tons of flour are allocated to the bakeries of Quneitra per day, according to Zaitoun.

Some bakeries reduce the weight of the bread bundle to the consumer without supervision, while the loaves are stacked in the piles of loaves of bread intended for distributors (14 loaves of bundles in order to save more bread). The transportation of bread lasts for several hours, which worsens the condition of the bread, according to worker Ahmed. However, the Supply Directorate prohibits that, and it is against the law on subsidized bread distributors.

On 25 July, the governor of Quneitra, Hammam Debyat, considered the loaf of bread to be a “red line and it is not permissible to compromise its quality or to be trafficked,” calling for the Directorate of Internal Trade and Consumer Protection to tighten control over the bakeries operating in the governorate, as reported by the pro-regime newspaper al-Watan.