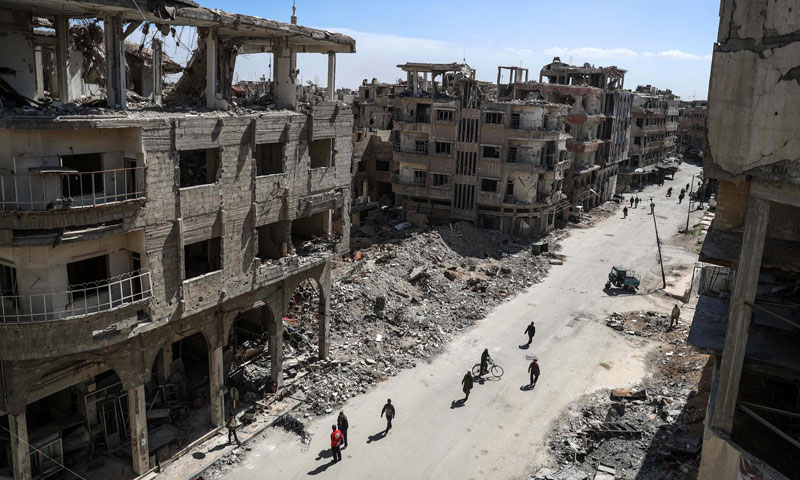 Destroyed buildings in the Eastern Ghouta of Damascus (EPA)

“Once the shell’s sound has been heard, the place was filled with dust and broken glass, while the roof became open to the sky. The restoration of the house ceiling became a dream renewed every year with the winter season’s arrival, and we cannot repair it due to the price increase year after year.”

With these words, Zeina Ghazi, a woman living in Bab Tuma, a borough of Damascus old city, recounted to Enab Baladi her suffering as building materials’ prices hiked, preventing the restoration of her house’s roof.

The 40-year-old woman said that the restoration and construction materials’ prices rose in the current year in an unprecedented way, making house repairing works challenging to achieve and overwhelming.

The woman added that she is left with two choices of whether to bear the high costs or to continue suffering in winter, where rain pour down and leak into the house.

Ghazi brought a contractor days ago, who estimated the ceiling’s restoration cost for her house, which is about 80 meters at 400 thousand Syrian pounds SYP (about 200 US dollars).

Ghazi’s suffering is one of many cases, as house restoration in Syria, which was greatly damaged by the war, is expensive, especially with the rising prices that led to a price increase for basic materials in Syria.

As winter approaches, many residents repair their roofs to avoid rain leaking into their houses, which led to a recent rise in building materials prices due to increasing demand.

A building materials dealer and contractor who asked Enab Baladi not to mention his name for security reasons said that the prices of construction materials witnessed a noticeable rise in Syria since last June.

Meanwhile, the Syrian pound’s value is dropping against the US dollar, as the exchange rate is currently settled at the average price of 2,200 SYP, which caused an increase in the prices of construction materials, especially the imported ones.

How building material costs have risen up

On 16 August, the engineering economist, Muhammed al-Jalali, said to the local newspaper “Al-Watan” that the prices of building materials rose by 100 percent, amid the fluctuation of exchange rates three months ago.

Al-Jalali clarified that producers adapted to the new production costs and continued to raise the prices of building materials, despite the slight improvement of the pound’s exchange rate.

Still, the prices of construction materials are increasing despite the exchange rate stability due to the sharp decline in building materials’ supply.

As for building block prices, they are related to their prices in the factories, measurements, transportation costs to the building site, loading, and unloading costs.

According to al-Jalali, the total bill for building materials has increased by more than 150 percent, and sometimes it could reach up to 170 percent.

On the other hand, al-Jalali pointed out that the demand for construction materials decreased by 50 percent due to the citizens’ reduced purchasing power.

Al-Jalali added, prices are set according to supply and demand, as the demand for any commodity in the market changes swiftly, and once the exchange rate starts to fluctuate, the demand is immediately affected.

Real estate expert Ammar Youssef pointed out to the “Al-Watan” newspaper that currently there are no signs that the construction materials prices would drop, and that it might even rise even more.

Youssef confirmed that the demand for building materials is at the minimum levels due to the exchange rate fluctuation. He indicated that the construction activity is weak in the regulated regions and is limited to informal settlements only.

Damascus governorate requires permits for restoration and emergency repair of real estates and plots within Damascus’s old city to preserve the old houses in cooperation with the General Directorate of Antiquities.

With relative calmness re-established in the Ghouta towns, many residents have restored their houses, even relatively, to avoid the high rental costs.

Fadi al-Abdullah, a resident of the Eastern Ghouta, recounted to Enab Baladi his experience by saying “when I returned to my home, the house’s condition was different, as the scenes of destruction that befell the place were unimaginable, not to mention that the house was robbed of its furniture.”

Al-Abdullah added, “a house which is partially destroyed needs rebuilding and cladding.” He continued saying, “my house was left with the foundations only, while most of its walls and doors were completely removed or have disappeared.”

Al-Abdullah said, “we decided to restore the house by ourselves after we lost hope that the regime would rebuild our house.”

“We brought someone to take the doors and windows’ measurements, to repair them after we decided to return to our home in the Ghouta; however, we were stunned by the high cost,” al-Abdullah said.

Al-Abdullah’s house needs three aluminum doors and 11 pillars, that is why he said sarcastically, “imagine the high cost after the massive increase in the prices of construction and restoration materials, which we could not afford; therefore, we figured out that renting is better for us to avoid these costs.”

The individual restoration projects of the Ghouta residents came after some of them lost hope of reconstructing the damaged houses after the battles and bombardment campaigns of the Syrian regime.

The Rif Dimashq province estimated the number of the eastern Ghouta residents who returned to it by about 20,000 persons, according to the statements of the governor, Alaa Munir Ibrahim.

Ibrahim confirmed that the necessary measures would be taken to return the rest of the residents, including opening the roads and restoring schools and infrastructure.

Nonetheless, according to what many of the Ghouta residents told Enab Baladi, the regime’s government has not fulfilled its promises. In the meantime, property restoration remains in the framework of individual initiatives by property and real estate owners.

Iron and cement in Russian hands?

Based on a study by the Syrian regime’s Ministry of Industry, the government justified its decision to “protect the national industry, for the local production is up to the highest international standards,”

Syrian Economic researcher Adham Kudeimati said to Enab Baladi that the decision would further allow the Russian companies to control the Syrian market entirely, as Russian companies invested in iron in Syria according to the 2018 agreement.

He clarified that the agreement included establishing factories in iron smelting and related matters, which means that these factories are ready to supply the Syrian market with these materials.

According to Kudeimati, the Syrian regime restricted iron trade to people close to it in the previous years.

The researcher expected that the Syrian regime would issue a similar decision regarding cement, especially that Russian officials declared years ago that they have concluded agreements with the Syrian regime’s government for extracting cement materials and that they aspire to export it to the world.

Kudeimati added if the Syrian regime wanted to preserve the national industry, “as it claims,” it would have imposed more taxes on these materials, particularly for construction in Syria, rather than banning its import.

The economic researcher pointed out that the regime aims to prevent the importation of iron to empty the Syrian market from these materials and limit them to Russian companies only.

Kudeimati added these materials enter Syria with difficulty, especially after the international sanctions on the Syrian regime under the “Caesar Act,” which provides for imposing sanctions on anyone who concludes contracts for reconstruction in areas controlled by the regime and its allies or for construction and engineering projects.

On 29 August, the regime’s government’s Minister of Internal Trade and Consumer Protection, Talal al-Barazi, issued a decision raising the price of a cement bag sold to consumers from the al-Omran corporation from the price of 2,300 SYP (1 USD) to 3,500 SYP (1.5 USD).