Man in the news: US journalist Bilal Abdul Kareem wanted by two enemies in Idlib 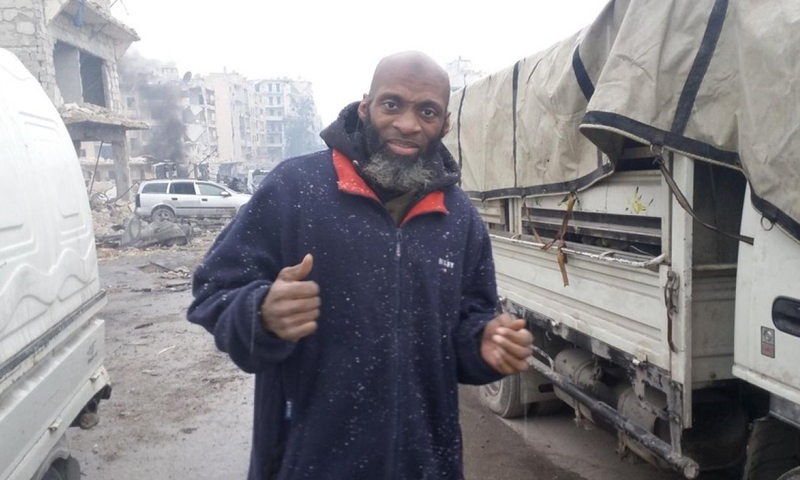 The British Broadcasting Corporation (BBC), the American “CNN” network, the Qatari “al-Jazeera” channel, the “Sky News” network, “MiddleEastEye” (MEE), and international media outlets and networks, worked with the American journalist Darrell Lamont Phelps, born in the US state of New York and nicknamed “Bilal Abdul Kareem” after his conversion to Islam.

Bilal Abdul Kareem worked as a correspondent for the above-mentioned media outlets, and he traveled between Sudan and Egypt during his journalistic work, as reported by the British newspaper “Dailymail.”

Abdul Kareem founded his own TV network “ On The Ground News (OGN)” later, because he felt increasingly uneasy with his assignments, which he considered were too “negative about the Islamic World.”

Abdul Kareem is best known for his reports on the final days of opposition forces’ control of neighborhoods in Aleppo governorate in December 2016, when he worked as a Middle East Eye Contributor.

During his stay in the eastern neighborhoods of Aleppo, he documented the bombardment and destruction that affected civilians and the humanitarian situation of the people during the regime’s siege of the area.

Abdul Kareem sends messages to citizens in Western countries through his channel “OGN”, explaining the military and humanitarian conditions on the ground.

Abdul Kareem said in one of the videos, “If there is someone in the world who believes that the war in Syria is a war on terror, I tell you, those who say that think that you are an idiot, ”referring to the regime’s justification for bombing opposition-held areas under the pretext of“ fighting terrorism.”

“Erdogan, your reciting of the Qur’an is good, but you missed the opportunity. You had the opportunity to become the hero of this nation and save these poor people. You also made Saudi Arabia and Qatar miss the opportunity to save Syrian people as well.” These were Abdul Kareem’s last sentences before the Syrian regime re-controlled Aleppo and displaced 75,000 people, according to United Nations statistics. These sentences reflect the journalist’s benchmarks since he arrived in Syria.

On 17 December 2016, Bilal Abdul Kareem was the most influential figure of the week for the audience of Qatar’s al-Jazeera channel, as a result of his media coverage of the recent days of the opposition’s control of Aleppo, as he was the only foreign journalist inside the besieged area.

After he came to Syria, Abdul Kareem was placed on the US’s drone Kill List; he survived several assassination attempts, including drone strikes by the US military in 2016. Moreover, Hay’at Tahrir al-Sham (HTS) arrested him on 13 August for his critical reporting.

Wanted by the US  and detained by the HTS group

“Dailymail” quoted Abdul Kareem as saying that his network offices in northern Syria were subjected to a series of attacks (five attacks), all in 2016.

In the first and second attacks, he was not hurt because he had not been in the offices at the time. The third attack took place when he was shooting a story in a remote town in Aleppo. He was able to survive the bombing but was slightly injured.

In the fourth attack, another bomb hit his office, killing a ten-year-old girl, a woman, and an elderly man who were inside the office, which was being used as a charitable center, but missing Abdul Kareem. The fifth attack took place when he was in “the Aleppo Artillery School.”

Abdul Kareem later learned from a source that “Dailymail” did not clarify that he was on America’s infamous ‘Kill List’, known as ‘Disposition Matrix.’ Besides, he has been targeted by the US “Incirlik” base in Turkey, which contains a launchpad for unmanned aircraft.

Abdul Kareem filed a complaint in a US District Court in Washington, DC, in March 2017, in which he appealed to the US government to remove him from the list of assassination targets.

In June 2018, Judge Rosemary Collyer issued a ruling that the US government cannot assassinate Abdul Kareem without giving him a chance to stand in court to defend himself, as reported by Dailymail.

This pursuit by the Americans did not intercede for the journalist with Hayat Tahrir al-Sham (HTS), which controls the province of Idlib, as it arrested him and his escort in the village of Atmeh, north of the province, on the Syrian-Turkish border.

He also reported that the British aid worker Tauqir Sharif, known as “Abu Hussam”, was tortured in HTS custody after he was arrested for the second time, on 11 August.

The journalist, Abdul Kareem did not comment on the arrest of Tauqir Sharif, but he had a clear position previously. He said, “We will not kneel before Bashar al-Assad, and we will not kneel before. The liberated areas do not belong to anyone,” in response to the arrest of the“ HTS ”media activist Ahmad Rahal, in 2019, after he published a recording of the HTS former leader “Abu al-Abd Ashidaa” in which he criticized the“ HTS”.

Abdul Kareem threatened “the HTS” by publishing the recording of “Abu al-Abd Ashidaa” as well, and said that he would publish it again, and demanded the release of Ahmad Rahal, stressing that the journalists must be given the freedom to work.

Last June, he was subjected to an arrest attempt, from which he managed to flee on the back of a motorcycle, shortly after Sharif was detained, according to MEE.

Interviews with some al-Qaeda leaders while some claim he is a member of al-Nusra.

Abdul Kareem has been accused of being a propagandist of al-Nusra Front, an al-Qaeda linked jihadist group in Syria (which disassociated itself from al-Qaeda and changed its name to Fatah al-Sham by merging with a group of factions and then turning to Tahrir al-Sham),  as he has open access to communicate with the leaders of the organization.

Journalists Max Blumenthal and Ben Norton have quoted a Syrian member of the faction in the opposition-held areas, as saying Abdul Kareem was a full member of al Nusra, according to Dailymail.

However, the most important reason for accusing Abdul Kareem of belonging to “ al Qaeda” is his meeting with one of the al-Qaeda’s most prominent leaders, “Abu Firas al-Suri”, shortly before he was killed in 2013, and it is worth mentioning that the last journalist he met with was Abdul al-Kareem.

Abdul Kareem held a meeting with the HTS former leader and Sharia scholar “Abu al-Yaqzan al-Masri,” after he issued a fatwa that allowed the killing of members of “ Ahrar al-Sham”, during the fighting of the two factions in February 2018. He also met with “Abu al-Abd Ashidaa” in the battles of Aleppo 2016.

Abdul Kareem made other two interviews with “Abu al-Abd Ashidaa.”

The first was conducted when Abu al-Abd Ashidaa was an HTS member and harshly criticized its activities in September 2019. The other meeting was held after his release from its prisons.

He also held a meeting with the commander of the military wing in the HTS, “Abu Khaled al-Shami,” during which he talked about the military situation in Idlib governorate, in November 2018.