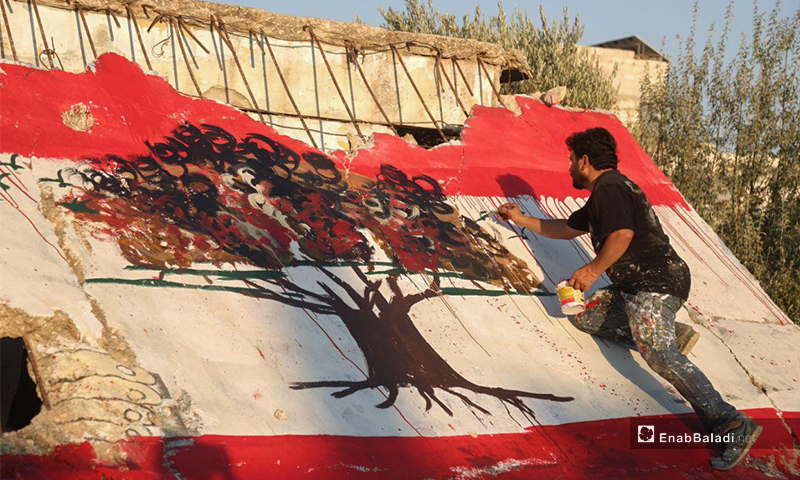 Following a massive explosion that rocked the port of Lebanon’s capital Beirut, a group of Syrian artisans residing in the capital, did not limit themselves to following the news and seeing the scenes of destruction of homes and buildings there. Instead, they rushed to launch an initiative on Lebanese Facebook groups to help the affected people in the maintenance and repairs of their houses and shops.

Five friends, a false ceiling services professional, a plumbing technician, a painter, and flooring installer, an electrician and a carpenter agreed to establish a working group to repair houses damaged by the blast, free of charge, provided that the homeowners are to secure the materials needed for the restoration.

“Our initiative is self-evident and humanitarian to be our response to what happened,” one of the organizers of the initiative, who has lived in Lebanon for 25 years, Maher al-Hamwi, told Enab Baladi.

Al-Hamwi added that the decision to carry out an initiative came because the participants have been living in Lebanon for a long time. The initiative started with five young men of five different professions; then, four other young men later joined to work with the group.

The initiative was met with approval from Lebanese citizens, and a demand for help. Hours after publishing the ad on Facebook, al-Hamwi received many calls from people to fix power cuts, damaged ceiling, and interior walls or a damaged drainage system at home.

However, many of the people who asked for help did not accept the Syrian artisans working for free and insisted on giving them money, even if it is a nominal sum or to cover at least the transportation costs, according to al-Hamwi.

Twelve days after the massive explosion that shook Beirut, al-Hamwi and his friends continued their initiative, as many Lebanese and Syrians welcomed and thanked them for it.

Syria’s Ambassador to Lebanon Ali Abdul-Karim said that the explosion that struck the port of Beirut, on 4 August, has left 179 people dead so far, 43 of them are Syrian nationals, in addition to 30 missing people and more than 5,000 thousand injured. One hundred wounded people are in intensive care units, according to the Lebanese Minister of Health, Hamad Hassan.

According to the United Nations Educational, Scientific, and Cultural Organization (UNESCO), the explosions at the Port of Beirut also inflicted severe damage on some of the oldest districts of Beirut, several hospitals and healthcare clinics.

The UNESCO reported in a preliminary assessment of the damage to cultural institutions and heritage sites in the city that at least 8,000 buildings were affected. About 640 are historic buildings, of which about 60 are at risk of collapsing.

The United Nations (UN) launched a humanitarian appeal, aiming to raise $ 565 million to help Lebanon move from humanitarian relief to the recovery and reconstruction phase, according to what was reported by “UN News,” on 14 August.

On 8 August, the SCD published on its official Twitter account photos of its volunteers carrying banners with expressions of solidarity, including the sentence of the late Lebanese writer Samir Kassir, who was assassinated in 2005, “When the Arab spring blooms in Beirut, it announces the time of roses in Damascus.”

Another sign read: “To the souls that preceded death, to the heroes of the Lebanese Civil Defense .. Lebanon’s Cedars will not bend.”

A mural from rebel-held Idlib

This was not the first time that Idlib showed solidarity with Beirut, as artist Aziz al-Asmar painted with his brush and colors a “mural” in solidarity with the Lebanese capital.

Al-Asmar, who had previously lived in the port area for more than 15 years, told Enab Baladi that it is a humanitarian duty to show solidarity with Beirut in this ordeal, mainly since the area that experienced the explosion is inhabited by Syrians and Lebanese supporters of the Syrian revolution, as he put it.

Al-Asmar, who is famous for his wall paintings on the ruins of destroyed homes and buildings in Idlib governorate, added that humanity is indivisible, and man must stand against injustice anywhere, considering that “The presence of Iran in any place leads to its destruction,” reminding hundreds of Lebanese who stood by the Syrians, as well as the presence of Lebanese detainees in the prisons of the Syrian regime. 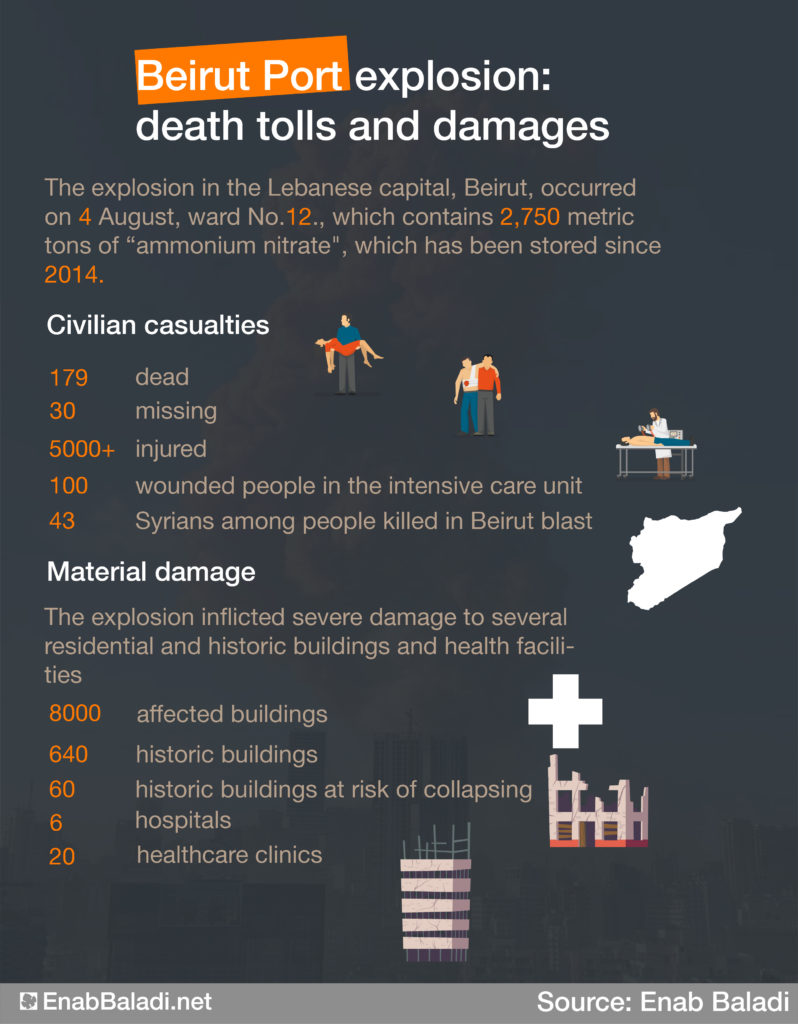