An employee of the “ Ataa” Humanitarian Relief Association, supervising the wheat harvesting operation in the city of Ma'arrat Misrin within the project “Supporting the wheat value chain” -  14 June (Enab Baladi / Shadia Taataa) 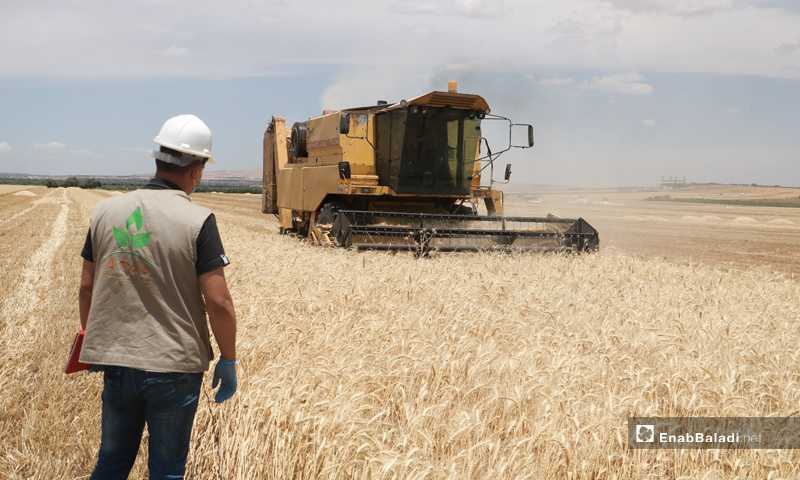 The loss of the agricultural sector, which resulted from the recent flood that hit the region of al-Sheikh Bahar, north of Idlib, last week, amounted to more than 30 dunums or i.e. equivalent to 40,000 US dollars (USD).

Abdullah Ismail al-Abdullah, a farmer, displaced from the western countryside of Aleppo to the village of Killi in northern Idlib, told Enab Baladi that no organization has awarded compensation for the losses faced by many farmers including him due to floods and unseasonal rains in north-western Syria. Thus, the farmers have to bear the loss or damage that exceeded their capacities.

On 18 June, several agricultural lands were flooded due to excessive rainfall and severe thunderstorms in northern Syria, affecting dozens of displacement camps.

Early warning in northern Syria’s down… prevention is the solution

The coordinator of agricultural projects at the “Ataa” Humanitarian Relief Association, Safi al-Hayek, told Enab Baladi that the floods in the Mediterranean region in general and Syria, in particular, are rare as floods occur more in the tropical areas.

Since there are no early warning systems against flash floods in the developing countries, it is difficult to anticipate any flooding like what happened recently. According to Hayek, this explains the urgent need for a specialized weather forecast system in north-western Syria, to mitigate the risks resulting from weather conditions such as frost and floods.

Al-Hayek added that all environmental and natural risks are taken into consideration through the design and implementation of agricultural projects as well as a risk mitigation plan was developed. He gave an example of the frost that damaged crops last winter. At that time, the association notified farmers of a harsh air depression (a weather term meaning an area of low pressure) that could affect their wheat crop and distributed “urea fertilizer” among farmers to help the plant grow and restore its vitality after the frost wave.

For the current season, the early wheat harvest lowered the risk of the recent heavy rains, noting that if the storm had dropped heavy rainfalls before the harvest, this would have led to a “big” disaster and “enormous” losses, according to al-Hayek.

Regarding the measures currently being taken by the “Ataa” Humanitarian Relief Association to reduce the risk of floods on agricultural lands, al-Hayek stressed that no steps are taken now for being rare, and to overcome the catastrophic effects of the floods; the governments have to intervene, not just organizations.

Flooding is a temporary problem

In addition to the environmental dangers surrounding the agricultural lands, several problems arise in the agriculture sector in northern Syria, on top of which is the spread of various diseases, whether in field crops or seasonal vegetables. In fact, the range of infections could be the main reason for the loss of farmers in the Syrian north.

The crop engineer Anas Abu Tarbush said that the viral diseases of crops are transmitted from the seeds themselves or by some insects, noting the costs of clearing corps from viral infections are often high.

As for insect pests and diseases affecting seasonal (summer) vegetables such as cucumbers, tomatoes, zucchini, and others, they are referred to as broomrapes (plant-parasitic weeds).

Abu Tarbush told Enab Baladi that broomrapes constitute one of the most difficult to control of all biotic constraints that affect crops, causing a loss of 100 percent or 50 percent to the farmers, according to its spread in the field.

The farmer Abdullah Ismail al-Abdullah, in addition to his recent losses due to the floods, also suffers from a shortage and high prices of fertilizers and pesticides, indicating that this “will force many farmers to abandon their cultivation.”

The constant lack of electricity exacerbated their sufferings; north-western Syria depends highly on power generators to draw groundwater, not to mention the soaring fuel prices, which placed additional financial burdens on farmers.