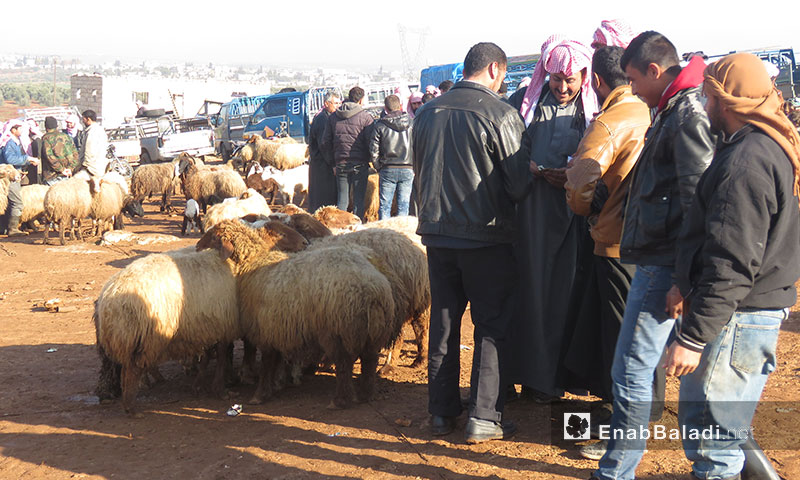 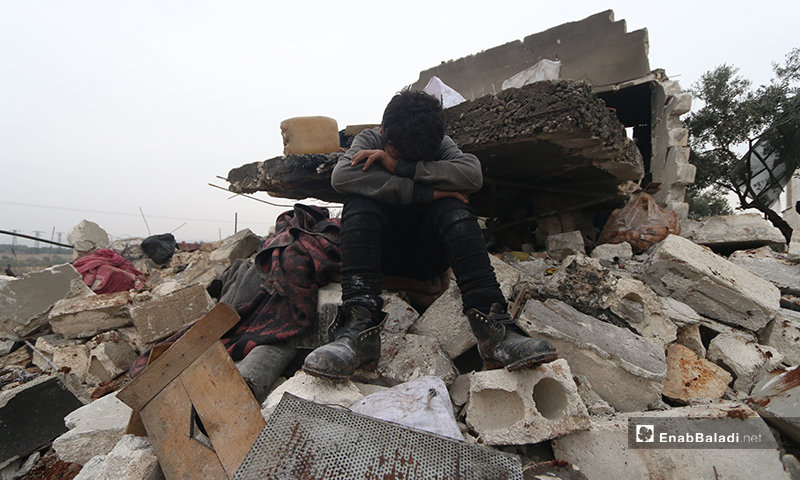 With the approach of Eid al-Adha (Feast of Sacrifice), many Syrian people do not have the financial capacity to purchase an animal known as “Udihya” ( usually a sheep, goat, cow or camel to sacrifice), because the fluctuations of the Syrian Pound (SYP) against foreign currencies have adversely affected, during the past few months the economic and living conditions of many Syrians with different geography of the conflict in Syria.

In opposition-held north-western Syria, high prices have reduced citizens’ great demand for sacrificial animals, due to “the tight situation and severe poverty” as a result of the lack of job opportunities.

In fact, people living in the cities and towns of northern Syria need to receive meat from animals sacrificed for Eid-al Adha,  not to distribute meat, according to Radwan Fatrawi, a livestock dealer and a resident of Qurqania village.

Fatrawi told Enab Baladi about the prices of livestock, and he said that the price of a fattened sheep or a sacrificial ram is 8,500 SYP (3.7 USD), and the cost varies according to the market and reaches a minimum of  8,000 SYP (3.5 USD).

The price of the calf, with a weight between 500 and 600 kilograms, reaches three million SYP (1,333 USD), which Fatrawi considered a significant amount in relation to the average income of Syrian families at the present time.

The exchange rate amounted to 2,010 SYP per US dollar, according to the website of Syrian Pound Today (a Syrian Pound Tracking website).

On the other hand, the breeder or the owner of the sheep is complaining of selling their sheep in their capital value or with a tiny profit margin after grazing sheep at a high cost because of the high price of grains and fodder, despite the rise of commodity prices in general.

Causes of the high cost of sheep raising: fodder and smuggling

Livestock trader Ahmad al-Hubaishi, who is from the Eastern Ghouta in Rif Dimashq, highlights that there are several reasons for the high prices of livestock; first of all, the US dollar’s exchange rate soared against the SYP. In addition to that, there is a growing demand for sacrificial animals in the absence of the market due to smuggling operations to areas under the control of the Syrian regime to Iraq.

Livestock farming was affected adversely in the north-western regions of Syria due to losses in agricultural areas incurred by the population, as a result of the battles and displacement waves.

After the loss of broad areas of pastures and feedlots, breeders had to move their livestock to relatively safe pasture areas, but they were narrower. Thus, the breeders were forced to sell their livestock at a “few” prices to the traders. They, in turn, smuggled them to areas under the control of the Syrian regime and “the Kurdish-led Syrian Democratic Forces (SDF), according to livestock dealer Muhammad Khair al-Muhammad in a previous interview with Enab Baladi.

The smuggling of sheep and livestock is not confined to the governorate of Idlib but extends to all Syrian regions, including the northern countryside of Aleppo and al-Jazira region, which sees smuggling operations to Iraqi Kurdistan.

As is the case in the north-western regions of Syria, the prices of livestock in the north-eastern regions, which are under the control of “self-management,” increased by approximately 467% compared to their prices in 2019, which ranged between 1,200 and 1,500 Syrian pounds per kilo of meat, while it ranged in The current year is between 7,000 and 7,500 Syrian pounds.

As is the case in north-western Syria, the prices of livestock in north-eastern Syria, which is under the control of the Kurdish-led Autonomous Administration of North and East Syria (NES), increased by approximately 467 percent compared to their prices in 2019, which ranged between 1,200 and 1,500 SYP ( nearly 1.5 and 2.2 USD) per kilo of meat, while its current price ranges between 7,000 and 7,500 SYP (3.1 and 3.3 USD).

Hussein al-Zakaria, a butcher from the city of Raqqa, does not think that the residents will be able to offer sacrifices at a large scale, due to the high prices and the severe living conditions, in addition to the spread of livestock smuggling in the area and high transport fees.

Hussein, who has been slaughtering the Eid sacrifices for more than 20 years, used to register the names and dates of customers who were preparing to slaughter the udhiyah (sacrifice) at least a week before Eid al-Adha, but he noticed this year that his customers were reluctant to slaughter because of the high prices, according to what he said to Enab Baladi.

He would receive 2,500 SYP (4.1 USD) for providing the services of halal slaughter for an animal in 2019, and the fare rose in the current year to range between four and five thousand SYP per carcass (1.7 and 2.2 USD.)

“People of Raqqa are experiencing their worst living, economic and social conditions and they cannot make sacrifices during the Eid Al-Adha festival,” with these words, Mariam al-Abdullah, from the residents of al-Rumailah neighborhood, northeast of the city of Raqqa recounted her family’s inability to slaughter the Eid sacrifices this year.

As inflation and high prices have repercussions on the Syrians inside Syria, regardless of their region, and the different parties controlling these areas.

Al-Abdullah, in an interview with Enab Baladi, complained about the low salaries of the employees of the “NES” and the Syrian regime’s institutions, adding that these salaries barely meet the family’s needs of bread. People cannot afford the purchase of Eid sacrifices.

In the Syrian regime-held areas, specifically in the capital, Damascus, the price of a kilo of live organic sheep is between 6,300 and 6,500 ( 2.8 and 2.9 USD), amid the livestock breeders’ expectations for higher meat prices as Eid al-Adha approaches.

The residents’ demand for sacrificial meat remains “weak”, according to Admon Qutaish, the head of the Butchers’ Association, to al-Iqtisadi —a local website focused on financial news, in light of the decisions of the Damascus Governorate that impose on butchers to pay an allowance for their work during the Eid period within the shops and prevent slaughter on the sidewalks.

The Executive Office of the Governorate of Damascus issued a decision to grant a license to slaughter the sacrifice of licensed butchers in their shops in the city of Damascus during the Eid period of the current year, after taking a written pledge, as reported by the government newspaper “Tishreen”.

This butcher is required to pay a “benefit allowance” for the Damascus Governorate Fund at a value of 40,000 SYP (17.8 USD), for the Eid al-Adha period only, provided that the butcher has a license to practice the profession of butchering.

Qutaish, who said that smuggling statistics are not “accurate,” pointed out that smuggling operations towards Lebanon are greater, the breeder obtains a customs declaration to sell his livestock in the city of Hom, to be later smuggled to Lebanon especially during the period in which exports are banned.