The M4 highway from al-Hasakeh side (the Rudaw network)

Russia has reopened the M4 international road from the northeastern side of Syria, connecting the provinces of Aleppo and al-Hasakeh following understandings revealed by an official in the Kurdish-led Autonomous Administration of North and East Syria (NES) between Moscow and Ankara, which have military forces on both sides of this road, along with the United States of America (The US), the prominent dominant military power in the area.

The scene of a Russian military convoy escorting some civilian buses, on 25 May, while heading for the first time in seven months, from Tel Tamer in al-Hasakeh countryside to Ain Issa in the countryside of Raqqa, indicates the Russian desire for a permanent presence on this road.

The services provided by Russia in Syria do not sound free, and Enab Baladi researched with a group of specialists about the profits that Russia can achieve from re-opening the road.

Enab Baladi concluded that Moscow is seeking to create a new reality in Syria and make economic and political gains, through building a common ground for the conflicting forces, which necessarily leads from its point of view to a settlement in the country.

Dr. Karam Shaar, a Ph.D. holder in economics who works currently as a senior analyst at the New Zealand Treasury, believes that the re0pening  a part of the M4 international road will bring benefits and increase productivity for all parties. Accordingly, activating the “M4” will increase the communication between the parties associated with this road, bringing them an economic benefit, Shaar said.

Shaar linked the activation of the M4 highway with the implementation of the Caesar Act, a US legislation that sanctions the Syrian regime. Shaar believes that Russia is doing its best to reach settlements and approaches in Syria, which will reduce tension before the law enters into force.

Shaar pointed out that the Russians’ main motive from re-opening the road between Aleppo and al-Hasakeh is not to evade the Caesar sanctions, but rather a step in building trust between the conflicting forces, and paving the way for a future settlement.

One of the gains of connecting the NES-controlled areas with the Russian-backed Syrian regime areas is to facilitate trade and removal of obstacles. Shaar highlighted that the greatest beneficiary of this trade will be the highest productive party, which is the Syrian regime.

The Syrian regime still can produce goods in Syria that are not manufactured by other parties, from which they certainly buy these goods.

Shaar said that re-opening roads, in general, helps to improve the economic situation in all regions along the M4 highway, as well as the political situation, noting that “the intertwining between the parties economically leads to political liberalization.”

He reinforced his point by saying that the mutual trade taking place on the M4 highway between the areas of the NES and the areas controlled by the Syrian regime, will create a common link among members of the two regions, such as traders. Such people will defend their interests by maintaining this link and assisting in fortifying the economic situation.

Shaar sees that the NES has weakness in the economic side, as it practically produces only two types of commodities: the first is oil, and the second is agricultural. On the other hand, in the areas under the control of the Syrian regime, various commodities are made despite the significant damage to the production wheel. There are still factories that produce electric heaters in Aleppo, and this product, for example, is not made in other regions. Therefore, these regions need the products made in the Syrian regime-held areas.

No official figures or statistics are providing us with information about the volume of trade activities on the M4 highway, as the highway has been recently activated, the economic analyst Younis al-Karim stated.

Al-Karim expects that the M4 highway will contribute to mutual trading between Syria, Iraq, Iran, and even China.

Al-Karim believes that the M4 highway has economic importance for Russians because they can have access through it to the grain mills in the al-Jazira region.

Al-Karim emphasized that Russia has ambitions to transfer oil from the NES-held areas to the port of Latakia; Russia is anticipated to transfer  100,000 to 150,000 barrels of oil per day via land shipments.

The activation of the M4 highway has a role in encouraging regions, south of Turkey, in carrying out commercial activities, and here lies the Turkish benefit of allowing the road to be re-opened, according to Al-Karim.

Al-Karim said that the “M4” highway intersects with the “M5” one which he described as “the artery of Turkey” that runs in Syria, playing an essential role in exporting its products to the Arab countries.

Al-Karim added that Russia has plans to charge tolls on the M4 highway and since “the authority in Damascus does not exist, Russia and even Turkey will benefit from the revenues of this highway.”

Al-Karim predicts that the Russians will “impose protection fees” on this international road, and with the massive collapse of the Syrian pound, these fees are to be paid in the US dollar.

The political researcher at the Bridges Center for Studies Abdul-Wahab Assi considers that re-opening the main roads such as “M4” and “M5” for commercial traffic and the movement of transports between conflict areas in Syria needs guards and checkpoints, and not just patrols.

Accordingly, Assi believes that the repeated opposition from the US to Russia’s patrols does not mean at all its ability to disrupt the movement along the international road “M4”.

He continued that “Washington, originally, might not have a position regarding the re-opening of the highway.”

He reinforces his opinion by saying, “re-opening the M4 highway in northeastern Syria does not help much in ending the economic warfare waged against the Syrian regime, as much as it temporarily contributes to managing the collapse of the Syrian Pound.”

Regarding the convergence between Russia and the NES  in the issue of re-opening the highway, Assi believes that it is not the first of its kind, noting that the most prominent rapprochement took place during negotiations that brought the parties together, on 13 October 2019, in the Russian Khmeimim airbase, against the background of the Turkish military operation, east of the Euphrates in Syria.

Moscow is trying to achieve political gains from this step as well. Assi believes that Russia is counting on rapprochement with the NES  to create conditions for enhancing its presence in the east of the Euphrates, and allow communication with the elements working in the region, especially the Arab tribes.

He adds that Russia has worked earlier to strengthen its military presence on parts of the main international roads east and west of the Euphrates, whether, through negotiations or combat operations, Its current approach may confirm its ability to influence the future of commercial activity in the region and thus the reconstruction.

Recently Russia has been able to activate the eastern part of the M4 highway running from Latakia to al-Hasakeh. At the same time, it made significant progress in the western part that ends in Idlib, which is under the control of the opposition factions, by conducting joint patrols with Turkey, according to the agreement inked between Moscow and Ankara on five last March. 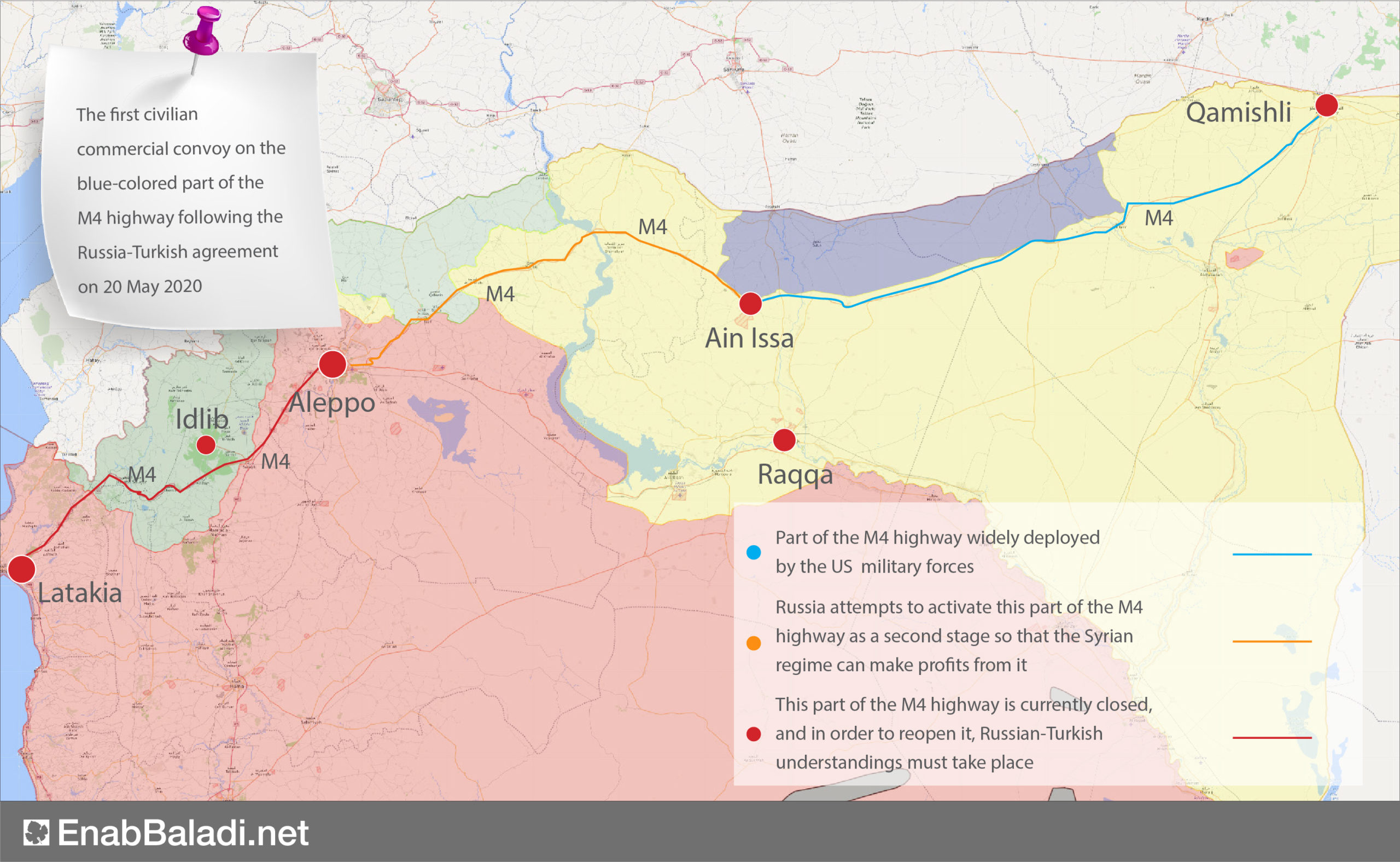