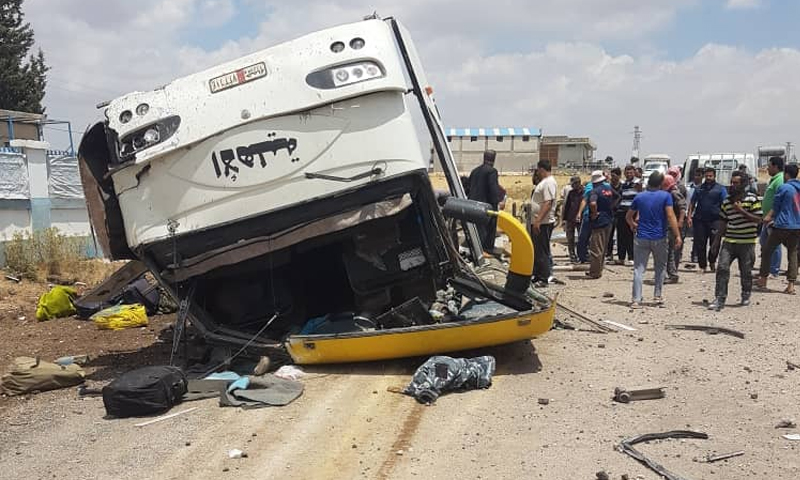 The “Fifth Corps,” which is considered the military arm of the Russians in Syria, has come once again to the forefront in the last few weeks, through its attempts to expand its influence in southern Syria or by carrying out attacks against its forces by unknown persons.

Since the Syrian regime forces retook control of the southern region under “settlement” agreements with the factions of “the Free Syrian Army/FSA” in 2018, Russia has opened the door for the “reconciliation elements” to join the “Fifth Corps,” and handed over its command to Ahmed al-Awda, a former FSA leader.

Many of the “settlement” elements, who were affiliated with the opposition factions, preferred to join the ranks of the “Fifth Corps,” as a better option among the available ones represented by leaving the province for northern Syria or to join the Syrian regime forces and their military formations, especially the Fourth Armored Division, an elite combat unit of the Syrian regime forces.

The corps is trying to expand its influence in the southern region, with the decline of other parties’ role, especially the central committees, which ruled out negotiations with the Syrian regime forces with a Russia guarantee. As a result, they got warranties within the “settlement agreement” in July 2018.

The Fifth Corps opened registration in its ranks to all fighters, during the past two weeks, where more than 400 people from Quneitra and Yarmouk Basin in Daraa countryside joined, according to the correspondent of Enab Baladi in the region, who indicated that most of the volunteers are dissidents and evaders of compulsory military service.

Enab Baladi also learned from sources in Daraa, who spoke on condition of anonymity, that the leader of the “Fifth Corps”, Ahmed al-Awda, held a meeting two weeks ago without the knowledge of the central committee’ members and without their presence, during which al-Awda invited soldiers who defected from the regime forces in the entire province of Daraa to join his ranks. This is unacceptable by the central committee.

A hidden struggle is taking place between the “Fourth Armored Division” and the “Fifth Corps” over power-sharing in southern Syria. Both attempt to attract dissidents to be among their ranks, to expand influence and control, especially after the “Fifth Corps” has proven its influence on the ground during the past months in terms of security.

The areas under its control, such as Busra al-Sham, are relatively safe, unlike other regions where kidnappings, theft, and assassinations are active.

In a previous interview with Enab Baladi, the specialist in the dynamics of southern Syria and the researcher at the European University Institute and the Middle East Institute, Abdullah al-Jabassini believed that the scenario of defectors joining al-Awda’s ranks guarantees that the regime will not carry out any military operation against Daraa, because it will be under his protection. Al-Jabassini added that the civilians will welcome this scenario for two reasons: the first is that it will save the region from military operations. The second is that the people want stability and security, which are experienced by al-Awada’s eastern part in the governorate.

In light of the attempt to expand its control, the “Fifth Corps” was attacked on 20 June by an anonymous party.

An explosive device has exploded in an “overnight” bus belonging to “the Fifth Corps” on the al-Kahil-al-Sahwh road in the eastern countryside of Daraa, killing eight fighters and wounding more than 20 others who were taken to the hospital of al-Busra, according to Enab Baladi’s correspondent. The correspondent said that the bus was transporting fighters from Latakia to Daraa to exchange their shifts.

For his part, the correspondent of Sama TV, a pro-government television channel, Firas al-Ahmad, confirmed that the overnight bus contained about 40 people, most of whom were killed and wounded, noting that the explosion caused significant damage to the place.

Russia is trying to grant “the Fifth Corps” extensive powers in order to coordinate and control security arrangements in the areas of its control, in addition to preventing the incursion of other military forces, including the Syrian regime forces in southern Syria.  Furthermore, Russia is trying to gain a large military force in southern Syria under one command in Daraa and Quneitra, and stop the Iranian penetration in the region.