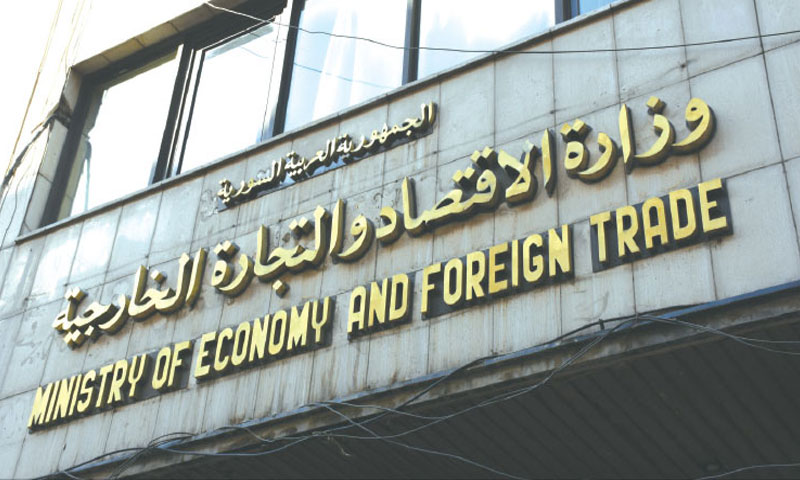 The Syrian regime government has been taking measures to kick-start its shattered economy that was adversely affected by several factors. Most prominent of these factors are the US and European sanctions, the lack of exports, the impact of the novel coronavirus (COVID-19) pandemic on the economy, and the “Caesar” Act, that will soon come into force.

Added to these factors is the recent dispute between the regime’s government and Rami Makhlouf, a wealthy Syrian businessman and the maternal cousin of Syrian regime president Bashar al-Assad.

These factors caused a dramatic decline in the value of the Syrian Pound (SYP) against foreign currencies, as the exchange rate of the US dollar amounted to 2,000 SYP per dollar, leading to a substantial increase in commodity prices.

Meanwhile, the Ministry of Economy and Foreign Trade of the Syrian regime’s government regularly launches import substitution industrialization (IS) programs in an attempt to reduce the foreign-exchange bill, protect the domestic industry, achieve self-sufficiency, and create investment opportunities.

The regime’s government has recently announced its intention to support various sectors and projects with”benefits and incentives” system to encourage investment in those sectors.

The recent “import substitution (IS)” program, launched by Syria’s Ministry of Economy and other relevant institutions on 17 May, includes 67 items and sectors.

The most prominent of these items are generic and imported medicines, food and pharmaceutical supplements, powdered milk, and baby formula. The IS program also covers items of animal feed yellow field corn, sesame, agricultural seeds, and many other products.

As for the sectors included by the IS program, they vary between medical, textile, poultry, paper, and many more.

On 21 May, Syria’s Ministry of Economy announced, through its Facebook account, a package of incentives that aimed to reduce customs duties on some production inputs. It also imposed “protective economic measures” against the competition of similar imported goods and commodities.

The incentives ensured the facilitation of receiving necessary means to initiate projects.

Besides, the ministry proposed the possibility of including some sectors in its export incentives in the future.

As by the special benefits, investors are not required to pay the first installment, they are given a “grace” period until the beginning of production. The benefits increased the duration of installment fulfillment to 20 years, reducing the burden and cost of obtaining financing through the interest-rate support program.

Nevertheless, the ministry noted that not all facilities will have “land allocation” advantages and that these benefits are subject to “considerations of how much the sector needs more new or alternative facilities than the completely damaged ones.”

The Ministry of Economy also declared that 25 loan interest programs for the IS plan would be subsidized, with 7 percent of the rate set on loans.

Syria’s Ministry of Economy and Foreign Trade aims through the IS program to move toward further “self-reliance” within the economic policies.

The ministry aims to reduce the demand for foreign currencies resulting from import need, secure the production of some materials and goods locally, and create new investment opportunities with distinct government incentives.

Furthermore, the implementation of the IS program will lead to the investment of available resources and create job opportunities, thereby generating income sources for citizens.

Provision of foreign exchange is essential

The Syrian economic researcher Marouf al-Khalaf believes that these incentives are “absolutely useless,” given the “disastrous” situation of Syria’s economy over the last ten years.

In an interview with Enab Baladi, he said that in comparison with the experiences of most developing countries that implemented the IS strategy, the most obvious vulnerability within the strategy was its inability to provide more foreign currency.

The foreign currency is needed for the import of capital goods such as machinery and equipment, which most developing countries are in desperate need to import them from abroad because these countries are unable to manufacture them domestically, said al-Khalaf.

He added that providing foreign exchange is one of the most prominent factors that has led to the failure of many “import substitution”-based experiments, especially in the 1970s and 1980s, even in countries that have come a long way in this strategy, such as Mexico, Brazil, Argentina, and India.

Al-Khalaf pointed out that the IS program is in urgent need of foreign-currency reserves. He said contrary to what many believe, most of the imports are production inputs, not goods for final consumption.

The negative aspect of the IS strategy centers on the inability of domestic industries to exceed the production stage of consumption goods to capital goods.

When industries are limited to consumer goods only, imported primary capital goods, used to produce these consumer goods, will rise.

This leads to a deterioration in the import balance due to the increasing demand for essential commodities used in the consumer goods industry, according to the researcher.

Al-Khalaf thinks the regime’s resort to this strategy would create uncompetitive industries and lower product quality.

Thus, smuggled goods will easily find their way to local markets, for consumers will demand higher-quality goods, especially for durable or high-priced goods.

Al-Khalaf added that some products could not be replaced entirely, for it is not only related to product availability but also consumer behavior.

He indicated that the demand for a particular product or brand would not stop, even if thousands of local factories producing this product were available.

The period of protectionist actions also plays a vital role in the success of this strategy, which can be achieved in the short term; however, its continuation will cause the failure of markets in the medium-term and the growth of monopolistic practices.

Those practices would become an irreversible right for manufacturers after some time.

Al-Khalaf concludes by saying that these measures will last for a long time in light of the regime’s current situation, leading to its fall into the trap of market failure and monopolists’ control, as per his expression.