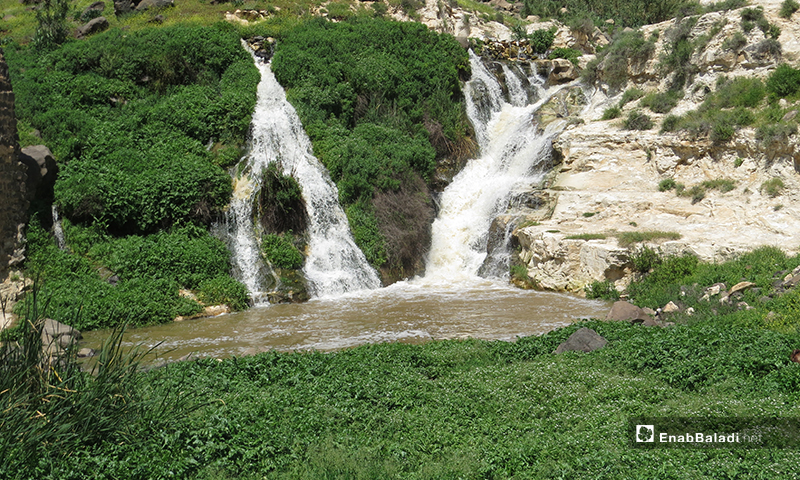 The domestic tourism in Syria’s southern province of Daraa is seeing a staggering decline, compared to last year, mainly due to the drought caused by the random drilling of wells and the indiscriminate drawing of groundwater, in addition to the measures taken to stem the spread of the deadly coronavirus, officially known as COVID-19.

On such warm spring days, the residents of Daraa used to spend their vacations, visiting cliffs, waterfalls, and lakes in the countryside of Daraa. Still, this year the number of people visiting these beautiful touristic places has decreased significantly.

The western region of the province is characterized by the abundance of lakes, and springs. It is also regarded as a tourist destination for the residents of Daraa province and neighboring provinces, where visitors spend their time sitting under eucalyptus trees in addition to swimming and boating.

The most important tourist areas in Daraa are Muzayrib, Tell Shihab Waterfalls, the lake and waterfalls of Zizoun, springs of al-Ashari, and al-Ajami.

The waters of  Muzayrib Lake, Zizoun Lake, and Tell Shihab Waterfalls recede gradually during the dry season, which is limited to summer as drought occurs only in summer while the water levels of springs and lakes return to normal during winter.

The flow of water in Muzayrib Lake returned to 80 percent of its natural level,  at the beginning of the current year, due to the heavy rainfalls.

However, this would not stop the drying up of the lakes and springs of the province in summer due to the existence of the illegally drilled wells and the severe depletion of groundwater resources, the Director of Water Resources in Daraa province, Mohammed Munir al-Odeh said in a statement which was reported by Al-Baath, a government-owned newspaper.

Furthermore, drawing water from the source of those springs through “diesel” pumps installed by farmers to irrigate their crops, cause the contamination of drinking water resources and noise and unwanted disturbances to the visitors.

In an interview with Enab Baladi, an agricultural engineer, speaking on the condition of anonymity, said that the lakes of Muzayrib and Zizoun and the waterfalls of Tell Shihab dried up significantly over the past two years.

The engineer attributed the causes of the drought to the random and intensive drilling of groundwater wells, which deeply affected the course of those springs and led to their drought mostly at the height of watering crops, before being refilled in winter with rain.

The Syrian regime regain control over the region in July 2018; yet, the process of drilling water wells is still proceeding, bringing the total number of random wells in the province to three thousand wells in the past year, according to “al-Baath” governmental newspaper.

The number of wells is expected to have increased in the current year amid the ongoing drilling process. The agricultural engineer estimates that water wells have risen to more than four thousand, destroying groundwater deposits, and negatively affecting spring-fed streams, as he put it.

The proportion of water stored in the 16 dams of the Daraa province, increased to approximately  50 percent this year, making good use of heavy rainfalls in the province.

Despite the high water levels in several areas, the touristic movement was not revitalized in Daraa as expected during the spring. This is due to the imposition of weekend COVID-19 curfews in Daraa (Fridays and Saturdays), in addition to restricting the movement of people between the countryside and the city, and between the provinces.

The province of Daraa recorded one coronavirus infection, which recovered on 2 May as announced by the Syrian regime’s Ministry of Health.

The town of Muzayrib was witnessing a high turnout of tourists on Fridays and Saturdays at this time of year, but this year people were committed to staying at home and “there have not been massive crowds of people in the town for fear of the coronavirus infection,” Abu Hassan, a resident of the town told Enab Baladi.

Abu Hassan added, “the month of Ramadan is also seeing a light tourist movement because people follow special rituals and practices in the holy month.”

Tourism is a source of sustainable livelihood for many residents of the region, as they invest in cafes overlooking lakes and springs, and they rent their boats to tourists, while some of whom live on fishing.

In an interview with Enab Baladi, Abu Ahmad al-Rafie, a resident of Muzayrib town, said that the depletion of the lake in the past summer caused him and his fellow boat-owners a material loss.

Al-Rafie has a boat that supports him financially by renting it to tourists, but his work was limited to the presence of water in the lake, which runs until the beginning of summer only.

As for Imad al-Khair, who owns a fish store, he told Enab Baladi that “the desiccation of the Muzayrib Lake over the past year has eliminated fisheries,” expecting that fish farming will not return to the lake soon.