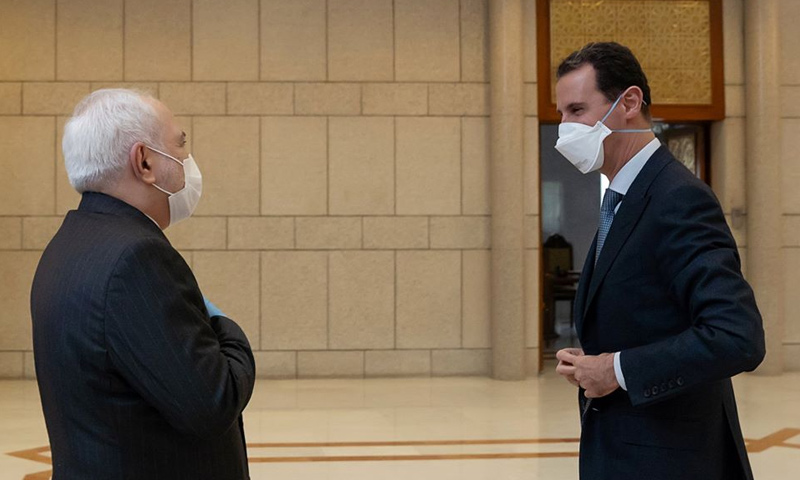 At a time when diplomats and world leaders are refraining from leaving their countries and only governing through virtual meetings for fear of contracting coronavirus (COVID-19), the plane of the Iranian Foreign Minister, Javad Zarif, landed in Damascus to meet with senior officials of the Syrian regime face to face.  Tehran does not trust online interviews, the Syrian journalist Nasr al-Youssef, who previously worked at the Russian “TASS” agency, said.

On 20 April, Zarif met Bashar al-Assad in an atmosphere in which the protective face masks failed to hide the usual welcome smiles, as the two parties know well about the spread of the coronavirus in their countries.

Despite the coronavirus risks, the leader of Iranian diplomacy came to Damascus at this critical time, which means that his visit must carry highly essential messages, especially as it coincides with high profile issues taking place in Syria. The most prominent issue is that Russia’s leading journalism organizations, some of which are in direct contact with Kremlin decision-makers, lead a severe defamation campaign targeting the corruption of the Syrian regime.

Khattar Abou Diab, a Lebanese political analyst, professor of Political Science at the Sorbonne (Paris III) and geopolitics expert, believes that the last days revealed a contradiction between the supporters of the Syrian regime (Russia and Iran), He explained that this contradiction was translated by the Russian press campaign against the regime, as it reflects necessarily about the beginning of Russian restlessness from the Syrian regime.

From Zarif’s visit to al-Assad at this time despite the spread of the coronavirus pandemic, we can conclude that Iran, as usual, wants to give the regime an injection of morale when it is stuck in a difficult situation, in addition to that it is an attempt to highlight its capabilities in Syria, according to Abou Diab.

It seems that the support is not limited only to morale, as “The National,” an American news website, reported that the Syrian-regime run cargo jet fleet that the US  believes is carrying weapons from Iran resumed deliveries after a temporary halt due to the outbreak of the COVID-19.

“The National” gathered some information from FlightRadar24, the world’s most popular flight tracking website, which showed that the “Ilyushin IL-76” jet, registered as YK-ATA, flew to Latakia from Tehran Mehrabad International Airport, which is used by the Iranian Air Force, on 20 April.

For his part, Saad Wafai, a senior consultant and Syrian politician in international relations, believes that Russia’s publication of files about the rampant corruption in the Syrian regime is a sign of its lack of adherence to the people of the regime, including Bashar al-Assad.

The visit of a high-ranking Iranian official, such as Javad Zarif, to Damascus, has been understood as a new arrangement of the Iranian papers in Syria after the coronavirus, bypassing the daily policies of Iran in Syria since 2011, according to Wafai’s expression in an interview with Enab Baladi.

Iranian concern about its interests in Syria

Zarif’s surprise visit comes in light of the continued ceasefire in Idlib agreed between Russia and Turkey, on the 5th of last March, amid the attempts of the Syrian regime and the Iranian militias to violate the ceasefire. In contrast, Turkey and Russia ensure that this ceasefire holds.

On this point, Abou Diab considered that there is a significant concern both by Iran and the Syrian regime towards the Russian-Turkish understandings, which are becoming more and more prominent in the northwest and northeastern Syria.

He added that there is a great deal of fear that the US will be part of these understandings, which puts the Iranian presence in Syria in the eye of the storm, especially as Israel is working to undermine it.

Read also: Iran is absent from political agreements but present in Idlib battles.

Abou Diab pointed out that Iran has its own methods to disrupt the Russian-Turkish understandings.

He gave an example of this that Tehran is triggering the so-called Islamic State “IS” to carry out some minor attacks in some areas in order to shuffle the cards, stressing that Iran, like the Syrian regime, resorts to using the scarecrow of terror, to continue to control by showing tensions.

Saad Wafai, for his part, said that Iran has invested a lot of money in Syria, and that is why it fears losing its investment in this country.

Bashar al-Assad used the meeting with the Iranian foreign minister to attack the Turkish presence verbally in Syria, which reflects some of what Javad Zarif carried on his sleeve to Damascus.

During the meeting, al-Assad described the Turkish intervention as “aggression, through its direct occupation of the Syrian territories or by increasing the number of what it calls observation posts.”

Al-Assad considered that “Turkey’s actions on the ground expose its true intentions by not adhering to the agreements it concluded either in Astana or in Sochi, which all provide for recognition of the sovereignty and territorial integrity of Syria.”

For his part, Recep Tayyip Erdoğan did not wait long, as he responded to al-Assad with a series of threats and warnings if he continued his attempts to violate the ceasefire agreement in Idlib.

Erdoğan stressed that Turkey remains committed to the memorandum of understanding it concluded with Russia, but at the same time will not tolerate any attack on Turkish troops and any regime aggression.

One day after Zarif visited Damascus, Russian President Vladimir Putin made two separate calls to the presidents of Turkey and Iran.

According to a statement of the Kremlin, Putin discussed with his Turkish counterpart, Recep Tayyip Erdoğan, the implementation of the Idlib agreement, and stressed the need for the continuation and effectiveness of cooperation between the two countries through military and diplomatic channels, and maintaining contacts.

Putin made another call with his Iranian counterpart, Hassan Rouhani, and stressed the possibility of further consultations in “Astana” meetings.

According to a statement by the Iranian presidency, the two sides stressed the importance of continued Iranian-Russian consultations on regional and international issues, including following up on the “Astana” process and holding trilateral talks with Turkey at the highest level.

The three countries set the date of 22 April for their foreign ministers’ meeting, using video technology, to discuss the latest developments in Syria, in what is known as the “Astana” formula.