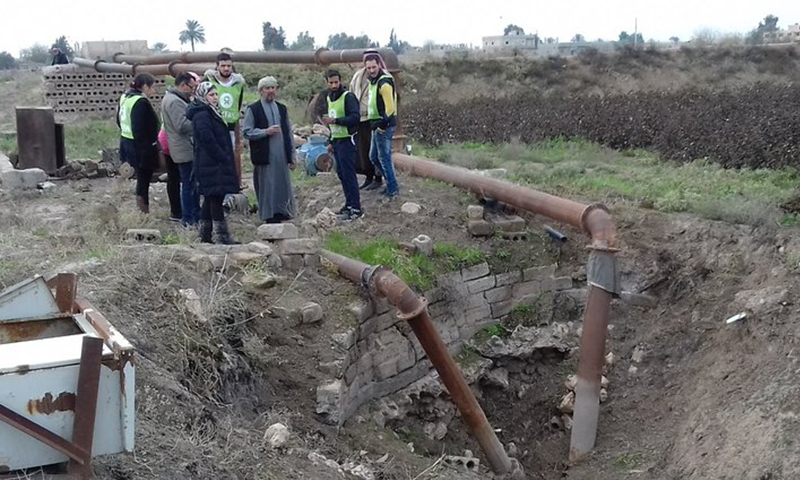 Despite being the first source of oil in Syria, agricultural lands in the governorate of Deir Ezzor in eastern Syria suffer from drought, because farmers are unable to secure the fuel needed for irrigating those lands.

Residents of al-Samaa neighborhood in the town of Gharanij, located in the eastern countryside of Deir Ezzor, suffer from the lack of irrigation water for their fields since last February, which led to crops’ damage, especially wheat, the main food crop in the area.

Enab Baladi interviewed some of the farmers in Gharanij town, which is under the control of the “Syrian Democratic Forces” (SDF), who said that irrigation water was cut off from the irrigation channels because of the lack of diesel fuel while pumps need generators and maintenance.

Khaled al-Abdullah, one of the town farmers’, talked to Enab Baladi about pumps and said, these pumps work for a day, not even enough to fill the main irrigation channel before they run out of diesel fuel and stop working for a whole week or two.

Since February, town’s residents have been calling on the officials of the Agricultural Committee of the Civil Council in Deir Ezzor to solve the matter and save their yields.

Meanwhile, the committee responsible for operating irrigation water says there is a kind of procrastination in providing dues for pumps’ maintenance as well as for the replacement of their parts.

The committee proceeded to say that the finance department responsible for irrigation issue invoices in the name of the committee without the latter’s ability to disburse any of them, which led to an accumulation of debts upon the committee.

After numerous requests and repeated complaints by al-Samaa neighborhood residents, a group of farmers in the area had contacted and exerted pressure on the Agricultural Committee, has sent complete disclosure statements regarding the diesel fuel allocated for the neighborhood farmers.

These statements gave detailed explanations within a schedule that included recipients’ names, dates, and the provided quantities, as well as the name of stations of which fuel was received.

According to the schedule, diesel fuel supplies arrive regularly in this town; however, “they are being stolen,” according to some farmers interviewed by Enab Baladi, who pointed fingers at whom they described as ‘influential people” in the town.

Deir Ezzor contains “al-Omar oil field,” the largest oil field in Syria, which is located 15 Km east al-Basira town in the countryside of the governorate controlled by the US-backed SDF since 2017.

In addition to “Tanak oil field,” the second-largest field after the “al-Omar”, located in al-Shuaitat desert in the eastern countryside of Deir Ezzor.

Followed by a number of oil fields such as “al-Ward,” “al-Taim,” “al-Tabiya,” “al-Mahash oil field,” “Nishan,” “al-Jafra,” and the “T2” pumping station, located on the Iraqi-Syrian oil line.

The governorate also includes a number of plants for compressing and filling gas, such as the Conoco Gas Plant, 20 Km east of Deir Ezzor, along with a number of oil pumping and storage stations, such as “al-Kharata” station, located 20 Km away southwest Deir Ezzor.

The oil and gas industry is considered one of the main sources of the Syrian regime’s government’s revenues, despite its limited reserves in this sector compared with other Middle East countries.

In 2017, SDF started gaining control over the main oil fields in Deir Ezzor along the Euphrates River, previously seized by the so-called Islamic State (IS)militants.

SDF forces were able to repair some of the damage the infrastructure of these oil fields had, to partly restore production.