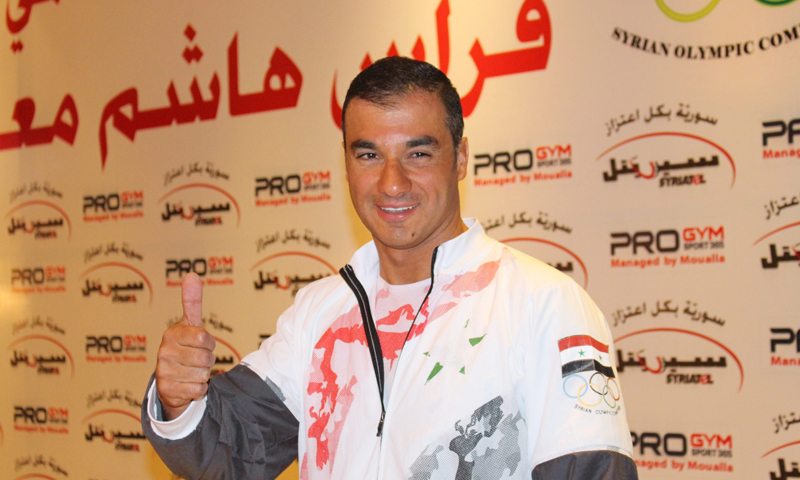 The Syrian swimmer, Firas Mualla, was elected as head of the General Sports Federation, the highest sports authority in Syria that parallels the Ministry of Sports in other countries. Mualla won the election held on 17 February after defeating the previous Chairman of the Federation, Muwafaq Juma.

Mualla is known as a famous Syrian swimmer who received tens of medals in various sports competitions. At every possible occasion, Mualla announces his loyalty and public support to the head of the Syrian regime, Bashar al-Assad.

Mualla has a strong connection with al-Assad, who met with him several times and honored him two times in 2002 and 2007. He is the son of Hashem Mualla, one of the al-Assad’s officers accused of involvement in the Hama massacre in the 1980s. He also owns many sport-related economic investments with his brother, Humam.

Humam Mualla was the head of the Arab Triathlon Confederation (ATC) until 2012.  However, Mualla resigned in protest against the Arab conspiracies targeting Syria’s stability, according to the pro-regime local radio “Sham FM” on 30 January 2012.

He also praised the army of the Syrian regime several times during his interviews with various media outlets.

On the other hand, Humam Mualla focused on sports investments and founded three companies in 2015: “Top Sports Forum,” “the Seville Fort for Sports,” and “the Dream of a Modern Vision.”

The three companies share the same amount of capital, which is a million Syrian Pounds (956 USD). The three companies are located in the province of Rif Dimashq. These companies which exclusively specialize in sports-related activities were founded by the same group of people: Humam and Ghaydaa Mualla, Yaser al-Asaad, Hanadi Fayez al-Naser. However, Firas’s name is not linked to these investments.

Moreover, the sports investments owned by the Mualla family are not limited to sports companies, but also on other investments.

Sports investments and Mualla’s fame in the Arab world and Syria have opened doors of opportunities to Firas Mualla, and he used his connections and public relations to take over the highest sports executive authority in Syria.

Firas Mualla’s connections go beyond Syria, he represented the Russian Federation in a competition after he joined the Russian Kuban Club in 2019 as an exception authorized by the head of the Syrian regime, al-Assad. He won the gold medal at the 5km open water competition at the European Masters Championships held in Slovenia, according to the state-run Syrian Arab News Agency (SANA) on 9 September 2018.