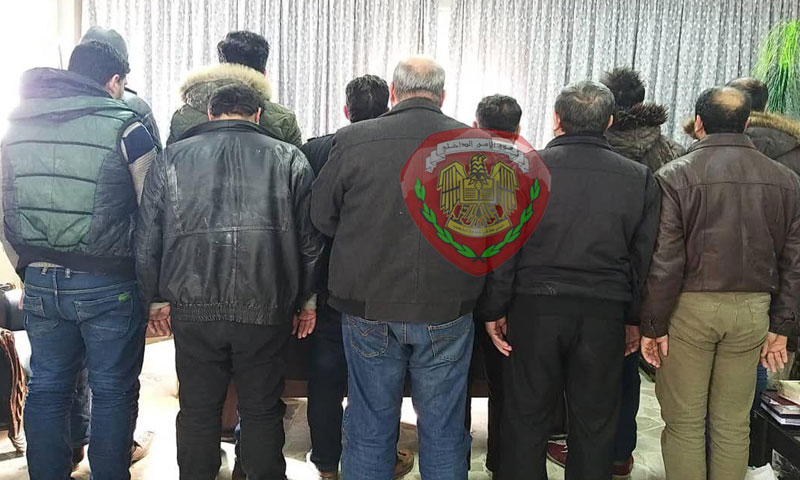 The arrest of people in Aleppo on charges of dealing in non-Syrian currencies - February 6, 2020 (Syrian Ministry of Interior) 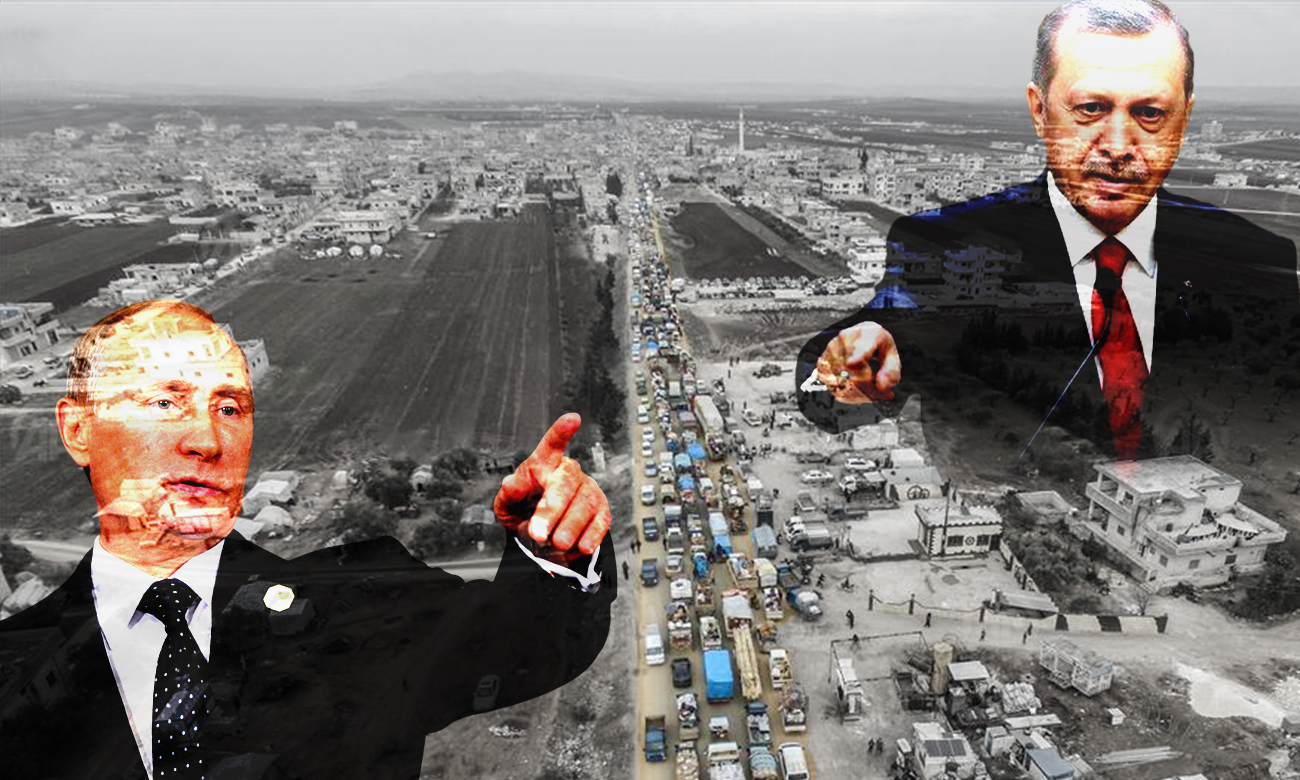 Criminal security patrols launched Intensive campaigns in various regime-held areas, in search of dealers in currencies other than the Syrian Pound, in implementation of recent decrees and decisions that tightened penalties on non-Syrian currency dealers.

Abu Muhammad, a pseudonym used by his family for safety reasons, living in the city of Aleppo and a middle-income trader, was recently arrested on charges of dealing in dollars.

A source close to Abu Muhammad told Enab Baladi that he used to carry out some of his dealings in the US currency, frequently travels outside Syria to buy and import goods, and keeps limited amounts of foreign exchange in his place located in the center of the city of Aleppo.

After Bashar al-Assad issued decrees “3” and “4” on January 18, tightening the penalties on non-Syrian currency dealers, the trader kept the sums he owns. As a result, his shop was raided by the Criminal Security officers, and he was arrested along with a group of people who have no connection with the matter, including a guest who was on a surprise visit to him.

All the money in the shop was confiscated from him and from those who were with him in the shop, whether in the Syrian Pound or foreign currencies. The Ministry of Interior then published that it had arrested a group of non-Syrian currency dealers, who contributed to weakening the Syrian Pound.

According to his relatives, Abu Muhammad is still waiting for trial, and they believe that they are obliged to sell a house they own to pay bribes that they heard may contribute to reducing the sentence and preventing his imprisonment under the law.

On the official Facebook page of the Syrian Ministry of Interior, Enab Baladi monitored that the Criminal Security patrols arrested people and closed clothing, furniture, grocery stores, and real estate offices on charges of dealing in dollars, in Damascus and its countryside, Latakia, Hama, Deir ez-Zor and Aleppo.

On February 6, the police station in Maysalun, Aleppo, arrested 11 people on charges of buying and selling threads and fabric in non-Syrian currencies and confiscated more than six million Syrian Pounds, some foreign currency, a laptop, and documents.

Followers condemned the publication of the Ministry of Interior on Facebook about the confiscation of money in the Syrian Pound. At the same time, a user commented that the threads and fabric are non-subsidized materials by the Central Bank, and, typically, the payment process is made in dollars in their import.

On February 4, the Ministry of Interior published that its patrols arrested the owner of a store that sells fabrics and furnishings in al-Hariqa area in Damascus, a merchant who sells ready-made clothes in al-Zahra area, and an owner of a real estate office in the commercial sector, on charges of dealing in dollars.

There were adverse reactions on the post, as commentators condemned the government’s “pursuit of small merchants while neglecting major merchants.”

Among those affected by the campaigns against non-Syrian currency dealers was the Golden Line Art Production Company, on January 28. The Ministry of Interior closed the company’s offices in Damascus with red wax, confiscated its properties, and arrested the owner of the company, Nayef al-Ahmar, and director Fadi Salim.

Nayef al-Ahmar’s wife, Diala al-Ahmar, said in an interview with Al-Madina FM radio station that since the issuance of the latest decrees against the dollar dealers, the company had not made any transfer or payment processes, and no receipt proves the violation of the order.

Diala wondered about the selling of the state-owned GE for Television & Radio Production of its television works to TV companies in US dollars, indicating that Arab artists working with the company receive their dues in US dollars.

Previous arrest campaigns under the pretext of dealing in dollars

In the implementation of the decree, the security services had been active in arresting non-Syrian currency dealers, including unlicensed money exchange companies and money changers.

Among those arrested was a person named Hamdi al-Khatib, who was arrested in 2013. He used to work as a money changer in the al-Hariqa area, ​​Damascus, and the Criminal Security officers arrested him on charges of manipulating the exchange rate of the Syrian Pound and harming the Syrian economy.

In 2014, 34 people were arrested on charges of manipulating exchange rates in the black market.

Enab Baladi documented the arrest of a family who lived in the Rukn Al-Din neighborhood, next to Abu Al-Noor complex and earned $ 30,000 from selling their house earlier. The housewife withdraws $ 300 every month from an ATM in al-Hariqa area, to secure the family’s expenses.

Hours after withdrawing the money from the ATM in al-Harika area, a State Security patrol of ten elements in three cars raided the family’s house

The patrol arrested the housewife, her two brothers, and her sister-in-law, and confiscated $ 26,000 and 200,000 Syrian Pounds. The detainees were taken to the State Security Department in the White Bridge, then to the Khateeb branch a week later, where they remained under custody for three months.

Thanks to the intervention of several mediators and after paying four million Syrian Pounds, the family members were transferred to Adra prison, and the second judge in Damascus decided to release them.

Have the central bank safes been emptied of foreign currency?

The former governor of the Central Bank of Syria, Mohamed Hamra, said in a statement to the local newspaper, Al-Watan, on September 18, 2019, that the Central Bank of Syria took the decision not to pump a single dollar into the market, as former officials used to do, adding that all the bank’s resources will be allocated to finance the state and essential goods.

The Central Bank of Syria used to pump amounts of dollars into the market, following the policy of controlling and recovering the value of the local currency, in addition to trying to control the sharp rises of foreign currencies against the Syrian Pound.

To face the decrease in the number of foreign currency reserves, the Central Bank of Syria issued a circular on January 21, 2019, asking citizens to sell dollars to the bank at a preferential price of 700 Syrian Pounds against one dollar, without the need for documents.

In a previous statement to Enab Baladi, the head of the Syrian Economic Working Group, Dr. Osama al-Qadi, described the recent decrees issued by the regime and the decisions related to tightening sanctions against non-Syrian currency dealers as hysterical, while indicating that the economic decision-maker in Syria “has completely lost balance.”

Al-Qadi stressed that to ease the “disastrous” condition of the Syrian economy, the concerned parties in Syria must establish a political solution that restores sovereignty over the border crossings, oil, and agricultural lands.

Regarding the reserve of foreign currency in Syria, al-Qadi said that “the Central Bank’s treasury has been emptied from a foreign currency, and there are only about 200 million dollars left in it, which is a very insignificant amount.”

Decrees No. 3 and 4, issued by al-Assad on January 18, stipulated harsher penalties against non-Syrian currency dealers.

According to the new decree, every person who deals in a currency other than the Syrian Pound as a means of payment “shall be punished by imprisonment with temporary hard labor for no less than seven years,” and shall pay “a fine equivalent to twice the value of the payments, the amount involved or paid, as well as the services or goods offered;” in addition to confiscating the payments, sums involved, or precious metals for the benefit of the Central Bank of Syria.

Decree No. 4 imposes a penalty of temporary detention and a fine of one to five million Syrian Pounds, “for everyone who has circulated, published or republished, fabricated facts or false or fake allegations by any means, to depress and destabilize the value of the national currency or exchange rates specified in the official bulletins, or to undermine confidence in the reliability of the country’s currency and bonds.

The issuance of the decrees coincided with a warning issued by the Ministry of Interior against dealing in currencies other than the Syrian Pound. The Ministry confirmed, via its official Facebook page, on January 17, the intensification of its patrols to monitor companies, shops, and individuals, in an attempt to curb the phenomenon and arrest violators.