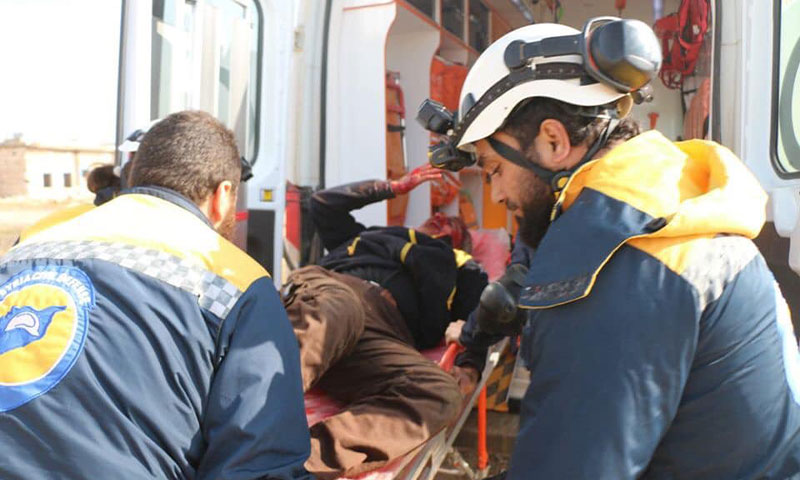 In a statement released on Tuesday, 28 January, the White Helmets in Idlib mourned the death of the volunteer “Othman al-Othman.

With broken hearts, we mourn the death of the volunteer "Othman Al-Othman" while his two teammates suffered injuries as a result of being targeted by regime planes after shelling stormed the village of Sarjah in southern #Idlib after midnight. He will be sadly missed. pic.twitter.com/oPSOYI9WTY

Al-Othman, who was rescuing and evacuating the trapped civilians, was killed in an airstrike carried out by the Syrian regime warplanes in the rebel-held village of Sarjeh in the southern countryside of Idlib on 27 January.

The White Helmets posted a video showing al-Othman’s burial procedures in his town in the Jabal al-Zawiya area and the participation of his colleagues at the funeral.

The correspondent of Enab Baladi in the province of Idlib reported on 27 January, that the Syrian regime forces established control over the rebel-held towns lying on the M5 international highway: al-Za’lanah, al-Dana, Babila, al-Sawamea, Tell al-Sheikh, Maasaran, and Roadko area, south of Khan al-Sabil.

The Syrian Response Coordinators Group (SRCG) documented the displacement of more than 10,000 families from the cities of Ariha, Saraqib and Khan al-Sabil during the last 48 hours following the regime’s rapid advancement.

The SRCG called on humanitarian organizations, bodies, actors to address the urgent humanitarian needs of those displaced in the area, demanding the authorities concerned with Syrian affairs to intervene directly to stop targeting civilians in Idlib province and its surrounding areas.

"Daddy.. Daddy, please let me see him!" These desperate words burned our hearts from the children of our fallen hero, Othman, after we lost him yesterday when regime warplanes targeted his team during their humanitarian duty to save civilians in #Idlib countryside. pic.twitter.com/0T6ZKMSaPS