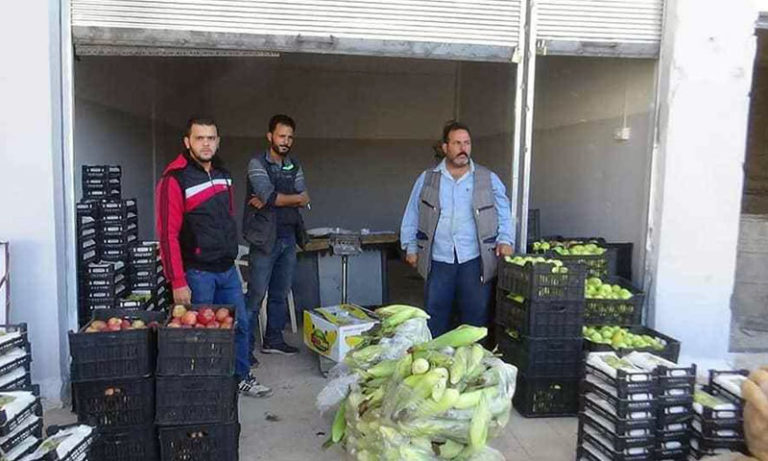 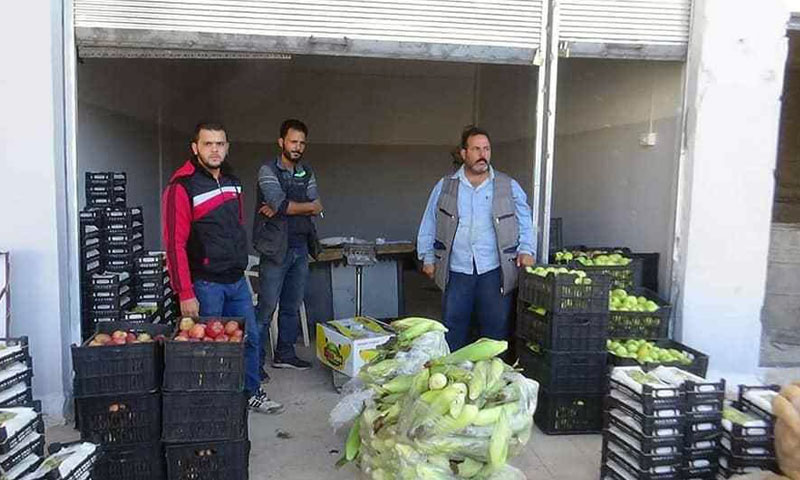 Daraa – Halim al-Mohammad | The Syrian regime’s attempts to restore commercial life to Souq al-Hal wholesale market in the center of Daraa failed despite the habilitation operations and media marketing, making Tafas market the first commercial center for merchants and farmers in the governorate.

Daraa City Council opened Souq al-Hal Market in early November, after the shop owners were obliged to renovate their shops and resume work, pointing to a legal accountability in case of violation.

Despite the regime’s efforts to bring commercial life back to the market, the latter has not witnessed a good turnout by merchants, customers and even farmers, leaving most stores closed due to fears of poor purchasing movement and expected theft.

In contrast, Souq al-Hal Market in the city of Tafas in Daraa countryside kept on absorbing most of the agricultural production in the governorate, and remained a source of purchase, distribution and even export to the capital Damascus.

Souq al-Hal Market is located in the market area in the center of Daraa, an area that has been devastated during the battles that the regime fought in previous years. The area contains checkpoints belonging to the security services, which are known for their “bad” reputation in dealing with the residents.

Pressures to rehabilitate the market

Through its media outlets and security services, the regime tried to pressure Daraa merchants to return Souq al-Hal Market to its normal situation and revitalize the commercial movement there, after obliging shop owners to rehabilitate and reopen their stores at their own expense.

Daraa City Council warned in the ultimatum that any failure to meet the deadline would expose the merchant to legal accountability.

The governor of Daraa, Khaled al-Hanous, spoke in an earlier interview with the Syrian News Channel during the opening of Souq al-Hal, saying that the area was a line of contact between the regime forces and the camp front, and this led to great destruction in the region, expecting a greater turnout to the market in the upcoming days.

Failure to reopen the market

As for the trade movement and the merchants and farmers’ turnout to the market, Abu Osama said: “I expect the movement to be very light, because the regime’s checkpoints, especially those affiliated to the air force and known for their bad dealing with citizens, the large number of checkpoints and inspections and lack of movement at night, are factors hindering trade movement and the exchange of vegetables and fruits from Daraa market and other markets in the governorates.”

In contrast, farmer Rashdan al-Ahmad, 35, says that farmers currently prefer Souq al-Hal Market in the city of Tafas over the city market. He explained that the movement in Daraa market is still very weak, most of the shops are still closed and shipping merchants do not want to go to the market because of the activity in Tafas Market.

Al-Ahmad, a farmer from the western region, adds that the security checkpoints hinder access to the city center, obliging farmers to head to the Tafas market to escape the regime’s checkpoints and traffic violations, making Tafas a destination for them, especially with the export of their products to the capital Damascus.

“I am interested in buying vegetables and fruits at the lowest possible price, and at the same time I make sure to buy excellent quality products. We, thus, go to Souq al-Hal Market in Tafas for two reasons: the first is the abundance of goods giving us more choices, and the second is price competition among merchants in Tafas market as it is a destination for farmers’ production,” said Abu Mazen, a 30-year-old vegetable shop owner in Daraa market, to Enab Baladi.

Amer Ali, 40, a resident of the city of Daraa, told Enab Baladi that despite of the city Council’s attempts to rehabilitate Souq al-Hal and the industrial zone, the movement is still weak due to the destruction caused to the area, “and the fear of shop owners for their goods and equipment from theft and frequent checkpoints and security offices in the region.

“Despite the reopening and maintenance of Souq al-Hal in Daraa by the city Council, the turnout to the market of Tafas remains high, as it is located in a rural area and at the center of agricultural projects, in addition to the absence of the regime’s traffic police and checkpoints,” added Amer.

The Syrian regime has tried to return things in Daraa to pre-2011, especially within the city center, in a step to move the exceptional market it had previously established in al-Kashif residential neighborhood. The regime is trying to persuade craftsmen to get out of residential neighborhoods and go to the industrial area near Souq al-Hal in the city after it worked on their rehabilitation, restoration and maintenance.

The head of Daraa City council, Eng. Amin al-Omari, had previously talked to Syrian News Channel about the provision of all necessary services, such as water, electricity and infrastructure for Souq al-Hal, and that the Council is in the process of completing the maintenance. Ghassan al-Zamel, head of the General Electricity Company in Daraa, told the channel at the time that the expenses of electricity maintenance for Souq al-Hal in Dara amounted to four million Syrian Pounds.

Zamel clarified that the maintenance of electricity in the market included the installation of torsade cables, tightening of cords, distribution of boxes and cables for subscribers and counters, noting that the market’s transfer center is ready and that these works are being carried out under contracts with the Daraa city Council.

Daraa governorate has three main markets, the first of which is the city center market, in addition to the market of Tafas and the market of Nawa in the countryside of the governorate. Tafas market comes at the first place in terms of trade movement represented by the turnout of farmers, traders and others, and is characterized by its strategic location, as it is located in the middle of agricultural areas and commercial convoys use it as a starting point to reach the rest of the governorate’s areas.

With Russian support, the Syrian regime took control of Daraa Governorate in July 2018, ending opposition control there. Since then, the region has not witnessed economic, security and social progress, reflecting the failure of the regime and its bodies.

The head of the government of the Syrian regime, Imad Khamis, visited Daraa in August 2018 and pointed to the need to form sub-committees in the regions of the governorate to revive the agricultural, industrial and production sectors, on the basis that “reconstruction is a shared responsibility between the government and civil society.”

“The government started restoring basic services to all areas, in preparation for launching service and development projects according to a real structure,” said Khamis back then.