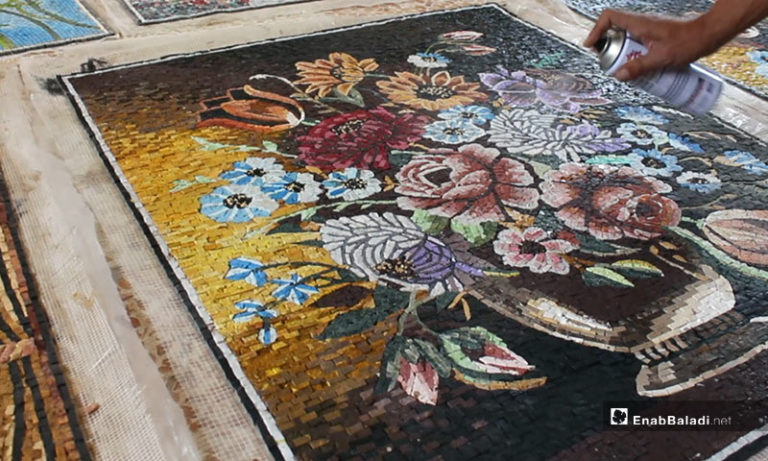 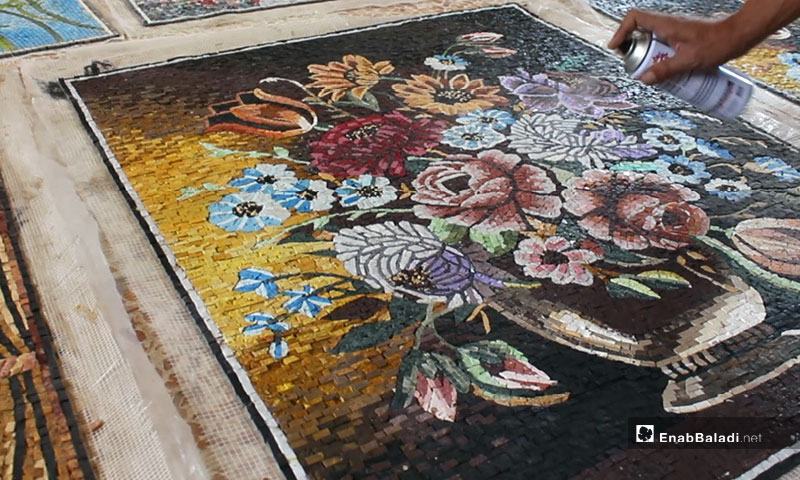 A number of mosaic paintings lay on the floor of the workshop of Abul Majd, in northern Idlib, containing geometric, floral, religious and cultural designs, whose imagination and mastery are only hindered by the concerns of war and the artist’s suffering in the lands of displacement and danger.

Hassan al-Faris sits, placing his crutch near him, to transfer the features of the requested image by the customer to his artistic portrait made of marble stones.

“I work as much as my health condition allows me,” Hassan says to Enab Baladi, referring to his amputated foot as a result of war, while talking about the “art, sensitivity and accuracy” his work requires. But his profession is hampered by “pressure” in the governorate where he resides, which is already subject to attacks by regime forces and Russia and suffers severe economic crises caused by the lack of services and high prices.

The citizens of some towns in the southern countryside of Idlib have worked in the art of mosaic since 1995, as stated by mosaic workshop owner Muhammad Kaddour to Enab Baladi. He also explained the old history of the art that dates back to the Roman Empire and its history in the region, which is rich in its monuments and paintings.

Displacement has not prevented Muhammad, a resident of Ftireh, from pursuing his work in mosaic art. He re-opened his workshop with a small number of skilled workers, who were dispersed throughout Idlib after the displacement, keeping in mind the representation of “the coexistence of religions and cultures” in his governorate, which is still described as an incubator for “terrorism” since the beginning of the Syrian conflict.

Mosaic paintings convey a “humanitarian message,” as they do not discriminate between religions and ethnicities. They represent Syria and Idlib as they always were, without facing any prevention or targeting, for the meanings and messages they bear, as Muhammad put it.

The mosaic craftsmanship expanded to reach its peak in 2005, with more than 1,000 families depending on this art, according to a mosaic workshop owner. The man, who inherited this craft from his father, listed the countries that used to order paintings, including Lebanon, Jordan, Turkey and some European countries, in addition to the capital, Damascus, before closing the land crossings leading to it.

No art for busy mind

People in Idlib towns reached the level of creativity, and they practiced their work “with complete comfort” before the start of the revolution. Unfortunately, the circumstances and the difficulties of the war affected the psychological state of the artists, who have been frequently displaced to escape the bombing.

The work needs “calm and peace of mind,” insisted Muhammad Kaddour, but that desired comfort has not been the only obstacle facing his craft.

The problem of securing the right stones for the paintings poses a threat to their makers, who used to “simply” get them from the mountains near their southern towns, which have been under frequent bombings since February.

The problems of shipping across the crossings also threaten the profits of the craftsmen, who are obliged to pay “high” fees to transport their goods to customers around the world.

However, the demand for Idlib’s paintings continues, Muhammad said, as customers continue to send the images they want via WhatsApp, to be manually converted, with patience and accuracy, into time-defying stone paintings.