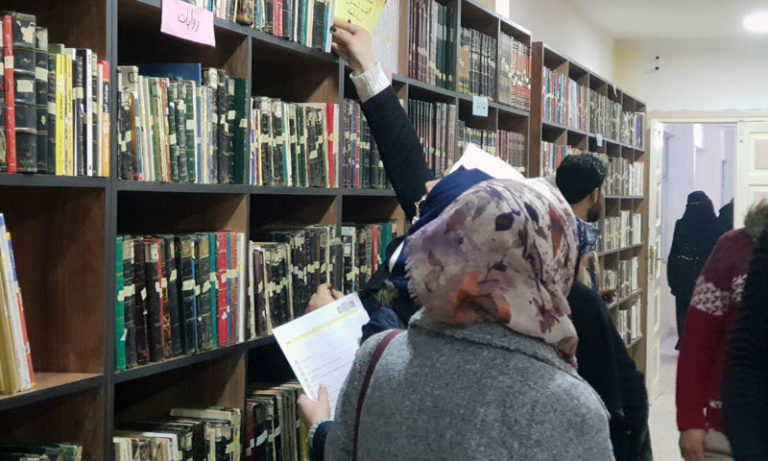 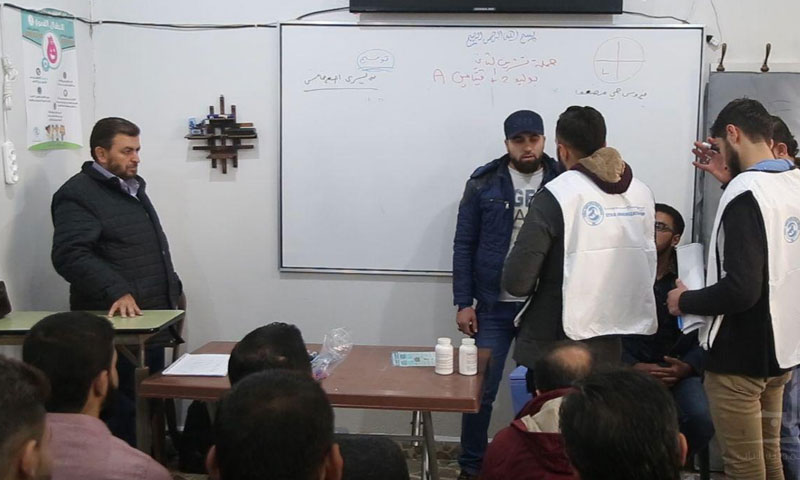 Enab Baladi – Aleppo countryside | The Local Council of al-Bab city has completed the rehabilitation of the staff of a vaccination campaign against polio and measles in several towns and villages in the northern countryside of Aleppo.

The children-oriented campaign was launched in al-Bab city, and in the villages of Bza’a, Qabasin and al-Rai on 30 November , as a preventive measure to reduce the possibility of children’s infection with the two contagious diseases.

Children under five receive vaccines as part of a campaign organized by al-Bab City Local Council, which provides oral polio vaccine and vitamin A capsules in two categories.

The first category of the vitamin vaccine, which is intended for infants aged between six months and one year, is a blue capsule of 100,000 milligrams dose. The second category, for children from one to five years,is a red capsule of 200,000 milligrams dose, according to the supervisor of the vaccination campaigns of al-Bab city, Dr. Mohamad al-Saleh.

The importance of the vaccines given during the campaign lies in their contribution to the “cumulative” increasing of children’s immunity with repeated doses, according to the doctor.

Vitamin A doses support immunity in general, and prevent serious measles admixtures, and ophthalmic as well as respiratory complications. This means that they reduce the symptoms of the disease, decrease the child’s recovery time and prevent the risk of post-measles infections, as some infections develop and reach the stage of blindness or lead to the development of pneumonia, which requires the transfer of the infected child to the intensive care unit, according to the doctor.

The vaccination campaigns organized by the al-Bab City Local Council were preceded by the preparation of more than 100 mobile teams and five fixed teams in the centers of al-Bab, Qabasin, Bza’a and al-Rai, during five days starting from 23 to 28 November.

Each team consists of two members, one for vaccination and the other for registration, for an estimated 61,000 targeted children.

Hassan al-Mawla, a trainee in the team, talked to Enab Baladi about his two-phase training period, during which he learned how to deal with parents, how to convince them of the importance of the vaccine and the need to stick to the dates of each vaccine. He was also trained on how to give the vaccine for each age category.

The importance of the training lies in preparing trainees on the campaign protocol, such as the marking method (marking a child’s finger after vaccination) and sticking papers on houses to raise the parents’ awareness about the importance of the vaccine, according to Dr. Mohamad al-Saleh. This is in addition to the training on how to fill records, return to those who missed the vaccine, correct or compensate for defects, if any, during previous campaigns, and add new scientific information or method of work.

Besides, the trainings help to define the campaign’s working method, on which teams are evaluated by campaign supervisors and neutral observers within the Qatar Red Crescent.

Polio is a contagious viral disease that affects the nervous system and can lead to lifelong paralysis or death. It is transmitted from the stool of an infected person to others through hands, food and beverages contaminated with the virus.

It is considered as a serious disease because it causes lifelong paralysis. It can also lead to death and it is fast-spreading disease. The only way to prevent it is vaccination with oral and muscular polio vaccine, because it has no treatment.

Measles is a viral disease that affects the respiratory tract, turns into a serious disease if it develops, and spreads very quickly among people who did not get preventive vaccines.