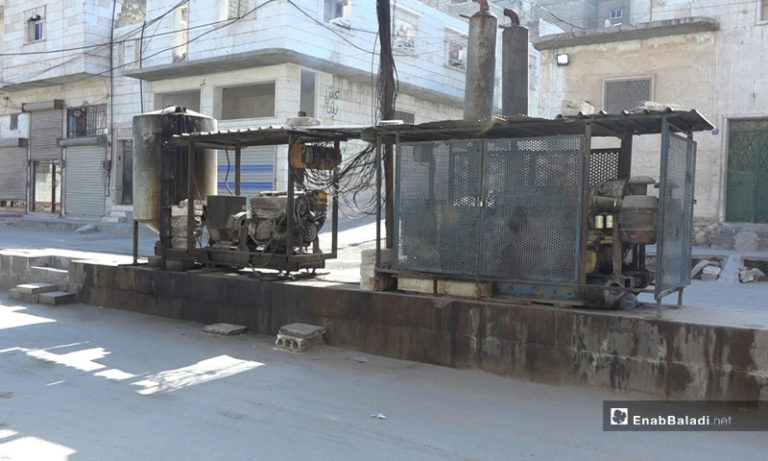 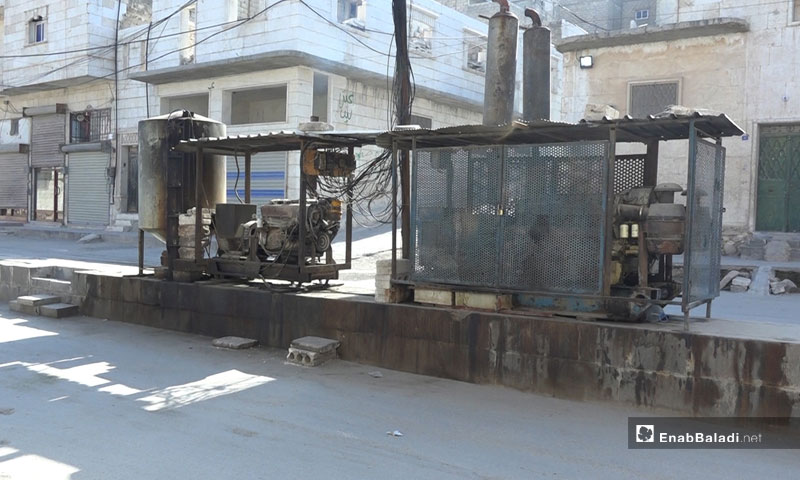 Enab Baladi – Aleppo countryside | Residents in the city of al-Bab and other areas of Aleppo countryside, controlled by the Turkey-backed Syrian National Army, resort to the use of paid electricity provided by generators working with fuel, amid years of power outages.

Enab Baladi surveyed a segment of al-Bab residents about the problem of power outages and the high prices of subscription to electricity generators through the program “Shu Michkiltak” (What is Your Problem), which it broadcasts through its social media platforms, on Monday and Friday every week.

Electricity generators work in al-Bab from 10 am to 11 pm, and the process of transferring electricity is carried out by pulling an electricity cable from shops dedicated to the sale of electricity through generators, which became widespread in residential neighborhoods, because they became a main source of electricity.

Recently, the price of the ampere subscription (a unit used to measure electricity) has risen because of the merchants’ monopoly of fuel. This is in addition to the Turkish military Operation Peace Spring in the east of the Euphrates region, launched on October 9, which led to the disruption of the road linking the cities of al-Bab and Manbij, north of Aleppo, according to the survey.

The duration of electricity operation at home or in stores depends on the number of hours of subscription, upon which the seller and the customer agree.

Some of the residents in al-Bab told Enab Baladi that for the past three years, the city’s Local Council has made several promises to operate the city’s regular power line, but has not kept its promise, as they put it.

A number of electricity vendors stated in the survey that they were working 24 hours a day. However, in the last two months, their working hours have decreased because of the lack of fuel and its high prices. They also attributed this to the disruption of the road between al-Bab and Manbij.

Mohammed al-Assaf, director of the Power and Electricity Company in al-Bab, told Enab Baladi that the company is working hard to provide regular electricity.

“The company is working extending a high-tension electricity cable from the border with Turkey to Syria, and there is ongoing maintenance work,” added al-Assaf.

He pointed out that the main electricity transformers in al-Bab were destroyed as a result of the battles the city witnessed years ago. He also stressed that there is a theft of the electricity lines, which hinders the company’s work.

The al-Bab Local Council in the eastern countryside of Aleppo signed in March an electricity-renting agreement with the Turkish company AK Energy, which includes the maintenance of electricity networks in Bza’a, Qabasin and the entire countryside.

According to the agreement, electricity was supposed to arrive in al-Bab city by summer. This means that the residents will get rid of electricity amps burdens and the associated need for the availability of fuel. However, the director of the Power and Electricity Company promises that regular electricity will reach the houses by next year.