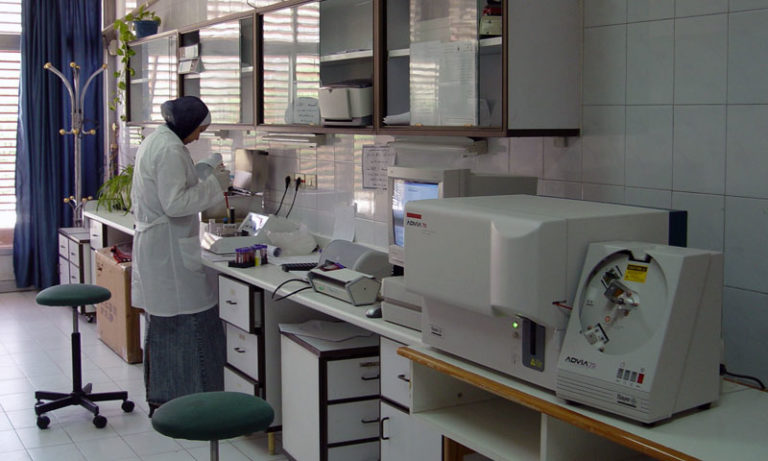 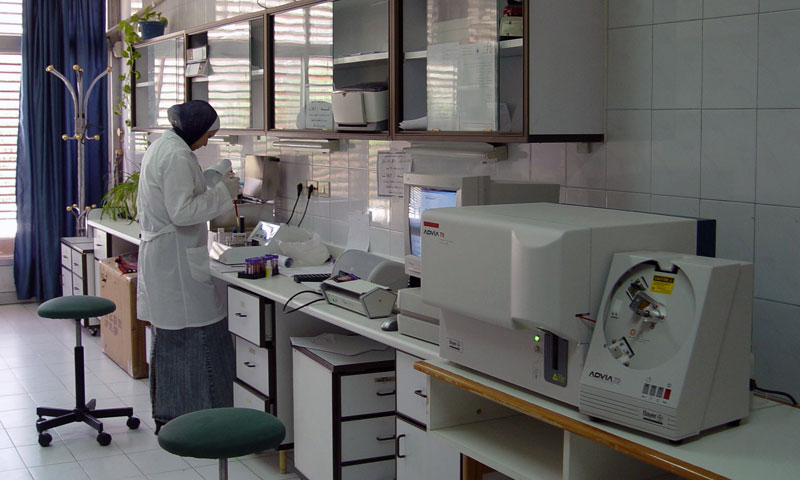 Enab Baladi – Daraa | “At the beginning of doubting whether the lump was infected or not, I sent a sample of it to the capital Damascus through a lab at my own expense. I waited a week until the result came,” said Umm Abdo, 55, a Daraa resident who has cancer, explaining that she preferred to send the sample through the laboratory to avoid the struggle of traveling and waiting, and wishing that a laboratory would be available in Daraa Governorate.

Hussein Muhammed, 40, was also forced to send samples through the laboratory, and he was surprised that an entire governorate has no such laboratory.

These two patients’ case is similar to many patients in Daraa, who need pathological anatomy analyses, after the governorate was devoid of specialized laboratories in this field. These patients resort to sending samples or traveling to laboratories, when they need to conduct an analysis of tumor or a matching nerve tissue. In both cases, this is considered financially costly and physically arduous for the patient.

What is the reason for the lack of such laboratories?

A laboratory specialist in Daraa, who refused to be named, attributed the absence of a special pathological anatomy laboratory to the absence of economic viability (profit). This is because such a laboratory is specialized only in the analysis of solid tumors and nervous tissues, and if a person wishes to donate a kidney to another person, he must carry out an analysis of matching nerve tissues, which is not available in Daraa.

“Because of the scarcity of cases, this is not profitable for the private sector, unlike the capital, which is densely populated, and to which samples are sent from all governorates. Also, this type of analysis needs a laboratory and a specialized doctor,” explained the laboratory specialist.

Samples are shipped from the laboratory in Daraa to a specialized laboratory in Damascus, and the lump (the sample) is preserved with chemical solutions (physiological serum, ethanol, and formaldehyde), and is also kept in a refrigerator that provides the required temperature. This rids the patient from the burden of traveling and waiting for the result in Damascus, which needs several days.

The work of laboratories in Daraa is limited to analyzing all vital fluids, such as blood, urine, spinal fluid, and other fluids such as pulmonary pleura, ascites, and pericardium.

The costs of medical analyzes increased according to an official bulletin to 300 Syrian Pounds per unit of analysis, at the beginning of November, based on a letter from the Ministry of Health and the General Authority of Laboratories.

The letter added that the survey on the amendment of the laboratory unit price was the result of the request of 80 percent of the participants.

The sample analysis is divided into a number of units, such as a two-unit blood sugar analysis, and some analyzes may reach 30 units, which caused complaints and disapproval by the auditors for whom the analysis costs seemed to be inflated.

The price of the unit analysis before 2011 was approximately 50 Syrian Pounds, which is equivalent to one dollar at the time.

In spite of the concerned parties’ disapproval, the laboratory specialist interviewed by Enab Baladi believes that most private laboratories prefer to rely on imported laboratory materials, which costs their owners higher costs than relying on local materials. He highlighted the difference in the prices of medical consumables and the quality of devices according to the producing countries.

Haitham Khalil, a resident of Daraa, told Enab Baladi that “the costs of treatment have become high in general, starting from the doctor’s visit to the medicine. I was recently surprised by the high costs of the analysis. We became afraid of the disease and take consideration about the cost of the treatment more than the disease itself.”

Khalil stressed that the price of the same analysis he conducted last month increased three times at the beginning of this month, adding, “Everyone is working on earning the dollar.”

The suffering of Umm Abdo, the cancer patient, increased after the decision to raise the price of the unit analysis, as cancer patients need periodic analyzes. After the increase of the laboratories’ costs, the financial burden has become overwhelming for Umm Abdo, and she is waiting for a “relief energy” that would end her pain.